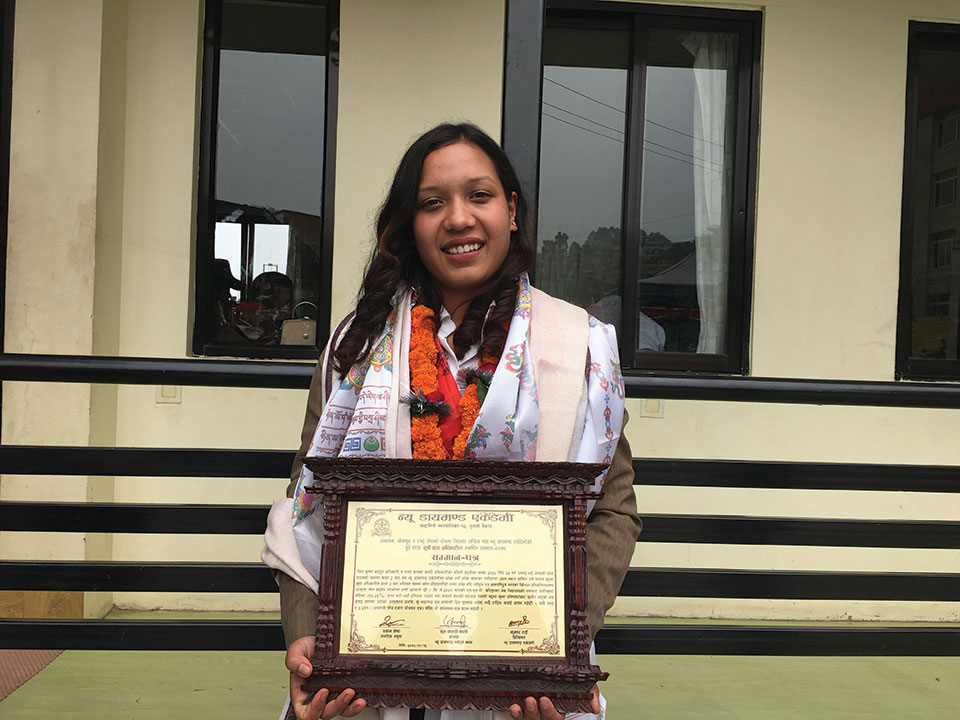 KATHMANDU, April 27: With women’s volleyball tournaments mushrooming in recent years and the then government of Prime Minister Pushpa Kamal Dahal declaring volleyball as the country’s national sports on May 23 last year, the investment of the private and the government sectors has now increased significantly.

Women’s volleyball is a popular category in the game and the women’s team of Shivam New Diamond Academy goes hand in hand when it comes to volleyball. Even though the players of the New Diamond look normal on paper, they have been giving tough challenge to the big teams in recent times.

Also, the players of New Diamond are selected for the national team as the first choice. New Diamond Academy School has become successful in gaining praises throughout the country as it has been displaying brilliant performances in the national tournaments.

Kripa Adhikari, who has remained a key player in the success of the New Diamond, handed over her number two jersey to team member Riya Kunwar amid a program on Thursday.

Adhikari, who passed her written examinations for the second lieutenant of the Nepal Army, officially waved goodbye to the team in the program.

Adhikari, who had been studying in the New Diamond Academy from Grade 2, got associated with volleyball when she reached Grade 5.

Adhikari said she had to overcome a lot of struggle to enter the sports sector due to conservative society.

“I aspired to play volleyball inspired by seniors playing the game, and I achieved that dream by playing for fun when I reached Grade 5. Since lifter Bina Moktan left the team, I have been carrying that responsibility for the team. I got better role and the team started to achieve success in different tournaments,” said Adhikari. “I always used to be first in studies, but since I got involved in volleyball, I stood second in the finals of Grade 5 and my parents had decided to stop me from playing volleyball as they thought my studies would be affected badly.’’

As her overhead passing was good, coach Kumar Rai convinced her parents to allow her to play volleyball. “I started training regularly after that and took my studies along with it. Coach Kumar Rai was my inspiration and my responsibility as a lifter to the team inspired me to get involved in volleyball and I got a chance to take part in the national and the international tournaments,’’ she said.

Adhikari expressed her determination to keep on playing volleyball even after the trainings for the second lieutenant. She made her debut in the international level against Maldives in a friendly match and has participated in the 12th South Asian Games (SAG) and the World Women’s Qualifiers matches for the national team.

Rai said that his team has been added a new responsibility of producing new players after her departure from New Diamond. “It certainly affects the team when a good player leaves, but since the players should be allowed to take a decision about their long-term future plan, we have to bid farewell to such a player,’’ he said.

Likewise, New Diamond skipper Lalita Nath said that even though the team may be affected due to Adhikari’s absence, they should take it as a strength to stand tall in the tournaments.