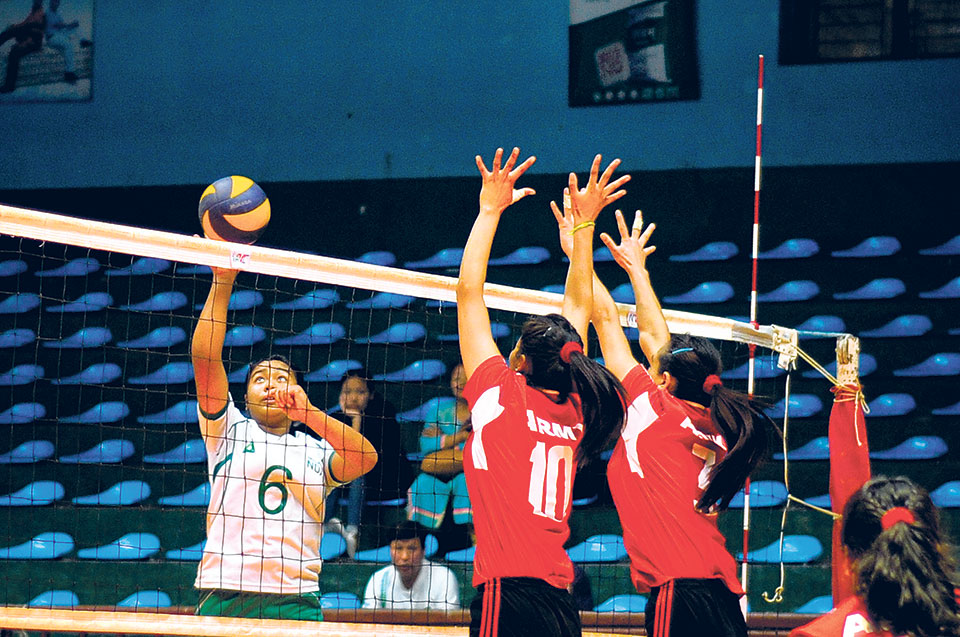 Pratibha Mali (white) of Shivam New Diamond plays a shot against Tribhuvan Army Club during a group B match of the KNP Japan Women’s National Volleyball Tournament at the NSC’s Covered hall in Tripureshwor on Sunday. Photo: Bijay GajmeR/Republica

At the Covered Hall of the National Sports Council (NSC), New Diamond, who was defeated by the other departmental team Nepal Police Club 3-1 in the curtain raiser on Friday, reached the last four as runner-up of Group B.

In the three-team group, Police reached the semifinals as the winner, while Army has been knocked out of the tournament after losing both its matches.

New Diamond will now take on the defending champion and the winner of Group A, Armed Police Force, for a final place.

In a tightly-contested match, New Diamond won the first set 25-19, but lost the second 25-19. It won the third set 25-18, but lost again in the fourth 22-25 to give away the lead and make the score 2-2. New Diamond played brilliantly from the start in the last set, winning it 15-10 to reach the last-four of the competition.

After the win, New Diamond captain Lalita Nath said that despite the absence of lifter Kripa Adhikari made them struggle, they played well in the match. “We are trying to come back to our matches after the loss of the team’s regular lifter Kripa and our new lifter is getting experience,’’ Nath added. “We are hopeful of getting back to our form by catching the rhythm of the game.’’
“We have less time to train. Pratibha Mali and Panmika Rai are also busy with their high school examinations. They will play in the competition after finishing their exams,’’ Nath further said. “We have a semifinal match against Armed Police on Monday and we will present a good game with full confidence.’’

Likewise, New Diamond head coach said that his team performed better against Army, than they did against Police. “We are feeling the absence of Kripa and we will still need a year to bring a player like her in the position. We are working hard in order to do that,’’ Rai further added.

Army head coach Kapil Kishor Shrestha said that his team had to face a defeat after failing to understand the situation of the court. “The weaknesses we have seen in the past are still there. Players were very afraid while playing and there was a lack of combination inside the court between them.

That was the main reason for the loss,’’ Shrestha said.  He was confident that the Army team will defeat Armed Police in the coming days.

In the Group A match played on the same day, Western Region Volleyball Association saw off Jawalakhel Volleyball Training Center in a straight set of 3-0 to reach the semifinals as the runner-up. Western beat Jawalakhel 25-13, 25-20, 25-20.

Western will now take on the winner of Group B, Police, in the last four.

In the tournament that will conclude on Tuesday, organized by the Sher Bahadur Memorial Foundation, New Diamond will face Armed Police in the first semifinal, while Nepal Police will take on Western in the second on Monday.

Friends', Army into U-18 semis

KATHMANDU, June 8: Friends Club and Tribhuvan Army Club have advanced to the semifinals of the ongoing Lalit Memorial U-18 Football... Read More...