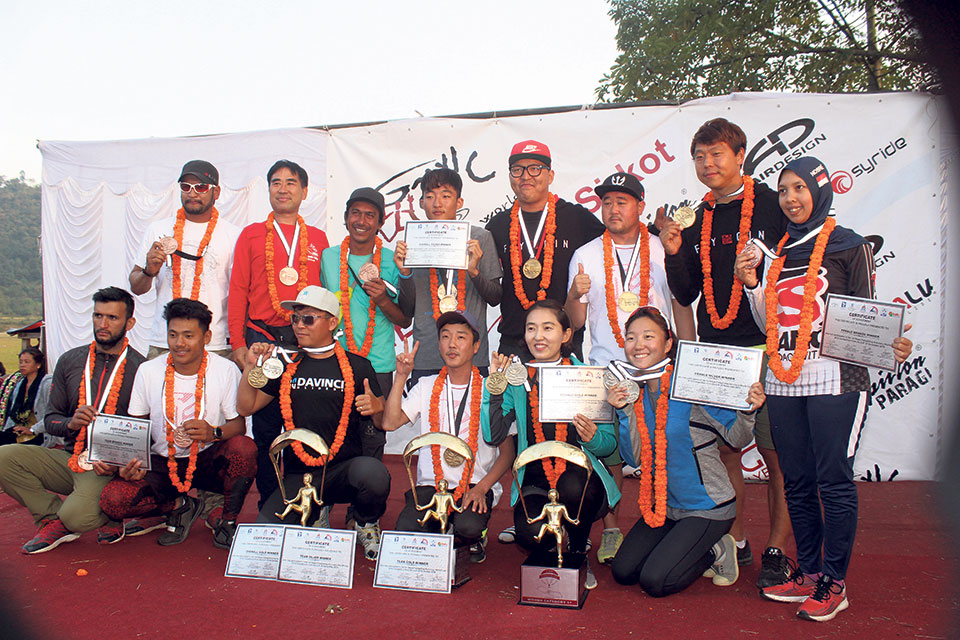 Winners of Paragliding Accuracy World Cup pose with their trophies and medals in Sworek, Syangja on Sunday. Photo: Mohan Gurung/Republica

POKHARA/SYANGJA, Nov 5: Korea has dominated the overall event in the Paragliding Accuracy World Cup (PGAWC) in Sworek, Syangja in the last day of the tournament on Sunday. The Nepali players could not get to a better position despite displaying an improved performance compared to the fifth round, finishing sixth at last.

Korea’s Jihun Yoo and Kim Ki Hyeon became second and third. They both shared the same spot with 15 points at the end of the last round and an additional round was played to settle their position. Yoo got two points and Kim got seven, informed member of the judging panel Bal Krishan Batsyal. Yoo got Rs 98929 (€750), while Kim was rewarded with Rs 65952 (€500).

Nepal’s Yukesh Gurung finished eighth with 33 points in the same event. Gurung, who was in the 10th position at the end of the fifth round, displayed an improved performance in the last round and finished eighth.

Babu Adventure HQ head coach Sano Babu Sunuwar said that finishing in the eighth place despite of less practice is a good thing for Nepal. “The condition of Nepali players is very poor. Despite of that, the Nepali players did well in the home territory,’’ Sunuwar said, “The players also got the advantage of home ground.’’

Sunuwar added that the Nepali players would not have done this well, had they had they play in foreign territory.

“Practice is the thing that is lacking the most. Paragliding requires taking off and landing as it a regular activity of the game. It needs consistency in that,’’ he added, “This tournament has given more excitement to the Nepali players who competed against the likes of capable players of foreign countries. ’’

A total of 67 players participated in the overall event.

However, Nepal-I finished third in the team event. Korea also became first and second in the event. Korea’s Gingliders led by Changmin Lee became first with 93 points and won the title. The team was rewarded with Rs Rs 197,858 (€1,500). Korea’s Davinci led by Sanggyu Lim finished second in the event with 164 points and took a purse of Rs 158286 (€1,200).

Nepal-I led by Gurung became third with 284 points and got Rs 92,333 (€700). The Nepali team consisted of Bijay Gautam, Bishal Thapa and Bimal Adhikari too.

These are the same players who won a silver medal for Nepal in Paragliding Cross Country event at the 2018 Asian Games in Indonesia.

In women’s event, which was participated by less number of players, Korea dominated too. Korea Hyunhee Kim became first with 59 points by improving her performance from the fifth round as she was third there. Korea’s Eunyoung Cho, who was top at the fifth round, dropped to second with 74 points. Also, Indonesia’s Gita Rezky U Guntari finished third with 211 points.

SYANGJA/POKHARA, Nov 1:  The Paragliding Accuracy World Cup (PGAWC) is being held from Thursday in Syangja. The tournament is being held for... Read More...

SYANGJA, Oct 13: The First Nepal Paragliding Accuracy World Cup-2018 is all set to be organized in the open grassy... Read More...

KATHMANDU, Nov 17: Shankarapur Paragliding, Kathmandu’s first paragliding company, is planning to organize a paragliding tournament in the valley in near... Read More...