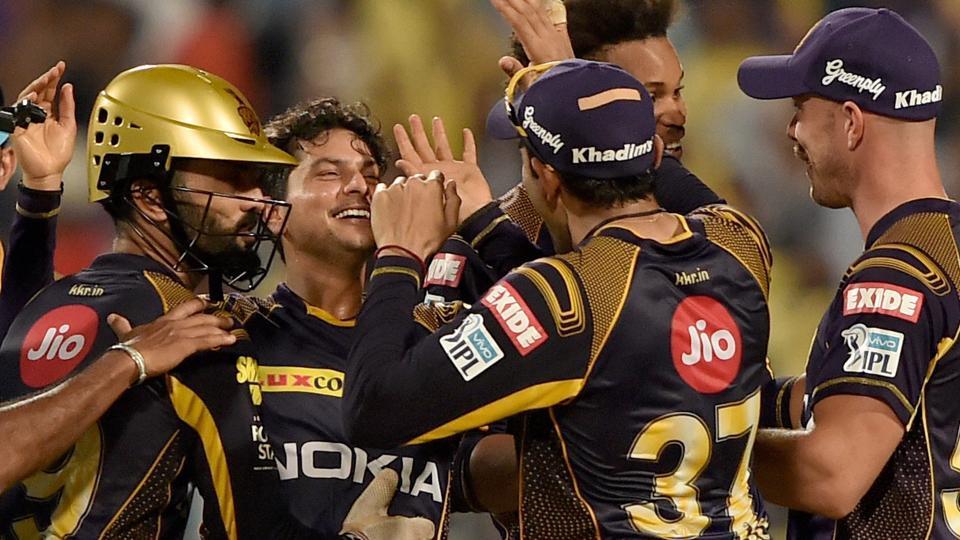 Kolkata Knight Riders bowler Kuldeep Yadav celebrates with teammates after the dismissal of Rajasthan Royals' Ben Stokes(unseen) during their IPL 2018 match in Kolkata on Tuesday. (PTI)

May 16: Kuldeep Yadav got his mojo back when Kolkata Knight Riders (KKR) really needed it; his spell of 4/20 at Eden Gardens on Tuesday effectively denting Rajasthan Royals’ (RR) hopes of a playoff berth in the 2018 Indian Premier League (IPL 2018).

Chasing 143 for victory, KKR were steered to their seventh win by the ever-reliable Dinesh Karthik who was unbeaten on 41 after Chris Lynn made a patient 45 and Sunil Narine played a seven-ball blinder beginning the reply with a six and following it up with a four, six and four in the next three balls off Krishnappa Gowtham.

Yadav struck in his first over, dismissing RR skipper Ajinkya Rahane who tried to reverse sweep and was bowled. Jos Buttler too tried the same thing and those two poor shots undid all prospects of RR capitalising on a flying start during which they scored 46 runs in 10 balls dealing only in fours and sixes. After three straight wins, this was quite a reversal in fortunes for the visiting team.

From 76/1, RR went to 103/6 when K Gowtham couldn’t deal with one from Shivam Mavi that got big. From the 10th over when Buttler went, RR lost a wicket in every over till the 13th. So well did the evening go for the men in purple that they even won two reviews; Karthik calling correctly to get Sanju Samson and Ish Sodhi dismissed.

Karthik also took three catches and stumped Stuart Binny who was tempted by Yadav to go for a heave and miss it completely. When Ben Stokes failed to keep down an intended dab, Yadav ended his unchanged spell with a wicket in every over.

All this looked unlikely soon after RR were put in. Buttler produced a display of batsmanship that wowed the Eden even when it gave KKR its full-throated support. He took 28 runs off Shivam Mavi’s second over making him the only one this season who has gone for that many twice.

Mavi had started the innings with one that jagged back and bounced sharply leading to Rahul Tripathi edging and Nitish Rana spilling it at slip. He bowled at good pace and close to the body.

Buttler though made him look pedestrian. This was 360 degree batting straight out of the AB de Villiers school. The ramp shot was used twice and when Mavi aimed to go wide on the off side, he was tonked between gully and cover. Mavi went for 4, 6, 4, 4, 6, 4 after Tripathi who took 18 runs off the last four balls off Prasidh Krishna’s first over.

When Andre Russell bounced Tripathi out, RR were 63/1 in 4.5 overs. What happened thereafter showed just how quickly things can change in a T20 game.