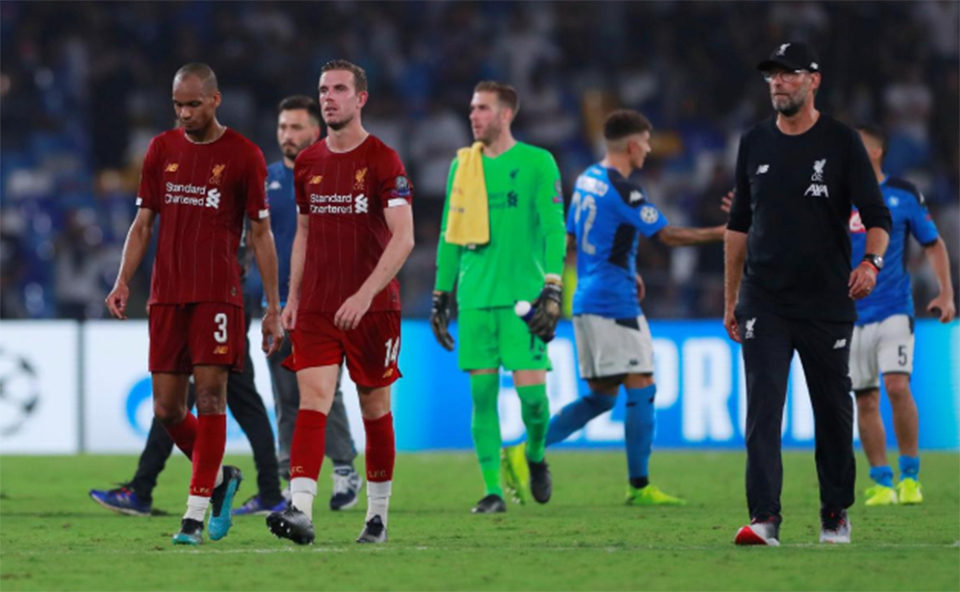 NAPLES, Italy, Sept 18: Juergen Klopp was frustrated by Liverpool’s poor finishing after his side began their Champions League title defence with a 2-0 defeat away to Napoli, who scored two late goals at the Stadio San Paolo on Tuesday.

Dries Mertens scored from the penalty spot with eight minutes remaining after Andy Robertson tripped Jose Callejon inside the box and Napoli substitute Fernando Llorente added a second in stoppage time to put the result beyond doubt.

Klopp’s side became the first competition winners to lose the opening game of their Champions League defence since AC Milan were defeated by Ajax Amsterdam in 1994 and the German was concerned by his players’ wastefulness.

“It should hurt because there were opportunities for us,” he told BT Sport.

“It was an open game with a lot of counter attacks, but we didn’t finish them off and that is a problem. In the second half it was a wild game, they were running and we were running.”

Klopp was also unhappy about the penalty awarded to the home side after Robertson was adjudged to have fouled Callejon.

“I don’t think it’s a penalty,” he said. “What can I say, for me, it is clear and obvious no penalty. He jumps before any contact, we can’t change that.”

Napoli’s Hirving Lozano headed in from close range early on but the goal was correctly ruled out for offside, before Sadio Mane forced home keeper Alex Meret into a save and Roberto Firmino flashed a header wide before the break.

But the late double from Mertens and Llorente secured the three points for Carlo Ancelotti’s side, who also beat Liverpool at home at the same stage last season.

“We worked hard to defend and attack as a unit, because at times football means adapting to situations and I think we did it well,” Ancelotti told Sky Sport Italia.

“We felt confident on the second goal, it was near the end and we were a goal up. You can press high at times, not at others, it’s about maintaining your identity and also being able to do everything. I liked our quality, but also how we played ugly when we needed to.”

In the other Group E game, Salzburg made an impressive start with a 6-2 victory at home to Genk.

Erling Haaland scored a first-half hat-trick for the Austrian champions, becoming the third youngest player to net a Champions League treble at the age of 19 years and 58 days, behind Raul (18y 113d) and Wayne Rooney (18y 340d).

Agitating IOM students stage sixth round of protest against Dean (Photo Feature)
44 minutes ago
If you want to seek your property share, go to Baluwatar: MP Agrahari
54 minutes ago