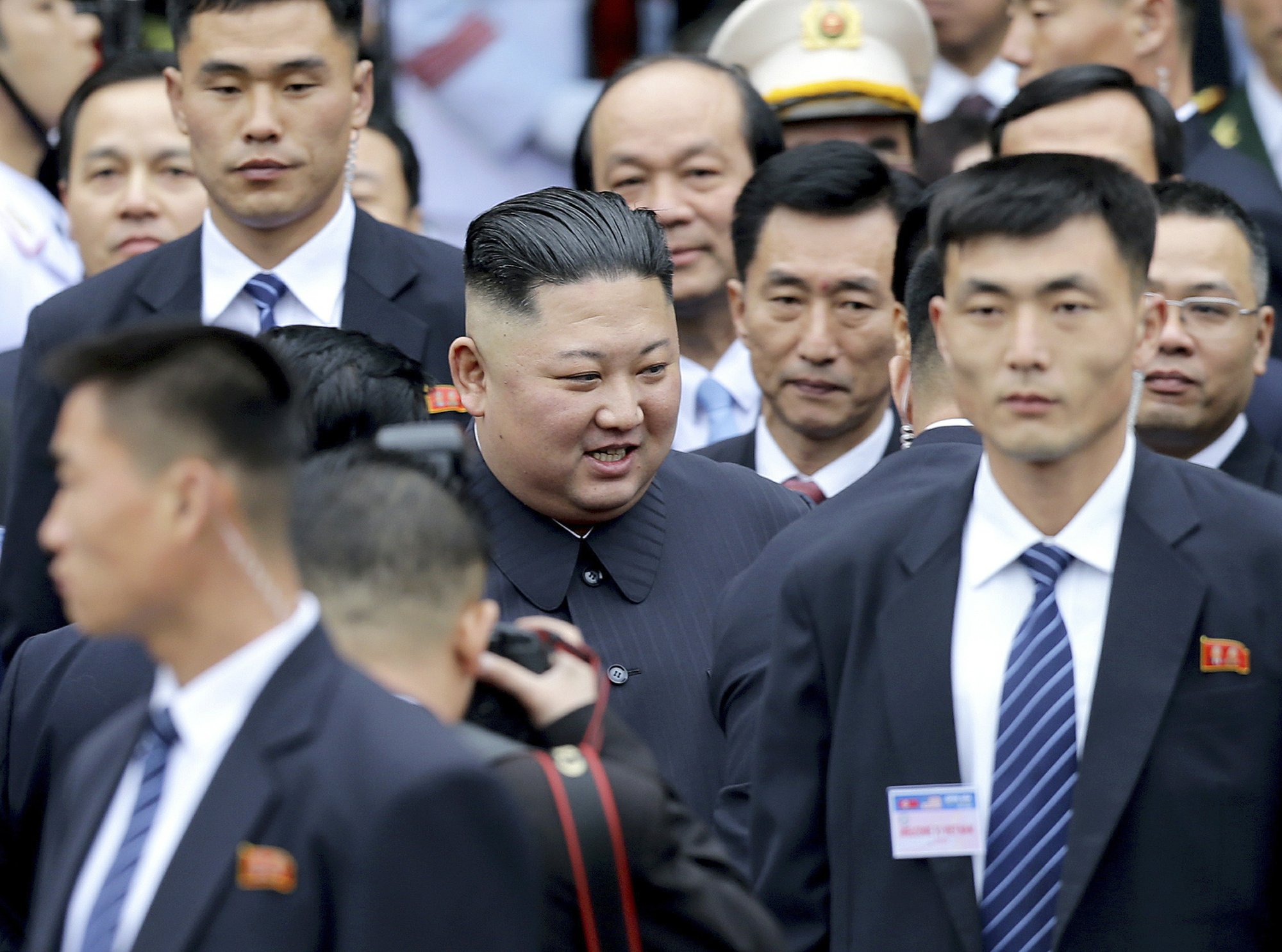 DONG DANG, Feb 26: North Korean leader Kim Jong Un, grinning broadly and waving at a crowd gathered on a cold, rainy morning, stepped off his armored train Tuesday after a long ride that started in Pyongyang and wound through China to this Vietnamese border town ahead of his second nuclear summit with President Donald Trump.

Kim, dressed in his trademark dark Mao suit, shook hands with officials as Vietnamese troops in crisp, white uniforms and black boots stood at attention on a red carpet beneath large North Korean and Vietnamese flags at the Dong Dang railway station on the China-Vietnam border.

A crowd gathered along the road near the station to wave North Korean flags and bouquets of flowers as the North Korean leader stepped into a black limousine that was then surrounded by burly, crewcut bodyguards who ran alongside their leader as he left the station. Press reports speculate that Kim will be driven to Hanoi, the Vietnamese capital, ahead of his Wednesday meeting with Trump, but officials shared no details about the specifics of a summit that the world will be watching closely.

Trump was flying to Hanoi from Washington. Kim’s arrival comes as Vietnamese officials scramble to finish preparations for a rushed summit that’s meant to deal with one of Asia’s biggest security challenges: North Korea’s pursuit of a nuclear program that stands on the verge of viably threatening any target on the planet.

Although many experts are skeptical Kim will give up the nukes he likely sees as his best guarantee of continued rule, there was a palpable, carnival-like excitement among many in Hanoi as the final preparations were made for the meeting.

Officials in Hanoi said they only had about 10 days to prepare for the summit — much less than the nearly two months Singapore had before the first Trump-Kim meeting last year— but still vowed to provide airtight security for the two leaders.

The ultra-tight security will be appreciated by North Korean authorities, who are extremely vigilant about the safety of Kim, the third member of his family to rule the North with absolute power. Kim’s decision to take a train, not a plane, may have been influenced by the better ability to control security.

Vietnam is eager to show off its huge economic and development improvements since the destruction of the Vietnam War, but the country also tolerates no dissent and is able to provide the kind of firm hand not allowed by more democratic potential hosts.

Vietnam has announced an unprecedented traffic ban along a possible arrival route for Kim. The Communist Party’s Nhan Dan newspaper quoted the Roads Department as saying the ban will affect the 169-kilometer (105-mile) stretch of Highway One from Dong Dang, on the border with China, to Hanoi.

There are high expectations for the Hanoi summit after a vague declaration at the first meeting in June in Singapore that disappointed many.

In a meeting with senior aides in Seoul, South Korean President Moon Jae-in said that the Trump-Kim talks would be a critical opportunity to achieve peace on the Korean Peninsula.

Moon, who met Kim three times last year and has lobbied hard to revive nuclear diplomacy between the U.S. and North Korea, is eager for a breakthrough that would allow him to push ambitious plans for inter-Korean engagement, including lucrative joint economic projects that are held back by U.S.-led sanctions against the North.

“If President Trump succeeds in dissolving the world’s last remaining Cold War rivalry, it will become yet another great feat that will be indelibly recorded in world history,” Moon said.

Trump, via Twitter, has worked to temper those expectations, predicting before leaving for Hanoi a “continuation of the progress” made in Singapore but adding a tantalizing nod to “Denuclearization?” He also said that Kim knows that “without nuclear weapons, his country could fast become one of the great economic powers anywhere in the World.”

North Korea has spent decades, at great political and economic sacrifice, building its nuclear program, and there is widespread skepticism among experts that it will give away that program cheaply.