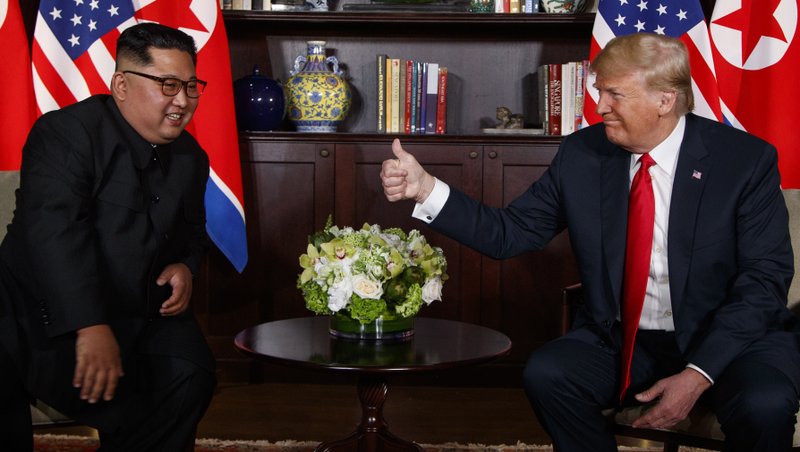 HANOI, Feb 26: President Donald Trump and North Korean leader Kim Jong Un will likely be all smiles as they shake hands later this week in Hanoi for a meeting meant to put flesh on what many critics call their frustratingly vague first summit in Singapore. But behind the grins is a swirl of competing goals and fears.

In addition to the two main players, China, South Korea and Japan also have deep interests in what Trump and Kim can hammer out in Vietnam, including the biggest question of them all: Can the U.S. and North Korea agree on what the “denuclearization of the Korean Peninsula” means — the wishy-washy language they settled on in Singapore — and, if so, can they create a successful framework that gets it done?

A look at the contending goals in a summit meant to settle the world’s most vexing nuclear standoff.

If the U.S. position is fairly clear — ridding North Korea of as much of its nuclear program as possible — it is much less certain how much Kim is willing to relinquish of what his propaganda services call the nation’s “treasured sword.”

Kim is clearly doing something different than his dictator father and grandfather.

In addition to building a nuclear arsenal that commands world attention and working to ensure economic, military and personal security, he’s also pushing to lift his nation from poverty.

To do that, he needs to find a way to ease crushing international sanctions so he can pursue engagement projects with South Korea, including two big-ticket ventures to reopen a jointly run industrial park and a tourist resort that once brought in as much as an estimated $150 million in cash every year.

North Korea also has pushed for a peace declaration ending the Korean War, which halted in 1953 with an armistice, not a peace treaty. North Korea may see this declaration, and an eventual peace treaty, as a way to eventually draw down U.S. forces in South Korea and allow the two Koreas to pursue the dream of reunification, on North Korea’s terms.

North Korea has repeatedly insisted that “denuclearization” must be a two-way street: It will not be giving away its nukes cheaply.

Kim must also be convinced of an improvement in what he sees as an existential U.S. threat to his nation’s viability — tens of thousands of U.S. troops in South Korea and Japan and a huge array of military firepower meant to protect Washington’s allies.

Despite deep skepticism about Kim’s intentions, many North Korea nuclear experts suggest that even Kim himself may not know if he will give up his nuclear weapons.

The Hanoi summit is, in many ways, a test of what the North Korean leader will be willing to accept for sacrificing this ultimate security guarantee.

Trump savored the wall-to-wall coverage of his first summit with Kim last June. But he’s under pressure to do better this time.

The U.S. president wants progress on denuclearization, even as he tries to keep expectations low, saying he has no “pressing time schedule” in mind.

At the Vietnam summit, the U.S. is likely to seek an agreement on how to start work on Kim’s previously reported statements that he’s ready to dismantle his country’s plutonium and uranium enrichment facilities.

Trump wants Kim to formalize his offer to let international experts in to verify dismantling steps at North Korea’s main rocket launch site and a nuclear testing site. Trump also would like to get back the remains of more Americans killed during the Korean War and to move toward a permanent peace on the Korean Peninsula.

Ultimately, the U.S. also wants an inventory of North Korea’s nuclear and ballistic missile facilities, equipment and material, and then an agreed-upon process for destroying them in a way that can be verified. But no one expects the two sides to reach that point in Vietnam.

No matter what, Trump the showman wants to be seen as a strong leader on the world stage, leaving behind for a moment the rancor at home over his long-sought wall on the Mexican border and the multiplying investigations into his campaign and business dealings.

Seoul has prioritized stabilizing its bilateral relationship with North Korea amid the larger nuclear negotiations between the U.S. and the North. It now hopes the second Trump-Kim summit will provide an opportunity to restart inter-Korean economic projects held back by heavy U.S.-led sanctions against the North.

In a recent telephone conversation with Trump, South Korea’s liberal president, Moon Jae-in, said Seoul was ready to restart joint economic projects with North Korea and asked Trump to consider offering them as incentives for the North to denuclearize when he meets Kim.

Moon, the son of North Korean war refugees, held three meetings with Kim last year and describes inter-Korean reconciliation as crucial for resolving the nuclear standoff. But the tough sanctions have limited the range of joint activities the two Koreas can undertake, with Washington encouraging its allies to maintain economic pressure on North Korea until it takes firmer steps toward denuclearization.

Some experts question whether Seoul’s expectations for sanctions relief for North Korea are realistic when Kim has yet to show he’s willing to deal away his arsenal.

For China, concerns about instability in North Korea, its ostensible communist ally, have long overridden worries about its nuclear arsenal. Beijing chiefly fears a collapse of the North Korean economy that could lead to armed conflict within the government and a potential flood of refugees streaming across the rivers that separate the neighbors.

China is North Korea’s chief source of assistance and trade, and any movement toward sanctions relief would be warmly welcomed by its business community.

To preserve its interests, China has sought regular contact with Kim, hosting him for three visits since the announcement of the first round of talks last year. President Xi Jinping also met Kim informally in the northeastern Chinese port city of Dalian in what some in the United States saw at the time as an act of Chinese meddling ahead of the Singapore summit.

Xi’s meetings with Kim are more convincingly seen as an attempt to help guide the process while offering encouragement and ensuring that China’s status as a key regional power broker remains intact.

Japan, which is still tormented by kidnappings of its citizens by North Korea decades ago and lies within easy striking distance of the North’s missiles, has long wanted a deal.

But not just any accord will do.

There’s worry about reports that Trump may seek an agreement that only partially targets North Korea’s missile program — for example, that would scrap the North’s long-range nuclear missiles aimed at the United States and leave in place its shorter-range missiles.

Japan also doesn’t want to be left behind as negotiations proceed. It is seen as a U.S. bulwark in the region, with tens of thousands of U.S. troops and their high-tech equipment stationed throughout the archipelago.

Japanese Prime Minister Shinzo Abe has repeatedly expressed hope that he can meet with Kim and, to make sure Japanese interests aren’t forgotten, has also worked hard to get close to Trump, so much so that Trump said Abe nominated him for the Nobel Peace Prize, something Abe didn’t deny.

President did not follow rules and procedures: General Secy Gurung
47 minutes ago

Flying drones within five km of TIA banned
4 hours ago