Khanal blitz propels Province 5 to a thrilling win over Gandaki 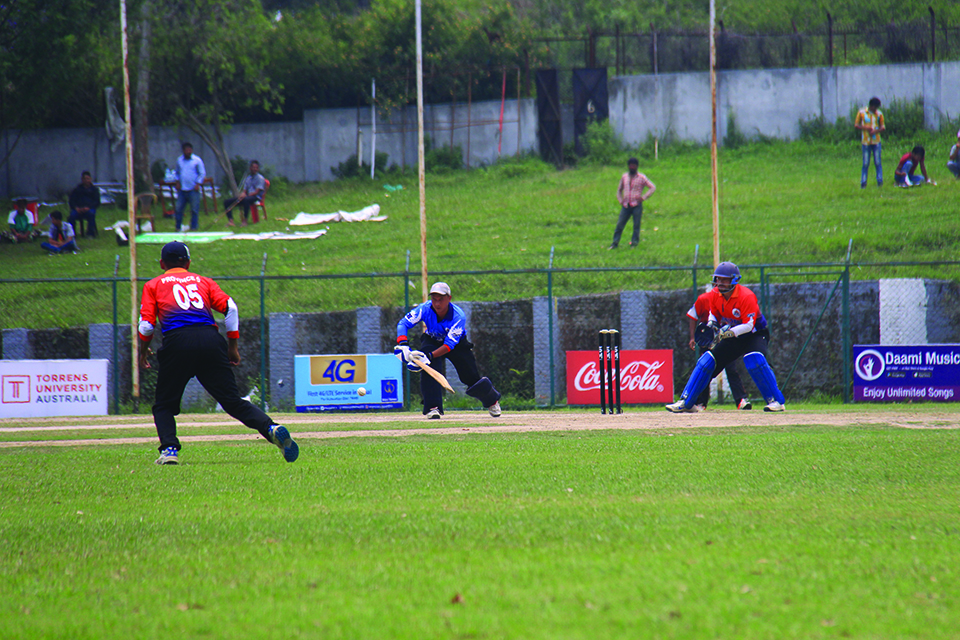 Anil Gurung of Gandaki Province bats against Province 5 during the Prime Minister Cup one-day cricket tournament at the Tribhuvan University Cricket Ground in Kirtipur on Monday.

However, Province 5’s hope to progress to the semifinals was dashed by Province 3’s win against Sudur Paschim in a match played at Mulpani Cricket Stadium in Kathmandu on the same day.
In a nail-biting finish, Khanal was the last and seventh wicket to fall during the chase as Province 5 still required two runs to win. Prakash KC kept his calm and helped his province complete the chase in the second last over of the second innings staying unbeaten on 7 runs off 5 deliveries.

Earlier, Gandaki won the toss and elected to bat first in the overcast conditions. The match was started half-an-hour later than the normal start due to wet conditions.

Gandaki’s opening batsman Anil Gurung, in arguably the best innings of the tournament so far, registered the third century of the tournament. It was a take-no-chances innings concentrating on running between the wickets rather than hitting boundaries. Gurung faced 152 deliveries, scored 115 runs and smashed five boundaries and a six during his innings. Previously, Gyanendra Malla and Amit Shrestha had scored centuries in the ongoing tournament.

Left-arm orthodox spinner Anil Kharel registered his first 5-wicket-haul as Bikram Bhusal and Krishna Karki shared two wickets each as Gandaki posted 234 runs on the board before getting all-out in 49.2 overs.

Young players helped Province 3 top the Group A points table and qualify for the semifinals defeating Sudur Paschim by six wickets in a match played at Mulpani on Monday.

Ishan Pandey scored 53 runs to help complete the chase of 155 runs in 33.2 overs whereas left-arm spinner Surya Tamang had registered three wickets in another economical spell to help limit Sudur Paschim at 154 runs in 45.1 overs.

Player of the match Tamang conceded 26 runs off his 10 overs during the first innings. Pandey smashed six boundaries during his 84-ball stay. He was supported by Aadil Khan’s unbeaten 33 runs, off 42 deliveries, to secure the win which propelled Province 3 led by Paras Khadka, who contributed 26 runs during the chase, into the semifinals.

Mahesh Adhikari, Binod Lama, skipper Sher Malla, and Bikash Aagri shared a wicket each in the losing cause. Aagri specially impressed with his in-swing to dismiss Khadka who had faced 19 deliveries to smash four boundaries.

Earlier, Sudur Paschim had won the toss and elected to bat first. Khadak Bohora once again started brightly scoring 40 runs off 61 deliveries which included five boundaries. Similarly, Roshan Adhikari and Naresh Bohora contributed 26 and 27 runs respectively to the total before getting all out in 45.1 overs.

Tamang was supported by Pratish GC and Jitendra Singh Thakuri’s two wickets each whereas Nandan Yadav and Khadka shared a wicket each.

In the last Group A match, Sudur Paschim will face Gandaki Province on Tuesday.