Kat Queens Kathmandu skipper Rubina Chhetri (left) receives the player of the match award at the end of the Women’s Champions League T20 cricket match against Pokhara Paltan Women at the TU Cricket Ground in Kirtipur on Thursday. Photo: Republica

Player-of-the-match and Kat Queens skipper Chhetri smashed unbeaten 83 runs off 67 deliveries which included record 14 boundaries and two sixes to setup a total of 152 for the loss of five wickets.

She added 64 runs with Roma Thapa for the third wicket and unbeaten 61 runs with Ishwori Bist for the sixth wicket after Paltan won the toss and invited Kat Queens to bat first. Thapa scored 19 runs off 23 deliveries and Bist not out hit 10 runs off 17 deliveries during their respective partnership with in-form Chhetri.

Anuradha Chaudhary was the pick of the bowlers for Paltan registering a four-wicket-haul conceding 28 runs off her four overs. Similarly, Kabita Kunwar scalped a wicket in four overs she bowled.

In the second innings, Saraswati Kumari and Apsari Begum shared two wickets each to bundle out Paltan for 70 runs in 16.5 overs. Laxmi Saud chipped in with a wicket. Paltan skipper Sita Rana Magar and Bindu Rawal scored 17 and 13 runs respectively while none of the other batswomen could reach double-digit figures.

Kat Queens bounced back from its first match loss against Chitwan Rhinos on Wednesday. Kat Queens will next face Biratnagar Titans in its third match of the group stage on Saturday. Similarly, Pokhara Paltan will face same team on Friday.

Pandey hit 10 boundaries and a six during her 43-ball stay to help Titans complete its first win of the tournament chasing the target of 123 runs in 16 overs for the loss of six wickets.

Pandey shared an opening partnership of 83 runs with Sonu Khadka who scored 24 runs off 26 deliveries which included two boundaries and a six.

Titans chase floundered after the loss of first wicket losing another five wickets for 30 runs. Titans lost three wickets to poor running between the wickets.

However, Asmina Karmacharya kept a cool head to guide the chase with an unbeaten 12 runs off 13 deliveries which included two boundaries.

Samjhana Khadka registered two wickets and Karuna Bhandari picked up a wicket for Falcons in the losing cause.

Earlier, Titans won the toss and elected to bowl first. Falcons suffered from poor running between the wickets losing five wickets including the top two run-getters. Titans’ fielders were sharp to take all their chances.

Mamta Chaudhari and Bhandari scored 28 and 21 runs respectively before falling victim to poor calling and running. Chaudhari faced 24 deliveries and scored three boundaries while Bhandari smacked a four and a six.

Kriti Sen and Samjhana Khadka shared a partnership of unbeaten 26 runs scoring identical 13 runs each from similar 11 deliveries and including a boundary each to take the Falcons total to respectable 122 for the loss of seven wickets in 20 overs.

Sabnam Rai and Aarati Bidari shared a wicket each for Titans.

Titans and Falcons will face Pokhara Paltan and Chitwan Rhinos respectively on Friday. 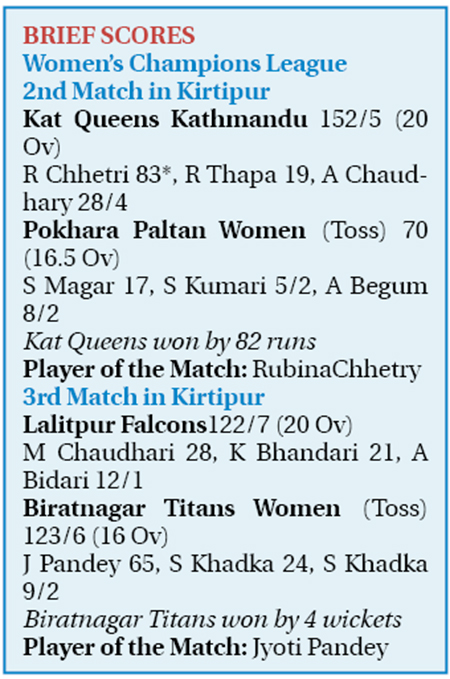 POKHARA, Oct 28: Butwal Blasters has set a target of 151 runs for Pokhara Paltan to chase in the ongoing... Read More...