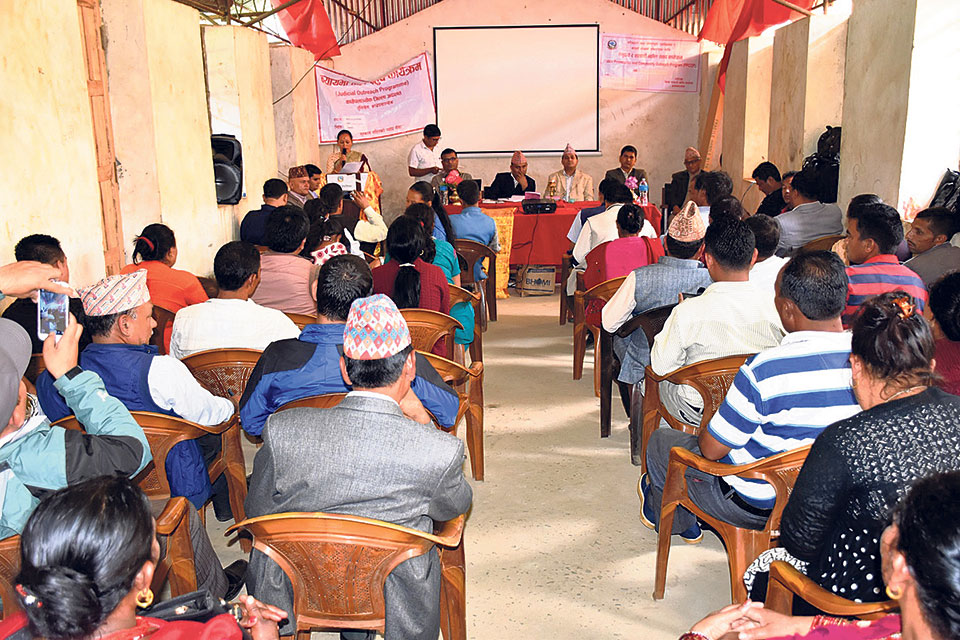 KAVRE, June 24: There are many cases pending at the district court here and in most of the cases the delay has been attributed to the justice system of the country. Such delays have even affected some development projects. However, the district here has recently announced to get the district judiciary rid of sluggishness and to provide timely justice. Arjun Adhikari, chief judge of the district, has announced that all cases filed at the court will be resolved within 18 months. Moreover, if cases are crucial and of public concerns, the time frame for resolving such cases will be a year.

“If we do not resolve cases within time, we delay justice. In some sensitive cases, taking long time to resolve is equal to denying justice,” Adhikari said. “Due to several inefficiencies cases in our court remain pending for years. We want to change it now,” he added.

Adhikari shared such resolution while speaking at an interaction program jointly organized by the district court and by the office of government lawyers.

“If people cannot come to the court, we will reach out to the people. Court cannot be everywhere, but we can make our presence felt everywhere in the district,” Adhikari stated while sharing that the extending support to the public in rural areas will help increase public access to justice.

He stated that expediting resolution of cases is important for the both parties in a case because the case is concerned with their private and social life. “We have to keep reflecting whether our just delivery system is fine; whether there are issues that need to be resolved for expediting the process. We have to be cautious with the influence of middlemen. They become influential if we fail to make the justice delivery system effective,” he added.

Elaborating further on the improvements done in the district judicial system, he said that the process is simplified to expedite cases related to domestic violence, attempt to rape, rape, human trafficking, and caste discrimination, among others. Unlike earlier, not all cases will be dealt by the court, he said. “Except for cases that need the attention of a court, cases are going to be solved on the spot following a brief process. This will make it very easy for service seekers,” Adhikari informed.

Categorizing the cases of rape, attempt to rape, human trafficking, and domestic violence as sensitive cases that need immediate attention and resolution, Adhikari said that additional attention will be provided to such cases. “We make sure that victims in such cases do not have to face much hassle and wait for years for justice. The processes, which they have to follow in court, will now be transferred to our office at the ward and rural municipality level. We are going to set up such service at the local level,” he said.

Adhikrai elaborated that to speed up the process several court formalities would now be handled at a single window. Curtailing the necessity to visit several desks for completing the formalities, will expedite the justice delivery process and enable the court to deliver its verdict faster than before, he said. “We have shortened the process in such a way that we will be able to deliver the court’s verdict in hours not in a day or more depending on the nature of the cases.”

Presently there are several processes that a justice seeker has to go from the point a case is registered to the point where the verdict is handed over. These processes often confuse service seekers. Adhikari stated unnecessary steps or less important steps have been either withdrawn or merged into other procedures for people’s convenience.

Poor and needy to get free service
Adhikari stated that poor and needy people will be availed with free legal services. Upon the recommendation of the government, the service seekers would be provided free and quick service. “We have ensured this. Everyone has right to justice and it is the government’s duty to ensure it. Upon the local government’s recommendation, poor people would be getting free service,” he said.

Speaking at the same program, District Judge Suryanath Prasad Adhikari that new acts and legal provisions will come into effect from 17 August. “165 year old acts and provisions are going to be replaced by new ones. New laws are more contextual and scientific,” he said.

Chief District Officer Krishna Bahadur Raut maintained that public awareness about their duties; rights and laws have to be raised too. “There are rights, there are duties, but without proper knowledge public cannot act responsibly or benefit from government facilities and provisions. So, awareness is quite vital,” he said.

The program held on Friday is not the first of its kind in Kavre. According to Adhikari, all the local bodies have been coordinating with the court for the mission. “We are coordinating with all the 13 local bodies. Our goal is to ensure best and quick legal service to the people,” he said.  All stakeholders including ward members, chairpersons, representatives of Ama Samuha, teachers and representatives from other sectors were present at the program.

The judicial committee was formed but I have no idea how I will carry out a judicial job without a... Read More...