Of the 9,075 total cases confirmed across the country, 4,849 cases were detected in the past one week in the Valley

KATHMANDU, Sept 26: The Kathmandu Valley witnessed as many as 724 new cases of the novel coronavirus disease (COVID-19) in the past 24 hours.

The Ministry of Health and Population Ministry (MoHP) confirmed 583 cases in Kathmandu district alone. Similarly, 78 other people from Lalitpur and 63 from Bhaktapur districts were also diagnosed with this viral disease.

With this, the total number of people being infected with the disease in the country’s federal capital has crossed the 20,000 mark. As of Saturday, the Valley has witnessed a total of 20,498 cases which account for 28.54 percent of the total infections across the country.

Nepal has so far confirmed 71,821 infections due to this viral disease which had originated from the Chinese Province of Hubei in December last year.

Though the local administration almost lifted the three-week long prohibitory orders effective from midnight of September 9, the daily-count of  COVID-19 cases has been on the rise in recent days. As many as 4,849 new cases were detected in the Valley in the past one week alone while the whole country reported 9,075 infections. 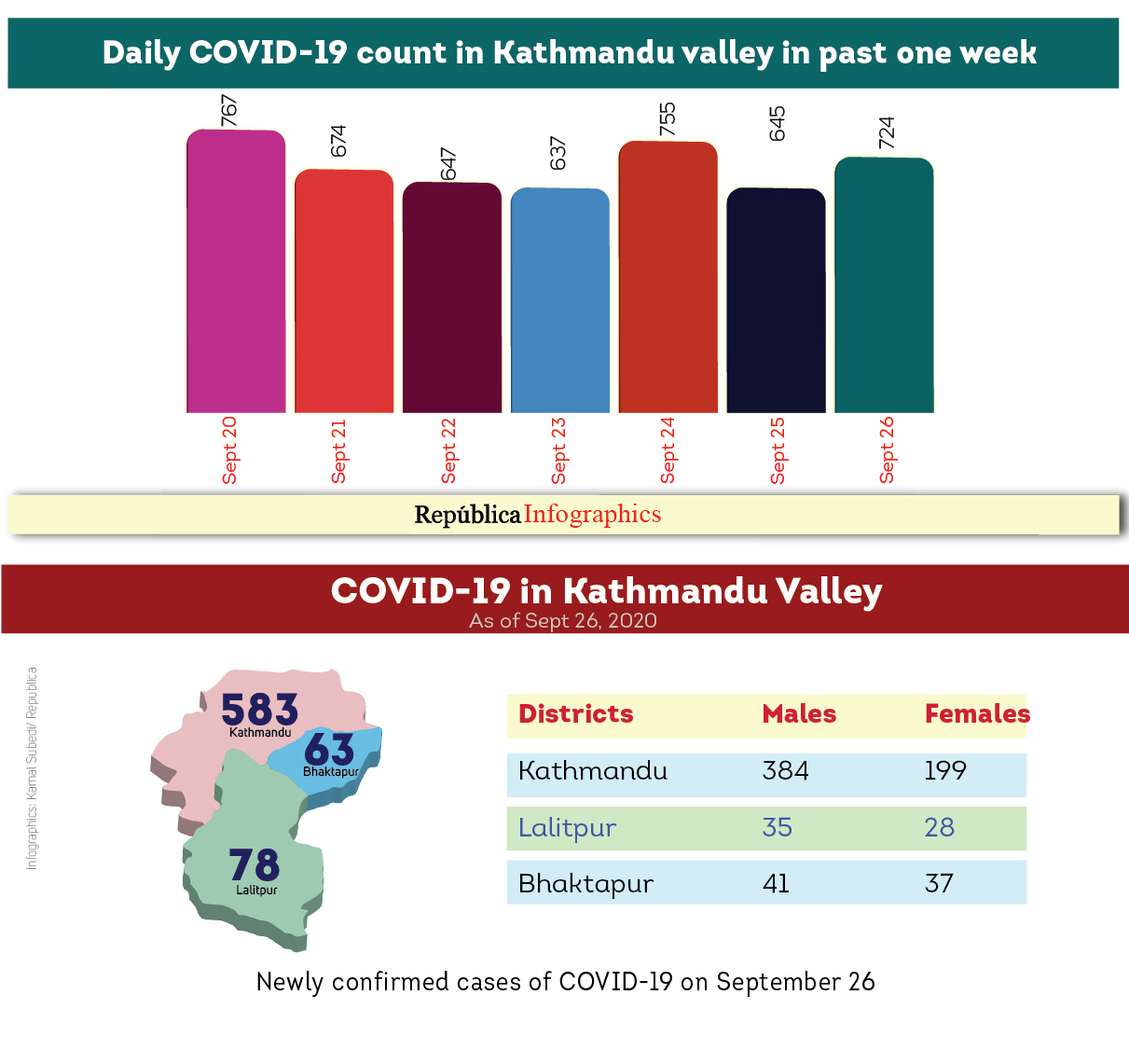 All three districts in the Valley are among the seven districts which still have more than 500 active cases of this disease, according to the updates unveiled by the ministry. The other four districts include Morang, Siraha, Chitwan and Rupandehi which share their southern borders with neighboring India.

Meanwhile, the Valley also reported four more fatalities due to this viral infection in the past 24 hours. Two males from Kathmandu and one each from Lalitpur and Bhaktapur died of the COVID-19 infection.

6,478 cases detected in Kathmandu since the enforcement of the prohibitory orders ... Read More...

KATHMANDU, April 2: Nepal recorded 11 new cases of COVID-19 along with 90 recoveries and zero death from the deadly... Read More...

KATHMANDU, Sept 4: The three districts in the Kathmandu Valley have reported as many as 454 new cases of the... Read More...