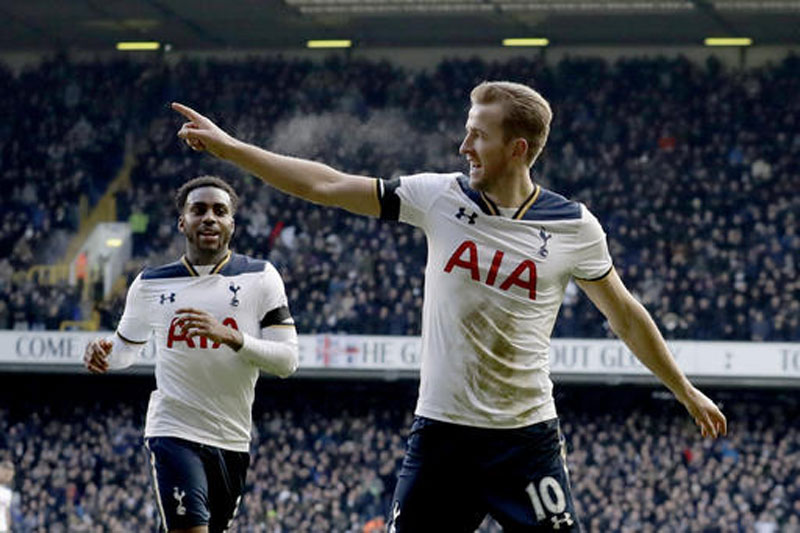 With Gareth McAuley also scoring an own goal at White Hart Lane, Tottenham rose to second in the standings.

Only a strong display from West Brom goalkeeper Ben Foster prevented a heavier loss for the visitors who didn't have a shot on target as Tottenham dominated throughout.

The warning signs were immediately apparent for the visiting side as Kane volleyed Rose's cross narrowly wide before shooting over the bar in the opening stages.

It would prove to be third time lucky for the England striker, as he latched onto Eriksen's delicate through ball in the 12th and finished with power and precision to score his 60th goal in 99 Premier League appearances for Tottenham.

Spurs doubled their lead in the 26th as a mistake from James Morrison gifted Walker the ball on the right. He found the marauding Rose, who set up Eriksen to have his shot deflected first off Jonas Olsson, then McAuley and past the helpless Foster.

The extra freedom afforded to Mauricio Pochettino's wing backs in the 3-5-2 formation he's adopted in recent weeks was apparent as Rose and Walker doubled up on the right to create the opportunity.

Foster produced a string of spectacular saves to keep the score at 2-0 until the 77th when his resistance was finally ended.

McAuley gifted Walker the chance to cross for Kane, who controlled his finish well as the ball bounced his way.

Five minutes later Kane completed his hat trick with perhaps the pick of his goals, as Alli scooped the ball over the West Brom defense for him to volley home.

The only negative for Spurs came just after the hour mark, as defender Jan Vertonghen was forced off having appeared to turn his ankle.

The victory moved Tottenham ahead of Liverpool into second place, a point above Juergen Klopp's side which plays Manchester United on Sunday.

Govt to provide up to Rs 1.5 million each to workers abroad in legal aid
34 minutes ago