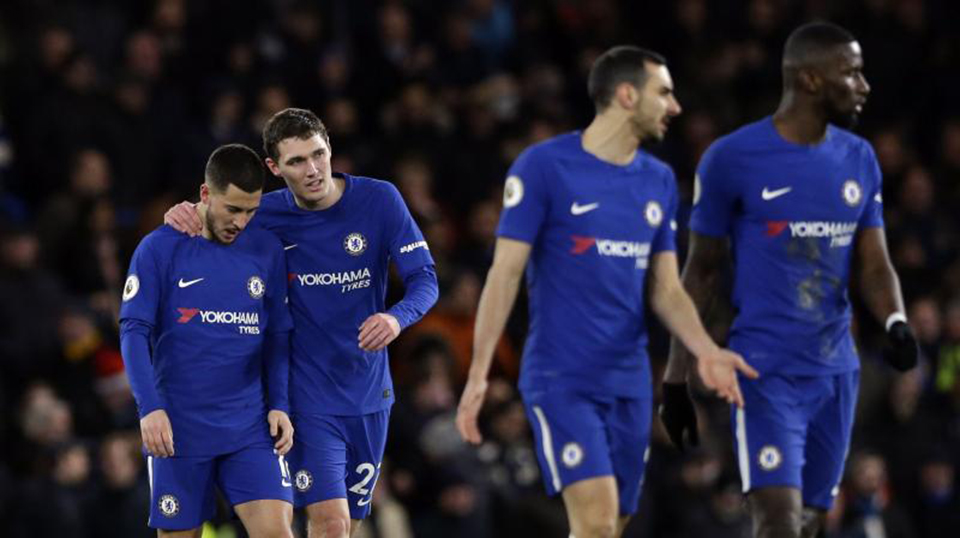 The lively Hazard twisted his way goalwards in the 25th minute before playing a neat one-two with new signing Olivier Giroud who held off defenders to place the ball for the Belgium international to smack it past goalkeeper Ben Foster.

Moses added Chelsea’s second after sprinting down the wing and laying the ball off to Cesc Fabregas, whose flick was deflected back into the Nigerian’s path.

Hazard’s second goal wrapped up the points as Chelsea moved back into the top four. In the 71st minute, he received a pass from substitute Alvaro Morata, and jinked past defender Jonny Evans to lift the ball into the net.

Chelsea has 53 points from 27 games, one point ahead of London rivals Tottenham Hotspur and a point behind third-placed Liverpool in the race for Champions League qualifying spots.

A beaming Conte, whose side had lost their previous two Premier League games at home to Bournemouth and at Watford, hurried around the pitch after the whistle, shaking hands.

The Italian, who won the title in his first season in charge, has had a strained relationship with the club hierarchy since last summer after disagreements over buying players and British media suggested he would leave at the end of the season.

But his players, so lackluster against Watford, looked energized after a week’s rest. France international Giroud, who joined last month from Arsenal, provided a target man and combined well with Hazard and Fabregas.

He left the pitch to applause in the 70th minute, his head swathed in bandages after he was kicked in a goalmouth melee in the first half.

“He is a great target man,” Hazard told Sky Sports. “Maybe one of the best in England. So we can pass the ball and go around him. He is a good point of reference. We have plenty though as we have him, Alvaro and I can play striker also.”

It was a miserable night for Alan Pardew’s West Brom side, who have won once in their last 25 Premier League games. Despite a lively start, they managed one shot on target.

The disappointment was compounded by the loss of Daniel Sturridge barely three minutes into the game. The striker, on loan from Liverpool, limped off to be replaced by Jay Rodriguez.

Chelsea is still competing on three fronts. They face Hull City in the FA Cup fifth round on Friday before meeting Barcelona in the last 16 of the Champions League on Feb. 20.