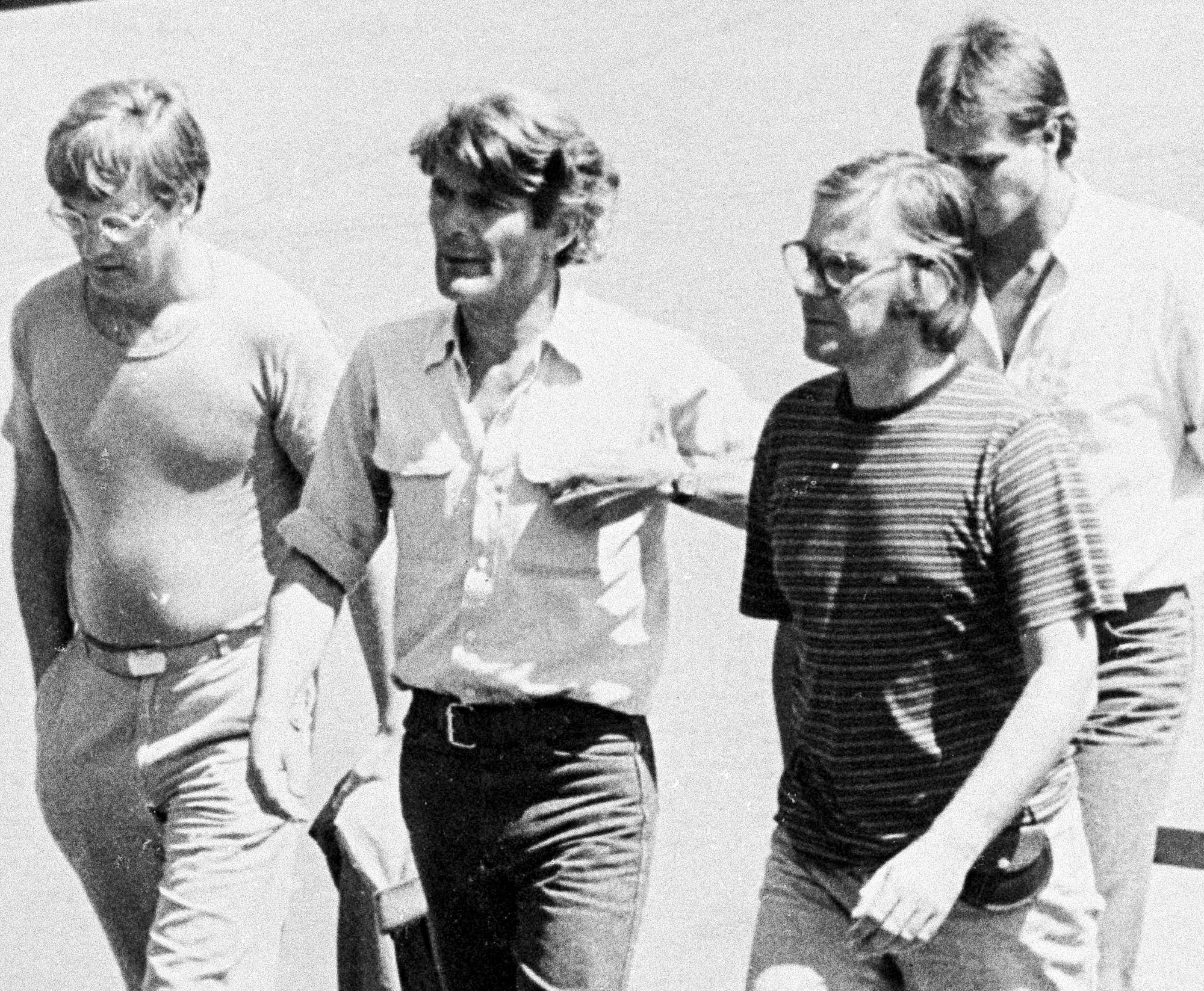 In this March 11, 1982 photo, from left, Jan Cornelius Kuiper, director, Koos Koster, producer, Johannes Willemsen, cameraman, and Hans ter Laan, soundman walk north of the capital, San Salvador, days before they were killed in El Salvador. Calls are mounting for Col. Mario Reyes Mena, a former Salvadoran army colonel, to be brought to justice for the killings. (AP Photo)

It was 1982, the height of the civil war in El Salvador. Four Dutch TV journalists had linked up with leftist rebels near the town of El Paraiso, which has an army base on its outskirts.

Planning to spend several days behind rebel lines, the newsmen hoisted rucksacks onto their backs and, carrying their recording gear, walked single-file down a narrow dirt trail.

They had only minutes to live. Lying in wait, Salvadoran soldiers armed with assault rifles and machine guns were ready to spring an ambush.

“They were sitting ducks. The military waited for them and basically executed them,” said Thomas Buergenthal, an American who was part of the three-member United Nations Truth Commission for El Salvador, set up as part of a U.N.-brokered peace agreement in 1992.

In 1993, the commission’s report on wartime human rights violations concluded that the ambush was set up to kill the journalists, and was ordered by Col. Mario Reyes Mena, a brigade commander.

Calls are now mounting in the Netherlands for Reyes Mena and others responsible for the killings to be brought to justice after a documentary shown on Dutch TV cast a spotlight on the never-prosecuted slayings. The investigative piece, aptly titled “In Cold Blood,” revealed that Reyes Mena had been living for years in relative obscurity in the United States.

“It is very much in the interest of the Dutch government to bring those responsible for the deaths of the four journalists to justice,” the Dutch foreign and justice ministers told lawmakers six weeks after the documentary aired. “Not only because it concerns four Dutch citizens who were shot dead, but also because it concerns journalists, who have an indispensable task in a democratic constitutional state.”

“The government will make every effort to achieve this result,” the ministers said.

Reyes Mena, now 79, lives in a Washington suburb. A legal resident of the United States since at least 1987, he is no longer shielded by a 1993 amnesty law that protected the military, paramilitary groups and guerrilla fighters from prosecution for human right abuses during the 12-year war. The Salvadoran Supreme Court declared the amnesty unconstitutional in 2016, though the country’s legislature is now considering granting another one.

Even before the Dutch documentary aired in September, the attorney general’s office in El Salvador had begun investigating possible criminal charges against Reyes Mena and Francisco Antonio Moran, the former head of the Salvadoran secret police who was also named in the U.N. report. The prosecutors were acting on a criminal complaint filed in March 2018 by lawyers for Gert Kuiper, a brother of one of the slain journalists, said Oscar Perez, a spokesman for Kuiper’s legal team.

“I need to find justice,” said Kuiper, whose older brother, Jan, was killed two days before his 40th birthday.

The developments come amid a growing push for justice on behalf of victims of El Salvador’s civil war, during which an estimated 75,000 civilians were killed, mostly by U.S.-backed government security forces.

In November 2017, former Salvadoran army Col. Inocente Orlando Montano, accused in the 1989 massacre by soldiers of six Jesuit priests, their housekeeper and her daughter in San Salvador, was extradited from the United States to stand trial in Spain. Several of the victims were Spaniards. He remains jailed and the trial is expected to begin later this year.

In January 2016, former Defense Minister Jose Guillermo Garcia Merin was deported from the United States to El Salvador. He is among those being prosecuted for the December 1981 massacre by a U.S.-trained Salvadoran army battalion of almost 1,000 people in the village of El Mozote, the largest massacre in modern Latin American history.

Geoff Thale, of the human rights group Washington Office on Latin America, said it is important for El Salvador to see justice done in these cases, even as the Central American country struggles with gang-related violence.

“It’s hard to imagine that Salvadorans would feel confident about the ability of attorneys general and courts to bring them justice today if they can’t bring justice in cases like El Mozote, or internationally covered cases like the Dutch journalists or the Jesuits,” Thale said. “It’s a test of the judicial system and of the rule of law in El Salvador today.”

In its report, the U.N. truth commission cited statements from officers at a military base outside El Paraiso in naming Reyes Mena as the planner of the ambush on the Dutch journalists.

An Associated Press reporter, photographer and videographer went to the town house where Reyes Mena lives in Centreville, Virginia, last month after telephone calls seeking comment about the allegations were not returned. A middle-aged man opened the door a crack and then slammed it shut without saying a word.

In the Dutch documentary, Reyes Mena accused the filmmakers of being part of a communist conspiracy for seeking answers about the killings.

“I don’t have to be talking about it. It was more than 30 years ago,” he said. The filmmakers left after a younger man standing behind Reyes Mena told them to go.

Days before their deaths, journalists Jan Kuiper, Koos Koster, Hans ter Laag and Joop Willemsen had come under the scrutiny of El Salvador’s secret police after Koster’s contact information was found on a guerrilla. Before dawn on March 11, 1982, the four were rousted in their San Salvador hotel and taken to secret police headquarters for interrogation by Moran.

A photo taken after their release later that day appeared in a local newspaper with a headline identifying Koster as “a contact for subversives,” according to the U.N. report.

Undeterred, the four pushed ahead with their plan to meet up with Salvadoran guerrillas on March 17. A German journalist drove them in a Volkswagen van from the capital to the outskirts of El Paraiso, where, guided by a young boy, they linked up with four rebels and headed down a path. The truth commission report, citing testimony of the sole survivor of the ambush, a rebel identified only as Martin, described what happened next.

“They had gone about 250 meters when they came under heavy fire from M16 rifles and M60 machine guns, coming from two hills about 100 meters away. Martin saw two of the journalists fall to the ground. They were hit by the first shots and never moved again,” the report said. Martin ran a zig-zag path to evade the bullets and escaped.

Soon after the ambush, Todd Greentree, a political officer at the U.S. Embassy at the time, met with reporters and dismissed as fiction the official Salvadoran account that the newsmen died in crossfire.

Still, Greentree says he’s “very ambivalent” about seeking justice for what he said was “obviously a war crime.”

Bringing individual officers to trial for what appeared to be a coordinated operation among different security force branches seems at best “an incomplete form of seeking justice,” he said by telephone from his home in Santa Fe, New Mexico.

Greentree said the Dutch journalists were seen by Salvadoran security forces as agents of the enemy because of a previous film that Koster made that they considered sympathetic to the rebels.

Buergenthal disagrees. “These were legitimate journalists,” he said.

Globally, journalists now face even greater peril, with the number killed in retaliation for their work nearly doubling in 2018 over the previous year to 34, according to the Committee to Protect Journalists.

Bringing those responsible to justice is “incredibly important” because it sends a message to those considering killing journalists that they won’t get away with it, Southwick said.

Buergenthal, who from 2000 to 2010 served as a judge on the International Court of Justice in The Hague, Netherlands, said the Dutch government was oddly silent about the killings for years.

“I expected, when I was elected to the court, that sooner or later somebody from the Dutch government would try to find out more about the case,” Buergenthal recalled. “Not a word. No interest shown, whatsoever. I don’t know why.”

Nepal should stay neutral; have good relations with both India and China for its security, stability: Prof. Mearsheimer
9 hours ago

Ncell converts itself into public company
5 hours ago

How do we resolve the Jammu Kashmir dispute?
11 hours ago