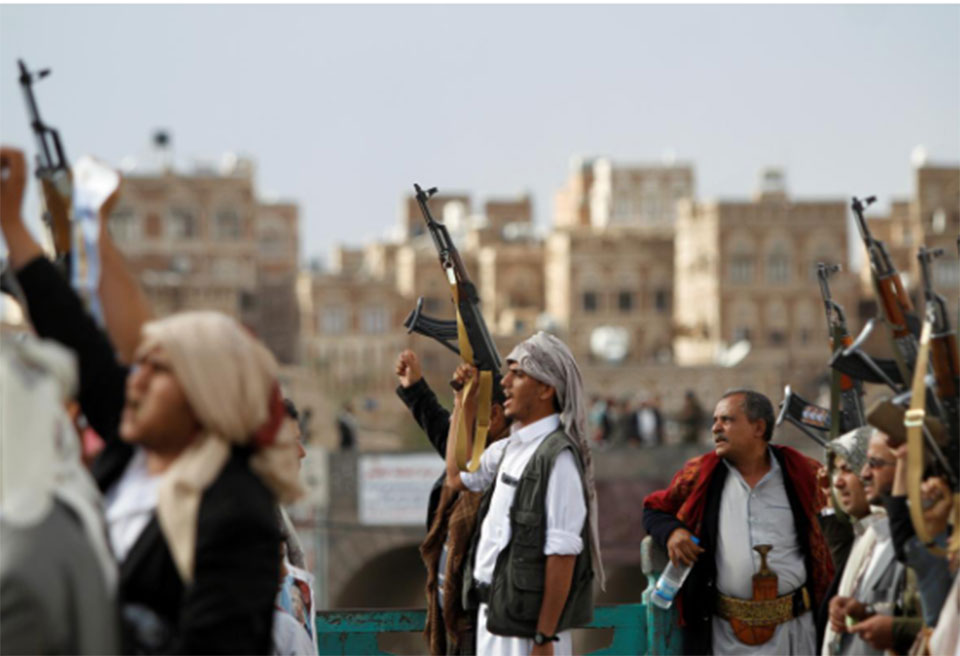 FILE PHOTO - Houthi supporters attend a rally to mark the first anniversary of the killing of Saleh al-Sammad, who was the head of Houthi movement's Supreme Political Council, by an air strike, in Sanaa, Yemen April 19, 2019. REUTERS/Mohamed al-Sayaghi

DUBAI, May 1: Amnesty International called on Yemen’s Houthi movement, which controls the capital Sanaa, to free 10 journalists held for nearly four years on what the rights group described as trumped-up spying charges.

The Iran-aligned Houthi group ousted the internationally recognized Yemeni government from power in Sanaa in late 2014, prompting a Saudi-led Sunni Muslim military coalition to intervene in the war in 2015 to try to restore the government of Abd-Rabbu Mansour Hadi.

Amnesty said the 10 men have been held since the summer of 2015 and that they were formally charged in December 2018 with a series of offences, including spying and aiding the coalition, by a specialized court that handles terrorism-related cases.

“It is completely outrageous that these men could face the death penalty simply for doing their jobs. The charges against them are false and should be dropped immediately,” Rasha Mohamed, Amnesty’s Yemen researcher, said in a statement.

Some of the journalists worked for online news outlets affiliated with the Islah party, which is part of Hadi’s government, the Amnesty statement said. Nine of them were arrested in a raid on a hotel in Sanaa while one man was detained at home by Houthi forces.

It was not clear when their trials would take place, it added.

“Over the course of their detention the men have been forcibly disappeared, held in intermittent incommunicado detention, been deprived of access to medical care and suffered torture and other ill-treatment,” Amnesty said.

The head of the Houthis’ Supreme Revolutionary Committee, Mohammed Ali al-Houthi, said in response to a Reuters’ query for comment on the report via Whatsapp: “There is no truth to what some are claiming ... Let them provide proof that these people are present and they are journalists.”

Rights groups have accused all parties in the four-year conflict, including the coalition and Hadi’s government, of carrying out arbitrary detentions.

The conflict, seen widely in the region as a proxy war between Saudi Arabia and Iran, has killed tens of thousands of people and pushed Yemen to the brink of famine.

The Houthis, who control most urban centers in the impoverished country, deny being puppets of Iran and say their revolution is against corruption.

KATHMANDU, Jan 13: A three-month-long training on Chinese language and culture for Nepali journalists has kicked off in Lalitpur today.... Read More...

DUBAI, Feb 10: Conjoined twin boys born in Yemen who were in urgent need of treatment abroad died on Saturday, the... Read More...

President did not follow rules and procedures: General Secy Gurung
12 minutes ago