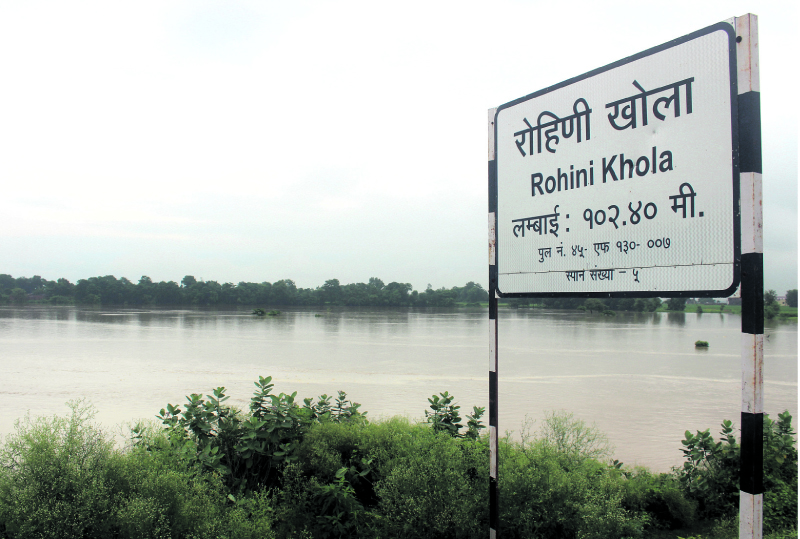 The land purchased on the bank of Rohini River through faulty procurement process has been submerged within a day’s rainfall on Thursday. The flooding in the NOC land comes in the wake its Managing Director Gopal Bahadur Khadka claiming that the land purchased was best suited for developing the oil storage depot.

Along with the land purchased by NOC through controversial deal, the swollen river has submerged surrounding land areas as well. According to the locals, the area is considered highly vulnerable to flood every year. Locals have even stopped farming there since many years for fear of flood.

NOC had purchased a total 14 bigha and seven kattha of land in the area. A former president of Petroleum Dealers’ Association said the place is in no way suitable for establishing petroleum depot. He argued  that the  cheaper land on the river bank was purchased at much higher price purely for the interest of committing financial irregularities.

Parliament’s Public Accounts Committee has already directed the Commission for the Investigation of Abuse of Authority (CIAA) to take actions against those involved in the land procurement deal, while concluding serious financial irregularities in it.

SARLAHI, August 25: Members of a parliamentary committee have said they found that at least Rs 170 million was embezzled... Read More...

BHAIRAHAWA, July 16: Nepal Oil Corporation (NOC), the country's monopoly dealing in petroleum trade, has been found to be indulged in... Read More...