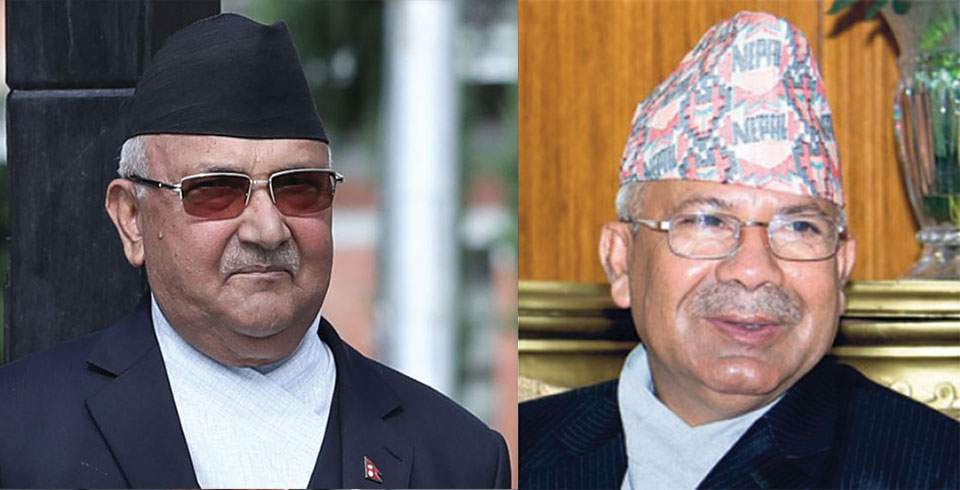 KATHMANDU, Aug 23: Days after a note of dissent was registered over the recent decisions on the order of precedence in the party, two leaders of the ruling Nepal Communist Party (NCP) KP Oli and Madhav Kumar Nepal engaged in a heated debate at a party meeting on Thursday.

Shortly after the Secretariat meeting started at the Baluwatar, Chairman Oli, who also heads the government, proposed against entering the formal agendas and deciding them. Instead, he asked another Chairman Pushpa Kamal Dahal to take decisions over the issues related to the remaining party unification process through consensus and wish him for his good health.

Nepal, who had recently registered the note of dissent at the party disagreeing with the party's decision, questioned why now they need consensus when some of the decisions were taken by the party even when he disagreed with them. Irate Oli asked not to raise questions saying he is party chairperson. Nepal again responded with 'we both are equal but you are the first among equals'.

Then Oli came down heavily against Nepal and accused him of exposing internal issues in media by distributing the note of dissent to media outlets.

“Why are you leveling baseless accusations? Let's form a committee to probe into those accusations. What kind of criminal thinking do you have?” Nepal complained. Felt embarrassed, other secretariat members tried to calm down both the leaders asking them not to engage in a blame game.

Nepal endorsed the proposal and wished for Oli's good health.

But Oli refused to accept his best wishes saying he does not need Nepal's wishes.

“How can I accept best wishes from someone who wishes my early death,” Oli reportedly refused to accept Nepal's wishes.

Oli, who had a kidney transplant one and half decades ago, has left for Singapore for follow up treatment.

Differences have soured between the two leaders after the Oli-led Secretariat demoted Nepal in the order of precedence.

Before the NCP finalized the order of precedence for top party leaders, Nepal was ranked third after two chairpersons -Dahal and Oli. But the recent Secretariat meeting decided to promote another leader Bamdev Gautam as vice-chairperson placing him in the third rank and Jhalanath Khanal in the fourth rank.

Nepal is now placed in the fifth rank after Khanal. Also, Nepal says he has felt sidelined and humiliated in the party after his trusted leaders were not included in the secretariat. Nepal has been accusing Oli of promoting nepotism and favoritism in the party to weaken his influence.