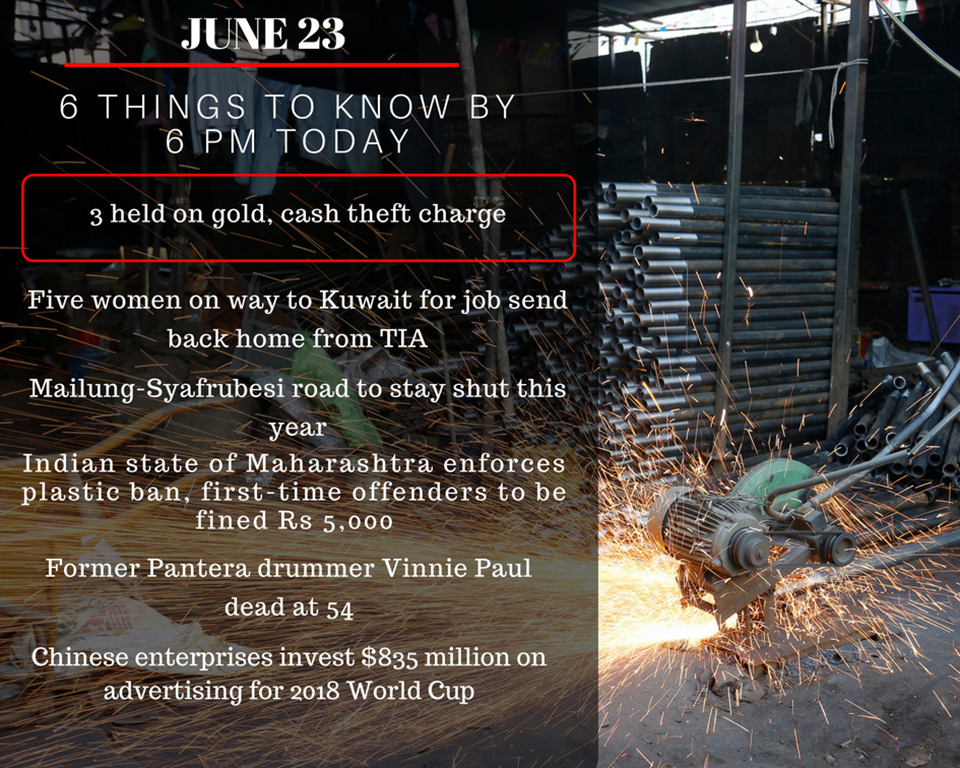 Metropolitan Police Range Office (MPRO), Kathmandu has arrested three people with stolen ornaments and cash. The arrested are Rajan Khanal, Upendra Kharel of Kathmandu and Saurav Tamang of Dhading. According to police, they had stolen ornaments worth Rs 492,700 along with cash from the rented room of Bhim Bahadur Pun.

Differing details of foreign employment prompted the Tribhuvan International Airport’s foreign employment department to send five migrating women back to their homes. The women were en route to Kuwait to work as receptionists while their labor permit documents stated otherwise; as cleaners. The Mailung-Syafrubesi road connecting Nepal with China is unlikely to come into operation this year because major work is yet to be completed. While the road had come into operation for a while, monsoon induced landslides have obstructed the road in four places. In addition, with higher possibility of accidents, the road will remain shut this year. The Maharashtra government of India enforced its ban on single-use plastic items from today. Those found carrying plastic will have to pay a fine of Rs 5,000 for the first offence, Rs 10,000 for the second, and up to Rs 25,000 and a three-month jail term for repeated violations. Those who are unable or unwilling to pay the fine will have to face court proceedings.

Pantera’s drummer, Vinnie Paul died at the age of 54. The drummer was born in Texas in 1964 and went on to form Pantera in 1981 with his brother Dimebag Darrell Abbott and vocalist Terry Glaze. Vinnie put Pantera’s unique ‘groove metal’ sound down to the way that he played with Dimebag, rather than the bass player. Vinnie is currently ranked 9th in Ranker’s crowd-voted Best Metal Drummer of All Time list. Chinese enterprises have invested $835 million on advertising for this year’s Russia FIFA World Cup, according to statistics released by Zenith Group. This figure accounts for nearly 35 percent of total sponsorship deals signed for this year’s quadrennial football competition.  About 55 percent of people are willing to buy products from World Cup sponsors, and 60 percent of them believe in the influence of these brands.