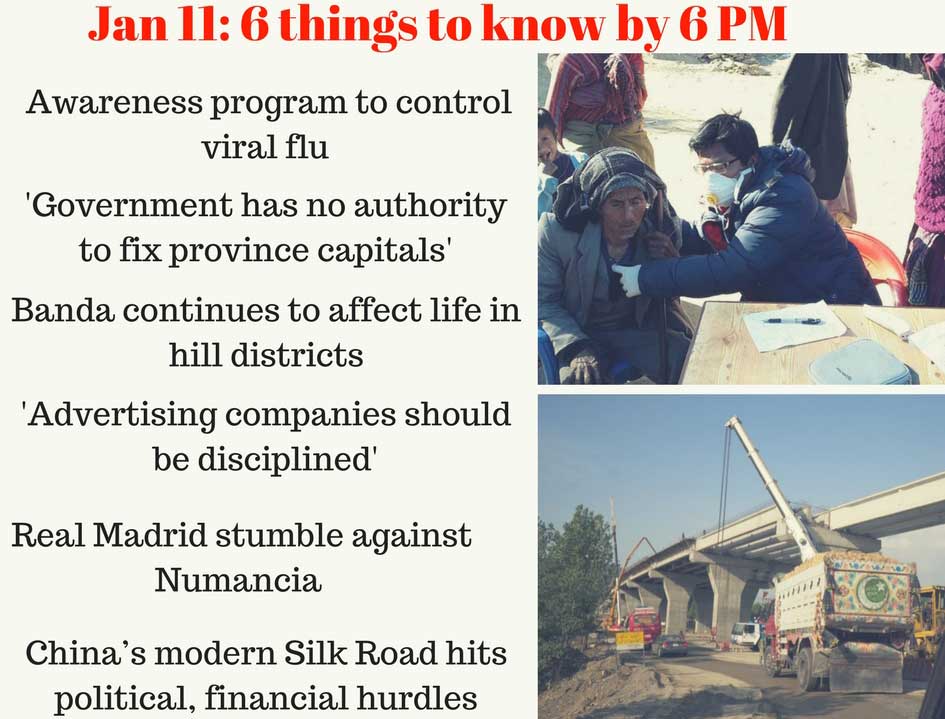 The health service camp and awareness program has exceeded to control the epidemic viral flu, spreading in the district since three weeks. District Health Office and Health assistants have exceeded awareness program along with health check-up program, where 12 people lost their lives.

Government has no authority to fix province capitals: Law Minister

Minister for Law, Justice and Parliamentary Affairs, Yagya Bahadur Thapa has said that the government does not have the right to determine the province capitals. He said this while inaugurating the Safal National Industrial Trade and Second Mobile Fair, organized by the Pokhara Chamber of Commerce and Industry and sponsored by Laxmi Group, at the Pokhara Exhibition Centre on Thursday.

The banda imposed by the locals demanding that Dhankuta district be declared the capital of Province-2 has entered the fourth week today, continuing to cripple life in the hill districts.

Advertising companies should be disciplined and competitive: Minister Basnet

Minister for Information and Communications, Mohan Bahadur Basnet, has said that advertising companies should be disciplined and competitive. Inaugurating the 18th annual general meeting of Advertising Agencies' Association of Nepal in the capital on Thursday, Minister Basnet said, "Advertising companies, that are benefiting the nation by providing employment to thousands of people, are themselves an industry.

Troubled Spanish champions Real Madrid stumbled to a 2-2 draw with third-tier Numancia on Wednesday but qualified for the King’s Cup quarter-finals 5-2 on aggregate. With a comfortable first-leg advantage, Zinedine Zidane rested much of his first team, making 10 changes from the line-up that struggled to a disappointing draw at Celta Vigo on Sunday to fall 16 points behind league leaders Barcelona.

China’s plan for a modern Silk Road of railways, ports and other facilities linking Asia with Europe hit a $14 billion pothole in Pakistan. Pakistan’s relations with Beijing are so close that officials call China their “Iron Brother.” Despite that, plans for the Diamer-Bhasha Dam were thrown into turmoil in November when the chairman of Pakistan’s water authority said Beijing wanted an ownership stake in the hydropower project. He rejected that as against Pakistani interests.