Jumla Airport closed for locals, not for minister 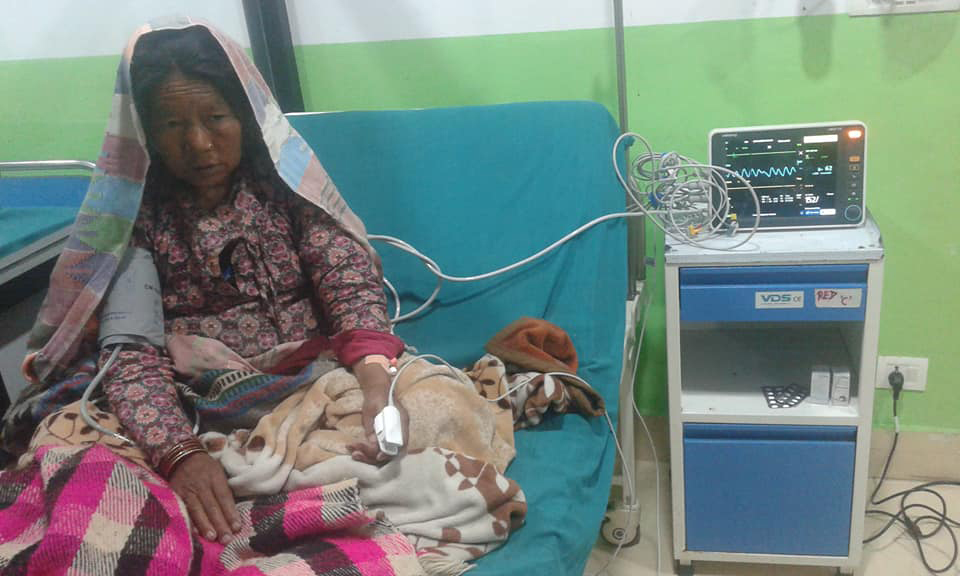 Jansari Gharti of Thabang who could not be airlifted on time as the Jumla airport was closed.

JUMLA, Nov 1: Janasari Gharti of Thabang had been undergoing treatment since two weeks at the Karnali Academy of Health Sciences (KAHS) in Jumla for lungs-related ailment. As her treatment was not possible at KAHS, the doctors referred her to a well-equipped hospital elsewhere.

She was rushed to Jumla Airport on October 24, a day before the airport was scheduled to shut down for maintenance. Despite reaching there on time in an ambulance with oxygen mask, she could not be airlifted. Gharti, who was struggling between life and death, was sent back to the hospital as she could not get a ticket.

This compelled her to suffer for two more days before an army helicopter rescued her. As the airport was closed, four other persons injured in a jeep accident in Hima Rural Municipality-1 were also deprived of timely treatment. It was only when a helicopter belonging to Nepal Army came two days later that the injured were airlifted to the capital for treatment along with Gharti.

Janasari's relative Premraj Giri of Guthichaur Rural Municipality-3 commented, "They are not ready to fly even if common people are struggling for survival but will take off immediately if it's to fly political leaders. What kind of culture is this?”

Although two seats are reserved for patients, hardly any patient gets to travel on those seats in private airplanes. Instead, those seats are used by the relatives and family members of airline companies.

"Despite requesting the staffers of various airlines companies, we were unable to get tickets," said Premraj, adding, "However, some patients with normal injuries were able to get tickets due to their high level connections."

The residents of Jumla could not hold back their anger when Minister for Culture, Tourism and Civil Aviation Rabindra Adhikari landed in the same airport which was closed for the locals. His arrival immediately triggered an outcry.

Kailash Sharma, chief of Jumla Airport, informed Republica that the airport has been closed for a month for maintenance.

"We had to open it for two days for the arrival of Civil Aviation Minister Adhikari," said Sharma, adding, "Adhikari will make a field visit of the airport and will give some suggestions on how the airport should be upgraded."

Chief District Officer (CDO) Bishnu Paudel stated that the visit of the minister would contribute for upgrading the airport. "A minister arriving in a closed airport is not a matter of loss. Infact, it can bring solution to various problems faced by the aviation sector of this place," said CDO Paudel.

Jumla schools without teachers even after holidays are over

JUMLA, Nov 13: Schools in Jumla had announced holiday only till Dashain. However, schools here have not opened even after Tihar.... Read More...

TAPLEJUNG, July 30: Passengers have been hit hard as Suketar Airport in Taplejung district remained closed for the past one... Read More...