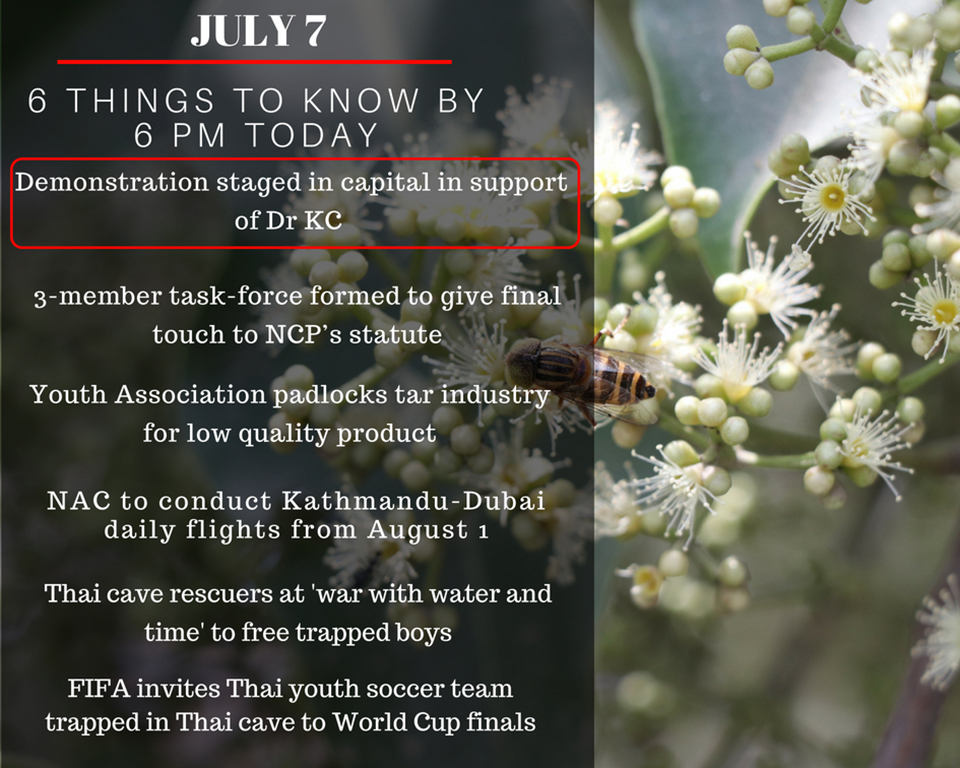 A demonstration has been held in the capital in support of Senior Surgeon Dr Govinda KC who is staging fast-unto-death demanding reforms in medical sector in Jumla since last eight days. The demonstration which began at Maitighar Mandala passed through Bijuli Bazaar and converged into a corner meeting at New Baneshwar. A secretariat meeting of the Nepal Communist Party (NCP) on Friday formed a task-force to give a final touch to the party’s statute. According to Party Spokesperson Narayankaji Shrestha, a meeting held in Baluwatar formed a three-member taskforce comprising Bamdev Gautam, Ram Bahadur Thapa and General Secretary Bishnu Paudel.

Youth Association Nepal Jhapa Chapter has padlocked the office of a tar industry located at Kankai Municipality of Jhapa district, reasoning that the tar produced there was of low quality. Shiva Construction Service of Kankai Municipality-1 was padlocked because the tar it produced was found nonstandard. "The road blacktopped with the use of this industry's tar wore out very quickly," said Chapter Chairman Shambhu Bhandari.

National flag-carrying Nepal Airlines Corporations (NAC) is all set to conduct Kathmandu-Dubai flight on a daily basis. The NAC which began its first flight on August 18, 2016 is conducting its daily flight from coming August 1.

A rescue mission for a young Thai soccer team and their coach trapped for two weeks in a flooded cave is at “war with water and time”, its leader said on Saturday but was eyeing its best chance yet to free the group before expected heavy rains. FIFA President Gianni Infantino has sent a letter to the head of the Football Association of Thailand with an official invitation to attend the 2018 FIFA World Cup Final Match in Moscow - if the boys are rescued in time. Gianni Infantino stressed that having the Wild Boar football team and their coach at the World Cup finals in Moscow on July 15 would "undoubtedly be a wonderful moment of communion and celebration."