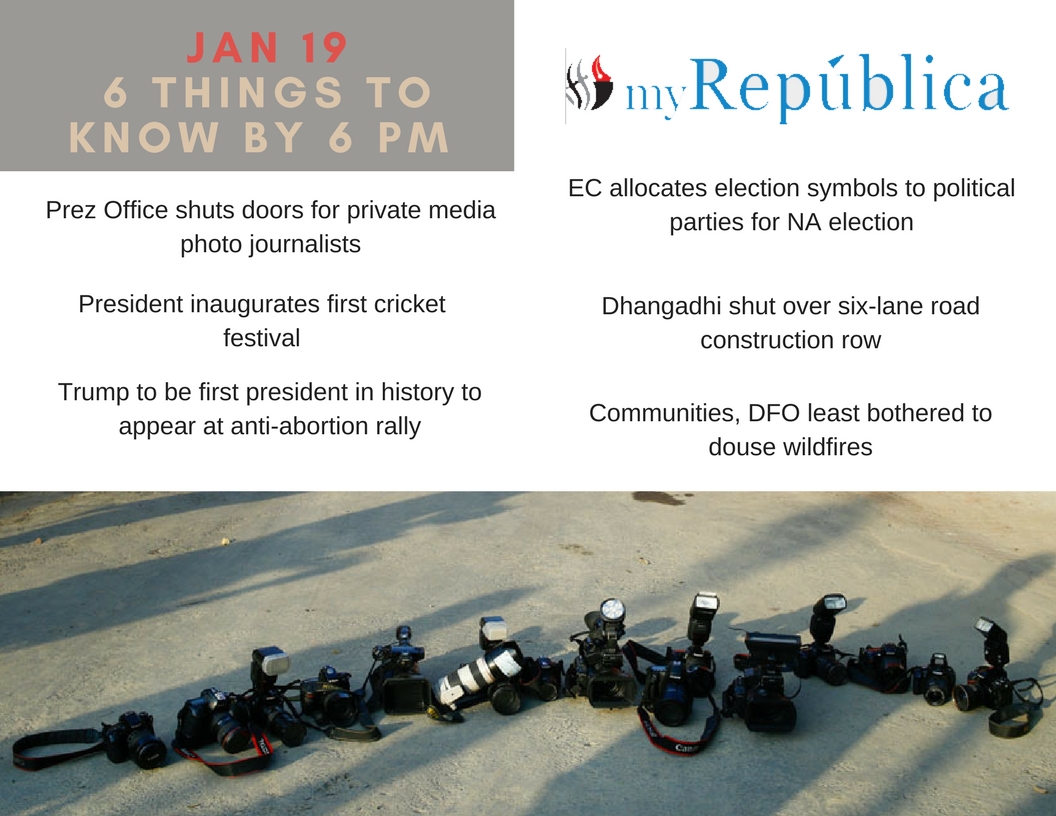 Photo journalists from private media outlets were barred to enter the Office of the President, Sheetal Niwas and capture the swearing in ceremony of provincial chiefs. President Bidya Devi Bhandari had administered oath of office and secrecy to seven newly-appointed province governors earlier today.

Dhangadhi has been shut today demanding that the under-construction six-lane road be retained. The road construction halted recently following a protest erupted in the course of pulling down structures on the road for the project.

For a week, more than a dozen community and national forests have caught wildfire at Chayanath Rara Municipality, Mugu. However, neither communities nor the District Forest Office (DFO), seem to care to douse the fires.

The landmark show of support for the pro-life cause will mark the first time in 45 years a president has appeared at the event. Trump will address crowds via video link from the White House Rose Garden. George W Bush addressed the rally via a phone call, and Ronald Reagan through a loudspeaker, but Trump’s video appearance is the strongest show of support yet for the movement.

President Bidya Devi Bhandari inaugurated the first cricket festival organised by the Madan Bhandari Sports Academy, Department of Cricket amidst a ceremony here today. The government has given special attention to the development and promotion of sports sector despite limited resources and infrastructure construction is going on in full swing in view of the upcoming South Asian Games (SAG) to be held in Nepal, Minister for Youth and Sports, Rajan Kumar KC, said

TU campuses to resume physical classes suspended after COVID-19 outbreak
22 hours ago
Arrest of NC leader Paudel is an indication of totalitarianism: President Deuba
14 hours ago

NC leader Paudel, others released after three hours in police control
12 hours ago

Home Ministry suspends two SPs, one inspector on charge of irregularities
19 hours ago