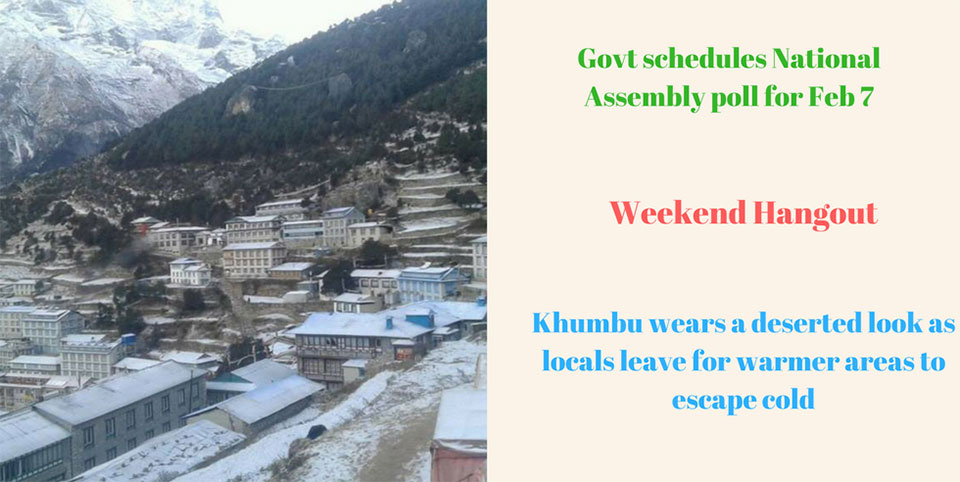 The government has scheduled the date of National Assembly election for February 7.

An emergency cabinet meeting held at the Prime Minister’s official residence in Baluwatar on Friday afternoon decided to this effect.

Every Friday and Saturday, we look into venues around the city to find a suitable place to hang around with our friends and loved ones.

Prime Minister Sher Bahadur Deuba has instructed the government ministers, secretaries and agencies concerned to speed up the development and the post-earthquake reconstruction works. Addressing the 41st meeting of the National Planning Commission (NPC), national development problems resolution committee, here today, he stressed that the development construction works which were stopped due to the elections should now be expedited along with the implementation of the federalism.

With the mercury dipping, locals from northern part of Solukhumbu district have left for low-lying areas including the capital city Kathmandu to escape biting cold. Solukhumbu airport, hotels, campsite, trails, bridges and viewpoints which used to be flooded with tourists during the tourist season, now are wearing a deserted look.

Pep Guardiola is now ready to sign Alexis Sanchez before the end of January as he wants more options in attack. Guardiola currently has just one fit first-team striker in Sergio Aguero as Gabriel Jesus has been ruled out for up to six weeks with a knee ligament injury.

CPN-UML chairperson KP Sharma Oli has said that the conspiracies are being planned to ruin the party unification between CPN-UML... Read More...