KATHMANDU, Dec 8: The government on Tuesday officially announced the new height of Sagarmatha to be 8,848.86 metres .

According to the official announcement jointly made by Nepal and China, the height of the world’s tallest peak has increased by 86 centimeters.

The new height of Sagarmatha has been measured at 8,848.86 meters, announced the Minister for Foreign Affairs, Pradeep Kumar Gyawali during a live press conference organized at the Department of Survey. 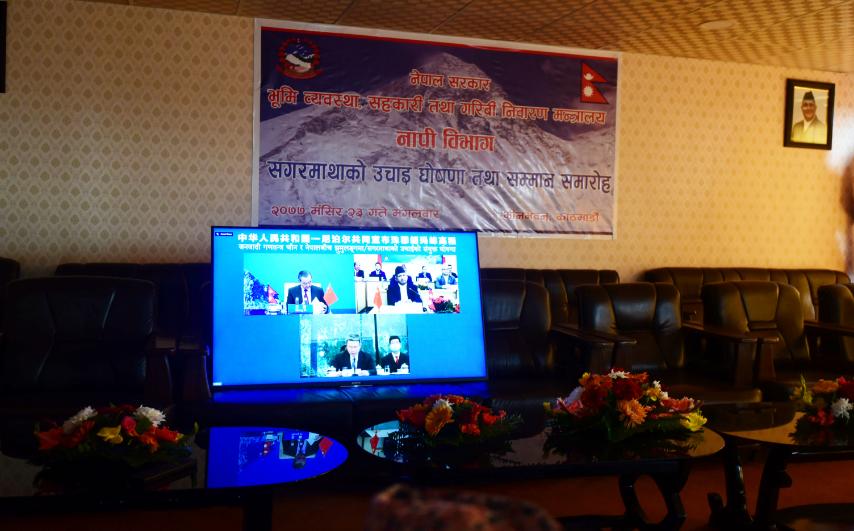 After the devastating 2015 earthquakes, there were speculations by geologists that the height of the tallest mountain in the world might have changed due to possible shifts in the tectonic plates.

This is the first time Nepal has measured the height of Mt Sagarmatha on its own. The Nepali team used Global Navigation Satellite System (GNSS), an advanced technology, to measure the height.

During the visit of Chinese President Xi Jinping to Nepal last year, both the countries had decided to jointly reveal the height of the world’s tallest mountain.

The Chinese side has measured the height of Mt Sagarmatha on its own from the northern side.

The newly-measured height of the tallest mountain of the world is being revealed jointly by Nepal and China. ... Read More...

Has Sagarmatha’s height increased? Nepal and China to reveal the newly-measured height today

This the first time the government has measured the height of Sagarmatha on its own ... Read More...

The joint announcement has strategic significance which can be understood against the backdrop of three geo-political-economic developments. ... Read More...