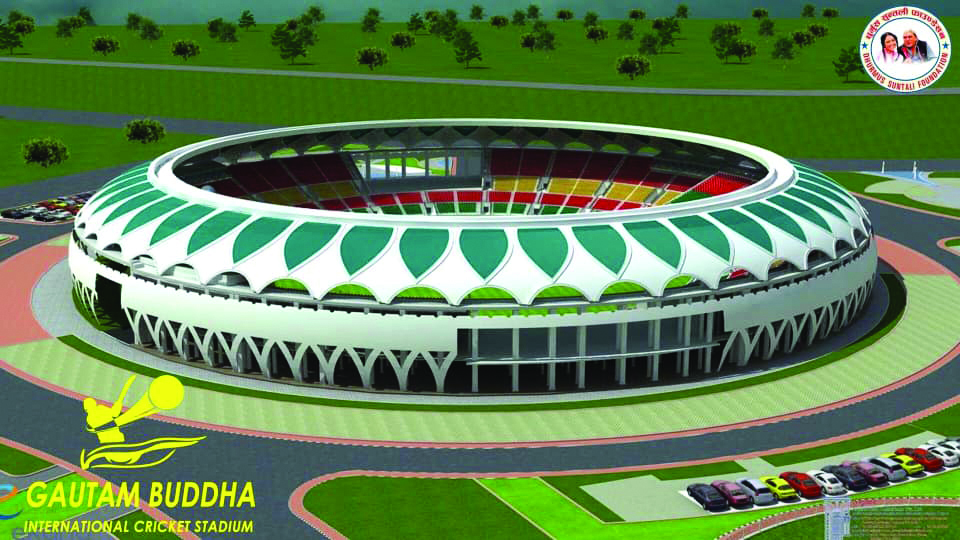 Kandel is a physics PhD fellow at Stanford University, and Sharma is a civil engineering Phd fellow at University of Alberta, Canada
news@myrepublica.com

A sports stadium is a public asset which will benefit the entire country. Therefore, the government, not private entities like Dhurmus Suntali Foundation, should build it

Dhurmus Suntali Foundation recently announced that they will build an international cricket stadium with a capacity of over 30000 in Chitwan. This announcement comes at an opportune time since Nepal has recently been granted international T20 status and has won its first series against the United Arab Emirates.

Nepali cricket team has been performing exceptionally well in recent years. However, the team has many needs that must be addressed to further this sport.  At the moment, the imperative need is an international cricket stadium. Therefore, the initiative taken by Dhurmus Suntali Foundation is appropriate. As much as we get excited by this news, some fundamental governance, developmental policy, economic and ethical questions arise with this announcement. In this article, we will address some of these issues.

Comparing post-earthquake actions of Dhurmus Suntali foundation with that of our government, it shows some blatant ineffectiveness of our government.  As a part of post-earthquake relief, this foundation has completed the establishment of several model settlements, through the construction of several homes at Kavrepalanchowk and Sindhupalchowk. At the same time, Nepal government’s recovery effort has been a major failure, as its progress has been so slow that over two-thirds of the earthquake-affected people still live in temporary shelters, and many of the earthquake-damaged monuments are yet to be reconstructed. There were several notable policy failures here, but the main takeaway is that these failures are not because of lack of funds, but rather because of the inability to spend it.  If the government had been swift in its actions, it would have impacted far more people than a small subset of people the Dhurmus Suntali could.

Looking at the efficacy of the Dhurmus Suntali foundation during the post-earthquake period, it might seem reasonable to support their plan to build a cricket stadium.  This leads us to one of the main points of this article: Post-earthquake action of Dhurmus Suntali benefitted private people or a small subset of communities. However, a sports stadium is a public asset which will benefit the entire country, and the government, not some private foundation, should invest in public infrastructure.

Given the popularity of cricket in Nepal, the major question that this government needs to answer is why it cannot invest in the stadium. One potential answer could be high infrastructure costs, but when our government is inept at spending even 20 percent of the fiscal budget, money is not a limitation for important infrastructure developments. A quick estimate sheds more light on the economic concern. In India, the cricket media rights contract was sold for approximately Rs 10000 crores for five years. Given that India has 47 times more people, and three times greater per capita income than Nepal, a reasonable estimate of the economic value of cricket media rights here in Nepal would be around 80 crores. Since the stadium will have a capacity of over 30000 people, just with around 50 games a year, the stadium will generate net revenue of 250 crores in five years through tickets and stadium advertisements. Therefore, all direct and indirect economic benefits mean that this stadium will pay for itself within 10 years.

The cost-benefit analysis here is clear, although such calculations are not always straightforward for all public goods. In general, public goods present societies with benefits that manifest eventually, but private investors often disregard these benefits and therefore governmental investment in them is crucial to fulfilling the social demand. There are two main characteristics of public goods that make private investment in them non-profitable and hence governmental investment in these goods essential. The first is that individuals cannot be barred from using these goods, also called non-excludable, and the second is that usage of these goods by one individual does not reduce its availability to others, also called non-rivalrous. Proper roads, free education, and free health care are examples of public goods. In economics, these goods have a positive externality, and in the absence of governmental intervention always under-produced. The fundamental reason construction of public goods through entities like the Dhurmus Foundation is not sustainable is the non-excludable nature of public goods, which leads to a free-rider problem, where there is no incentive for an individual to invest in something because they will be able to use it. In such a case, the best option is government investment through public taxation.

Why should the government invest in public goods? Because these free goods will eventually have positive social and economic impacts. For example, quality free education benefits not only individuals but also the overall society. This is true for several reasons. First, educated people are more democratic and productive. Education also promotes social and political harmony and increases class mobility, giving people a wider opportunity to improve their standard of living. Since educated people have a higher living standard, they are more likely to adopt healthy lifestyles, leading to less strain on public healthcare systems. They also pay higher taxes, providing further benefits to the overall society. Similarly, an international stadium would positively impact the economy of Chitwan and to some extent the country. Another positive impact of the stadium would be the pleasure, or utility, that people would derive just by watching national and international tournaments played here in Nepal.

In the past, including during post-earthquake reconstruction, Nepal was drafting the constitution. There was a lack of stable government, local governing bodies, and a stable framework for government expenditures. Several defects led to the government’s incompetence in budget spending. However, we have now drafted a constitution and elected a stable government. Building a cricket stadium through government spending, instead of petty donations, is a golden opportunity for this government to show that our developmental policies are getting on track. We need a cricket stadium, but we shouldn’t be asking a foundation to do it for us. It is the government’s responsibility to make sure that its citizens have access to proper health, education, security, recreation, and other necessary facilities, and it would be an utter embarrassment for a government to ask a foundation to offer such facilities to us. At present, when the government has nationally popularized its slogan “Prosperous Nepal, Happy Nepalis”, it should also make people feel its concrete actions towards fulfilling this goal.

Kandel is a physics PhD fellow at Stanford University, and Sharma is a civil engineering Phd fellow at University of Alberta, Canada

Unmanaged waste has adverse impact on public health and economy. The government should manage it properly ... Read More...

Nepali among those killed in Baltimore shooting
16 hours ago