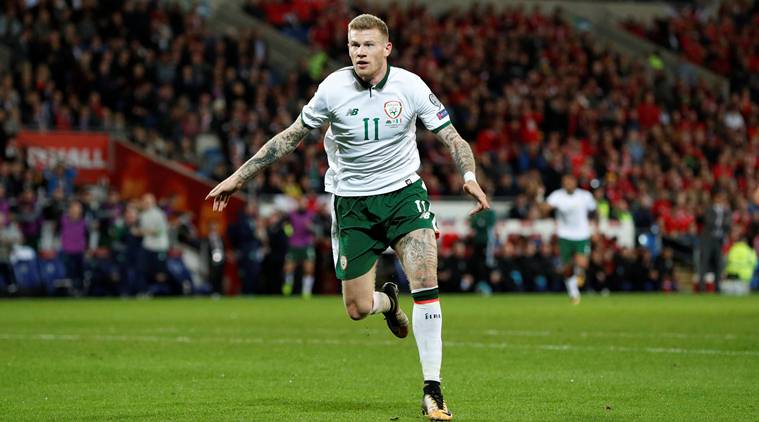 CARDIFF, Oct 10: Ireland ripped up the script by beating Wales 1-0 to secure their place in the playoffs for the World Cup finals on Monday.

A night of raw emotion began with both sides needing three points to secure the second spot in Group D behind Serbia and ended with Ireland’s visiting fans in delirium thanks to James McClean’s goal.

Martin O‘Neill’s Ireland soaked up the expected Welsh pressure in the Cardiff City Stadium and landed a sucker-punch in the 57th-minute with one of their rare attacks.

It proved a body blow from which Chris Coleman’s Wales, who started the night above Ireland in second place and still had eyes on top spot, never recovered as their hopes of reaching a first World Cup finals since 1958 evaporated.

Real Madrid forward and Welsh talisman Gareth Bale, missing the crunch clash through injury, could only watch on helplessly in his seat in the stands as Wales suffered their first defeat in 12 World Cup qualifiers.

Ireland finished the group as runners-up with 19 points, two ahead of Wales who paid the price for too many draws earlier in the campaign. Serbia beat Georgia 1-0 to win the group and qualify for the Russia finals automatically.

Coleman to take time reflecting on future after Wales loss

“So proud. The players were magnificent playing away from home at a very good Welsh side. To win on their territory was a great result for us,” O‘Neill said.

“That last half-hour seemed an eternity. We withstood pressure but we knew at some stage we would have to try to win the game and we did. The goal was worthy of winning any game.”

Wales dominated before halftime without ever really opening up a well-organized Ireland side and Ireland keeper Darren Randolph was rarely tested.

The hosts began the second half with a flourish and James Chester glanced a header into the side-netting.

Randolph then made a superb save to tip Hal Robson-Kanu’s powerful header over the crossbar in the 54th minute.

Wales keeper Wayne Hennessey’s poor throw-out put Ashley Williams under pressure and the Everton defender was robbed of the ball by Jeff Kendrick on the right touchline.

Kendrick sprinted forward and crossed low, the ball being expertly dummied by Harry Arter before eventually reaching the unmarked McClean, who finished first time with an unstoppable right-foot drive.

With news of Croatia leading against Ukraine filtering through, it meant even a draw would not be sufficient for Wales to claim one of the eight playoff spots.

Ireland defended superbly for the remainder of the game although Wales were flat. A Welsh goal would have ended Ireland’s playoff hopes and their hearts were in their mouths in stoppage time when Aaron Ramsey fired straight at Randolph.

Ireland have not qualified for the World Cup since 2002 and have bitter playoff memories, having been knocked out by a controversial France goal in 2010.

They will learn who they must face over two legs when the draw is made on Oct. 17.

A resurgent Saudi Arabia could take a major step towards ending their decade-long exile from the World Cup finals if... Read More...