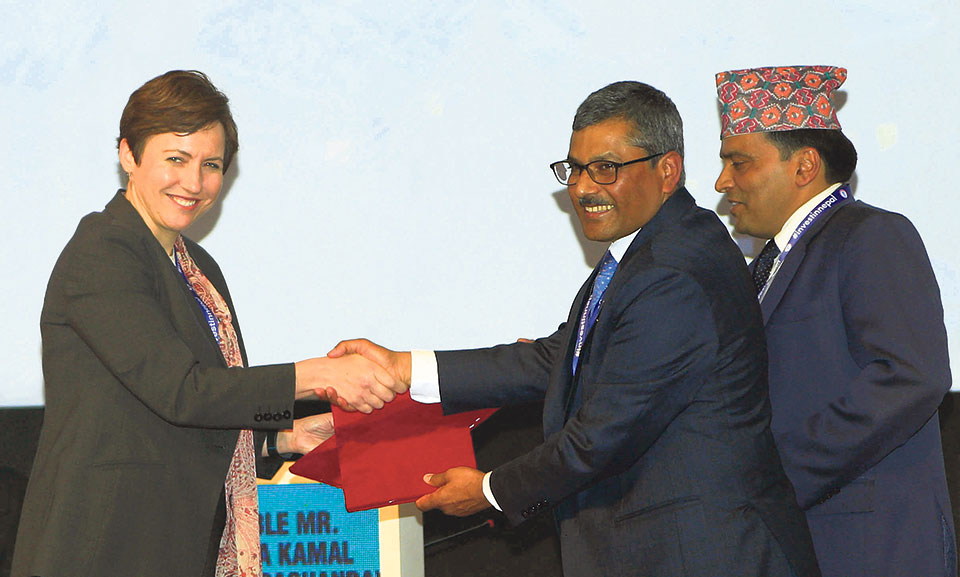 KATHMANDU, March 31: The two-day ‘Investment Summit 2019’ concluded on Saturday with the signing of 15 memorandums of understanding (MoUs) with and among various investors, in addition to investment commitments to 17 various projects.

A total of 735 delegates from 40 countries representing 300 companies, in addition to 600 domestic participants from over 100 companies, took part in the summit, according to IBN.

Some  notable deals signed at the end of the summit include a joint venture agreement between CG Corp Global and SkyPower Global for developing a 600-megawatt solar power in Nepal, an MoU between CG Corp Global and Sharaf Group headquartered in Dubai for the development of a multi-model logistics park in Nepal, and a deal between CG Infrastructure Pvt Ltd and the chief minister’s office of  Province 2 for the development of a solar photo-voltaic energy project.

Also notable were the announcement of financial investment confirmation of $650 million for the 216-MW Upper Trishuli Hydropower Company by a Korean company and an agreement between the International Finance Corporation, IBN and the Special Economic Zone (SEZ) Authority of Nepal for the development of Shimra SEZ on a public-private partnership model.

Another commitment letter signed at the end of the summit between SJVN Arun-III Power Development Company (SAPDC), the State Bank of India and three Nepali commercial banks for the financing of the 900-MW Arun-III hydropower project will  pave the way for  financial closure for the development of the mega project . The Indian SBI Bank has made a commitment to provide Rs 65.6 billion while Everest Bank Ltd (Rs 8.13 billion) and Nabil Bank Ltd (Rs 4.88 billion) will also contribute to the project  estimated to cost  Rs 112.28 billion.

Regarding commitments for  investment in various projects  pitched by the government, IBN CEO Maha Prasad Adhikari said  they have received applications for seven projects in transport infrastructure, four in energy sector, three in agriculture infrastructure, two in education and health and one in logistics (bulk terminal). The government had pitched 77 projects worth nearly $32 billion during the summit.

But it was not immediately clear which  projects have drawn applications from investors.

The two-day summit also featured a number of sideline events on themes of business climate, future of venture capital in Nepal, and women entrepreneurship, along with 36 bilateral meetings with the prime minister and other ministers, over 39 business to government meetings and over 30 business to business meetings, according to  IBN.

Amid concerns over the post-summit efforts of the government to translate those MoUs and investment commitments into reality, IBN CEO Adhikari said  the government will set up a robust follow-up mechanism to take the signed deals into implementation.

KATHMANDU, Oct 24: Prime Minister Pushpa Kamal Dahal, who is also the chairman of the Advisory Council of the National Reconstruction... Read More...