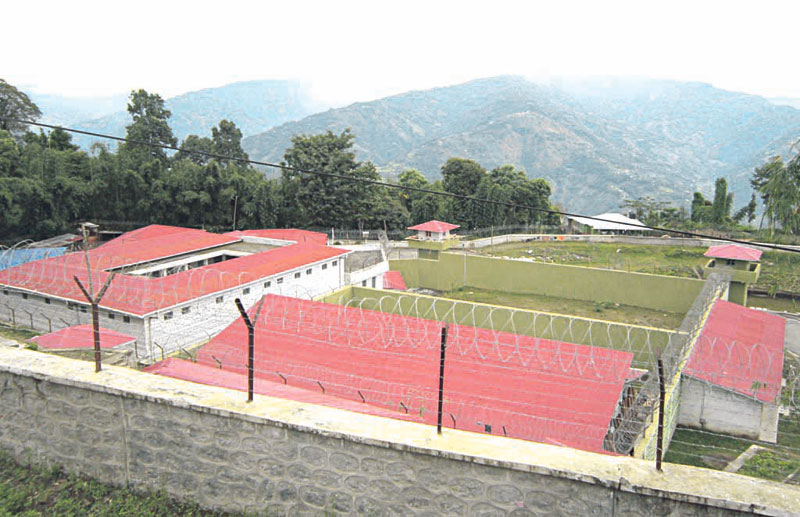 ILAM, June 7: Thirteen inmates in Jhapa district prison recently fell unconscious due to scorching heat. They regained consciousness only after prison staffs and other inmate sprinkled water and fanned them with paper. These are common problem for the prison’s staff and its inmates during hot days.

Condition of Taplegunj district prison is not any better. Its inmates also fall sick during from heat during summer and from cold during winter. In lack of proper medical service, the sick are forced to suffer further. According to the prison administration, the budget that comes for inmates’ health care is not sufficient to cover the cost.

These are representative cases of the problems faced by prison inmates in various prisons of the Mechi zone. Squeezing way higher number of prisoners than the capacity of the prisons is a very serious and old problem across the country. On top of that, the prisons are already too fragile to hold the pressure of the people’s weight and movement anymore. The infrastructures which pose danger of falling apart anytime has however hardly received due attention from the government. Even after the devastating earthquake of 25 April and aftershocks that followed no action has been taken towards mitigating the risk.   It’s not only inmates whose lives are in perils, but prison administrators also feel the same. Still there’s least they can do about it.

Apart from these threats, due to densely congested prison cells, inmates are always in risk of communicating communicable diseases. “We have been deprived of basic facilities that are we are entitled to. We don’t have enough space for sleeping, to move around, not event to breathe. There is acute shortage of toilets, drinking water and other basic facility in this prison,” inmates complain. They lament that they are bound to suffer from poor health due to the lack of minimum facility.

According to the prison officers in Pachhtar, the prison has five times more inmates than its capacity. While the prison is built to accommodate 25 inmates, it has been presently accommodating 124 inmates. Of these 109 are males and rest are female.

The prison shares rooms for female inmates from Taplegunj as the latter does not separate rooms for them. According to the staffs, there are 12 women, two children and one infant in the prison. “This prison was constructed in 1974. It is old, fragile and is need of repairs. After the earthquake last year, it has been further weakened,” said Khagendra Bardewa, branch officer at the prison. “The infrastructure is in serious need for renovation and repairs. I don’t think it will sustain even incessant rainfall, let alone another earthquake,” he added. The prison rooms are made of just mud and stones with its outer walls plastered with cement.

The prison receives around Rs 80,000 annually for providing medical care to its inmates. But, Bardewa informed, this amount does not cover the cost of the treatment. “If any of the inmates gets severe health problems, it gets even difficult to manage funds for treatment.”

The prison has communicated its present status and the need for renovating and increasing its capacity with concerned authorities. Still, he informed, there has been no progress made towards addressing the issue.

“The prison has around 10 ropanis of land and this would be sufficient to build a better prison with a good capacity. But our efforts to construct new prison building have gone in vain as the department continues to turn deaf to our concerns,” Bardewa said adding that there is no ray of hope that the department would address their demands next year also.
Similarly Jhapa prison is also overcrowded. It has 495 inmates including 80 women. Due to poor hygiene and ventilation in the prison cells, most of them remain ill through the year. There is hardly any day around the year they get sound sleep. When it rains or when the temperatures dip or rise, inmates start showing one or another health problem.

According to the prison chief Yagyanath Niraula, it’s common for the inmates to get sick during intense weather. “Due to the lack of facilities, many fall sick. Due to lack of resources, we have not been able to provide essential facilities to the inmates,” he said. He also said that the funds provided to the prison for providing health facilities to the inmates is never sufficient. “We get Rs 600,000 annually for providing health services. But as one or other inmates is always ill, the funds do not cover even half the cost of their treatment.”

He too expressed worries over the fragile condition of the prison building. Despite continuous efforts for constructing new buildings and repairing old ones, Niraula said that the prison has not received attention from concerned authorities. “The prison needs land and buildings for housing its inmates in a safe and secure environment. The prison is presently built on a private property and the prison complex is in a dilapidated state. It is high time that the concerned authorities take action to address these grave concerns,” he said.

65 inmates at the central jail and 93 security personnel across the nation have contracted the virus sop far ... Read More...

RAJBIRAJ, Dec 28: The Saptari District Prison here is accommodating thrice the number of inmates than its normal capacity. ... Read More...

ILLAM, May 2: The indifference of Nepal Electricity Authority (NEA) toward proper maintenance of electricity poles and wires has put people... Read More...