Infographics: Which countries have been to the Moon? 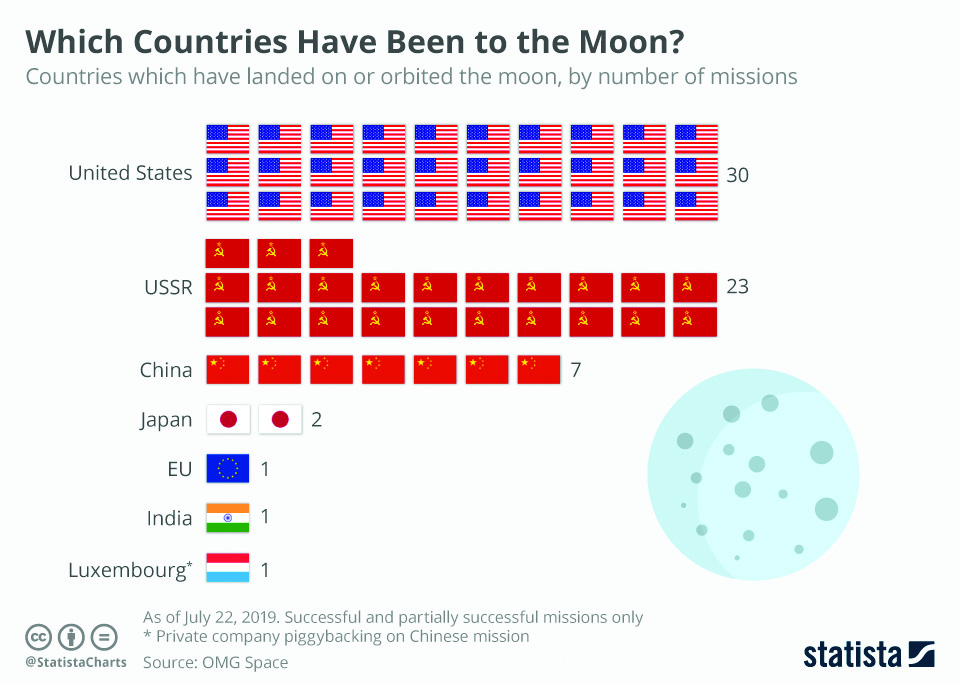 Only seven nations (or political unions) have been to or orbited the moon so far as part of a successful or semi-successful mission – and the runner-up doesn’t even exist anymore. This is the tally of moon missions long after the first race for space that saw the U.S. and the USSR square off in the 1950s, 60s and 70s and at the recent beginning of the new era of moon missions that included the participation of new national actors.

The U.S. tops the current list, with 30 completed successful missions to the moon or its orbit between 1959 and 2013, according to OMG Space. The USSR flew 23 such missions between 1959 and 1976. China stepped up its space program in the 2000s and flew its first mission of the Chang’e program in 2007. All six attempted missions related to the program have been successful or semi-successful (Rover Yutu that landed on the moon in the Chang’e 3 mission in December 2018 stopped moving after around six weeks but maintained radio contact). China counts seven missions to the moon after a Hong Kong satellite, AsiaSat 3, in 1997 missed its Earth orbit, which was subsequently adjusted with the help of two lunar fly-bys, marking the first (accidental) commercial mission to the moon.

Infographics: Where concern is highest about fake news on the internet

Amid a backdrop of rising populism and economic and social instability, the 2019 edition of the Reuters Institute Digital News... Read More...

Infographics: The best countries in the world