Infographics: The 2020 election is shaping up to be an expensive run 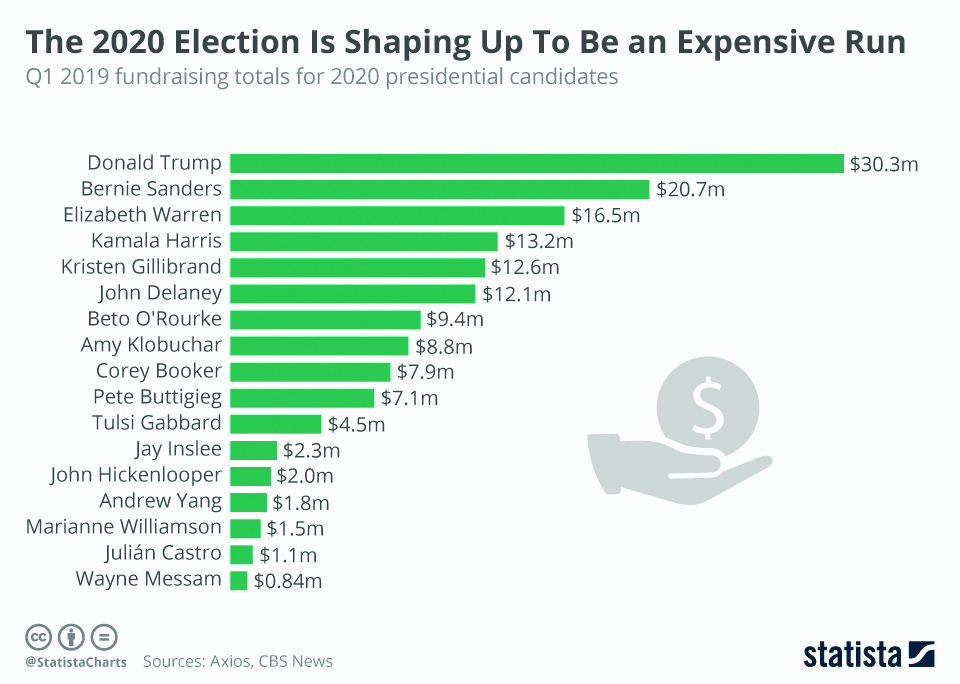 With a crowded field of 17 presidential candidates, candidates raised big numbers for the first quarter of 2019. Incumbent president Donald Trump declared $30.3 million in his fundraising arsenal in this quarter alone. By comparison, Bernie Sanders was able to score over $20 million receipts, while Elizabeth Warren hit close to $16.5 million right out of the gates in 2019. On the other end of the spectrum Wayne Messam, mayor of a mid-sized city in Florida, only raised around $84,000 dollars.

Julián Castro, Obama’s former secretary of Housing, raised just over a million dollars, while Marianne Williamson, Opera’s spiritual advisor, put up $1.5 million. These early numbers are telling signs for a candidate’s ability to drum up support, fund operating costs, and earn some name recognition, especially in a crowded field. Operational costs include employing staffers and renting campaign space, both essential ingredients to a smooth-running, gaffe-less campaign.  While media-buys are the other way campaign dollars are spent. Primary campaigns spend money on ads for television, radio, and newspapers. While social media has disrupted the stronghold advertisers had on campaigns by providing platforms where candidates can directly interact with voters, primaries are about name recognition, especially in a crowded field. Most voters still first learn about a candidate on television. While social media can earn media mentions on television, much like President Trump did in his 2016 run, advertisements are still important for distinguishing a candidate from a field of 17.

Infographics: Where women are leading the way in European Elections