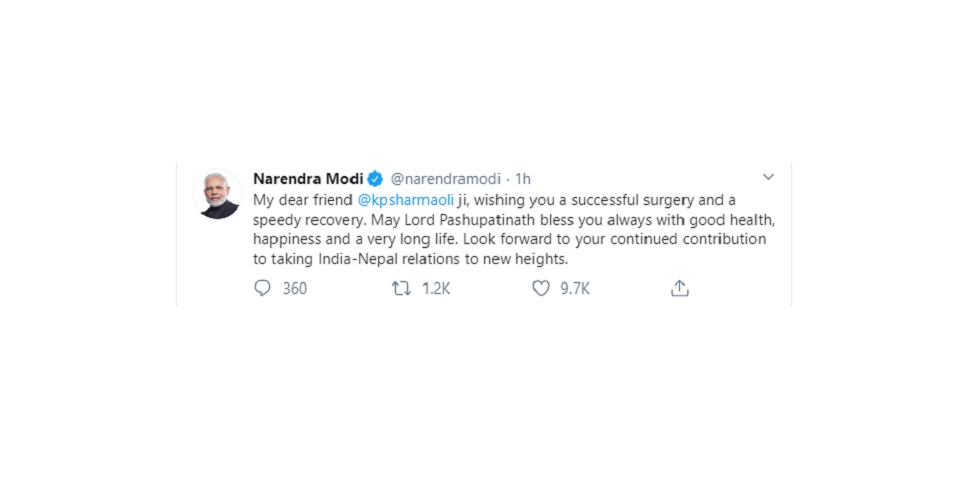 "My dear friend @kpsharmaoli ji, wishing you a successful surgery and a speedy recovery. May Lord Pashupatinath bless you always with good health, happiness and a very long life. Look forward to your continued contribution to taking India-Nepal relations to new heights."

Responding to Modi's tweet, PM Oli thanked him for wishing him. Oli wrote, "Thank you, dear Prime Minister, Modiji @PMOIndia for wishing me successful surgery and speedy recovery. It was thoughtful of you to express such warm words, reflecting our close friendship."

Prime Minister KP Sharma Oli is preparing to transplant his kidney for a second time at TU Teaching Hospital on Wednesday, according to Surya Thapa, the press advisor to Oli.

"All the preparations have been made for the kidney transplant," Thapa said. The prime minister will be admitted to TU Teaching Hospital on Monday.

Oli, who is also the chairperson of the ruling Nepal Communist Party, briefed the party leaders about his plan to transplant kidney during the party secretariat meeting on Sunday. Party spokesperson Narayan Kaji Shrestha said that the prime minister would undergo kidney transplant on Wednesday.

Two weeks ago, the prime minister had told a group of editors that he had been planning a second kidney transplant as it is a better option than undergoing regular dialysis.

Oli, 67, had undergone kidney transplant in India in 2007 after both his kidneys failed to function. He has been visiting hospitals abroad for health check-up ever since.