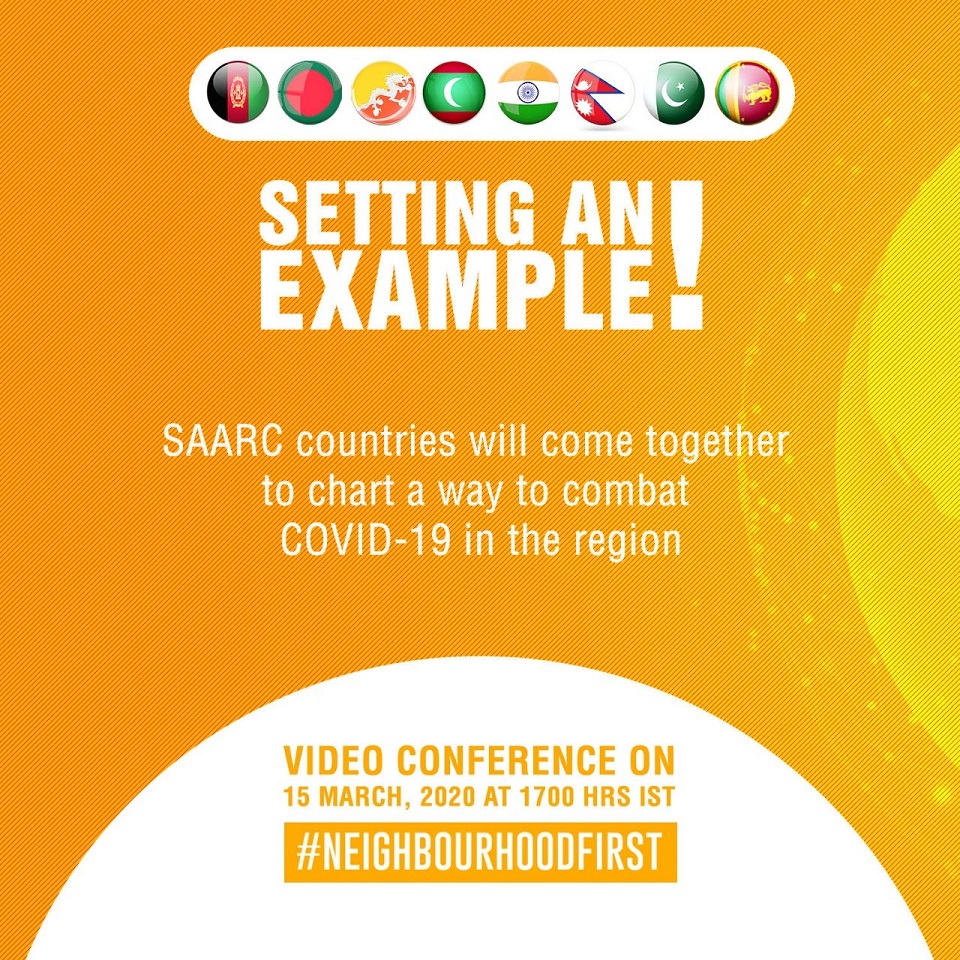 KATHMANDU, March 14: Indian PM Narendra Modi will be leading a video conference of all SAARC member countries Sunday (tomorrow) to chalk out a strong common strategy to fight COVID-19 in South Asia, the spokesman at the Indian Ministry of External Affairs announced today.

In a tweet on Saturday evening, the spokesperson of Ministry of External Affairs, India Raveesh Kumar informed that the video conference will kick off at 5 pm IST.

Earlier on Friday, PM Modi tweeted, "I would like to propose that the leadership of SAARC nations chalk out a strong strategy to fight Coronavirus." he also proposed to hold a discussion, via video conferencing among the SAARC leaders to keep the South Asians healthy.

"Together, we can set an example to the world, and contribute to a healthier planet." Hours after Modi's call for a common strategy against COVID-19, leaders of Nepal, Sri Lanka, the Maldives and Bhutan welcomed Indian Prime Minister Narendra Modi's proposal via Twitter.

PM KP Sharma Oli welcomed the idea put forth by Indian PM Modi. Tweeting shortly after Modi, he wrote, “I welcome the idea advanced by Prime Minister Modiji for chalking out a strong strategy by the leadership of the SAARC nations to fight Coronavirus. My government is ready to work closely with SAARC Member States to protect our citizens from this deadly disease”.

Pakistan also said that it is ready to join Indian Prime Minister Narendra Modi's idea to hold a video conference among SAARC countries in the ongoing battle against coronavirus.

However, the country said that it will not take part at a leadership level during the video conference. According to a spokesperson at the Ministry of Foreign Affairs of Pakistan, PM Imran Khan has decided to depute his special advisor on health to do the job.

As the current chair of the SAARC, Nepal has been consistently asking India, Pakistan and other member states to revitalize the SAARC process on several occasions. However, the SAARC process has remained stalled as India has been taking much harder approach towards it.

Amid India-Pakistan rivalry over a host of issues, New Delhi has shifted its focus from the SAARC to another regional organization Bay of Bengal Initiative for Multi-Sectoral Technical and Economic Cooperation (BIMSTEC).