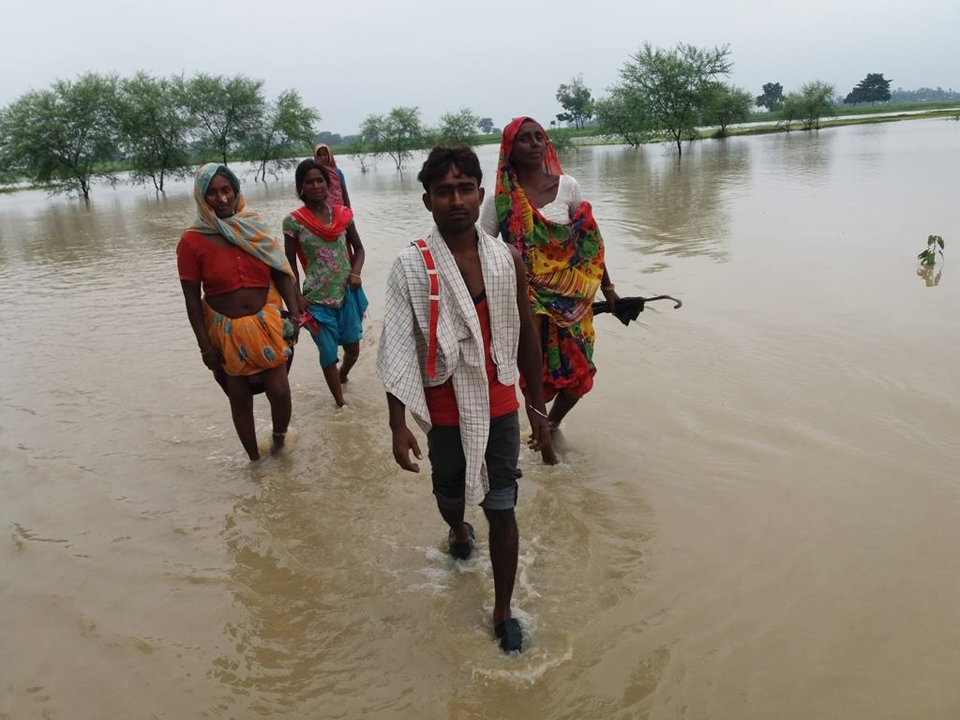 NEPALGUNJ, Aug 12: As early as 17 years ago, floods in the Rapti and Daduwa rivers would inundate huge parts in both India and Nepal in the rainy season. In fact, India would be more affected by the monsoon floods. In, 2000, India constructed a marginal embankment at Kalkalwa which changed the whole scenario. The embankment secured India but many parts of Nepal became prone to floods.

These two infrastructures - Laxmanpur Barrage and Kalkalawa embankment - constructed by the Indian government are making the locals living near the Rapti River on the Nepali side of the border cry oceans of tears almost every year. Whenever there is an overflow of water in the river, India shuts down the doors of the Laxmanpur barrage, inundating villages on the Nepali side of the border.

This is the reason behind the massive flood on Friday too. Krishna Bahadur Khadka, officiating Chief District Officer of Banke said, “I made numerous attempts to open the doors of the barrage but failed. Later, I urged the home ministry to take necessary action.”

While Nepalis were already facing floods almost every monsoon due to these two infrastructures built by India, the Indian side built a road similar to an embankment which has added to their woes. Experts say that the aim behind constructing the Indo-Nepal Parallel Border Security Road was to tighten internal security. Gokarna Mishra, chairperson of Daduwa Rural Municipality-6 claims that this road section has further increased the risk of flood in Nepal.

Nepal neither could stop India from constructing those infrastructures by breaching international laws nor could it succeed in implementing the agreements signed with India. In 2003, during his visit to India, the then Prime Minister Girija Prasad Koirala had made an agreement with India to open the doors of Kalkalawa embankment and also urged the Indian government to build a concrete embankment on both sides of Rapti to protect people from flood. He had even made an agreement for compensation to flood victims. However, Nepal government failed to implement both the agreements.

Though India agreed to minimize the impact of Laxmanpur and Kalkalawa embankments in the past, nothing has happened because of indifference from the Nepali side. A meeting of Nepal-India Joint Committee on Inundation and Flood Management had inspected the affected areas. At that time, the Indian side had agreed to construct a 28-kilometer long permanent embankment. It was estimated that the construction may cost Rs 4 billion. But Nepal didn’t push India to begin the construction process.

According to Bhelananda Yadav, chief of District Water Induced Disaster Prevention Office, a detailed project report for constructing a five-kilometer long embankment was forwarded to the higher authorities. However, there has been no progress on it.

Locals of Holiya, Betehani, Bankatti, Fattepur and Gangapur have been facing the problem of inundation every monsoon after India constructed the Kalkalawa marginal embankment.

According to flood victims’ struggle committee, 2,400 bighas of land has been destroyed so far and as many as 25,000 people have been directly or indirectly affected. Singh said around 4,000 bighas of land became uncultivable after the 2014 floods. “India constructed embankments breaching international law. This has had devastating effects on the Nepali side of the border. Unfortunately, our government has remained silent over the issue, which is unfortunate,” said Singh.

Indian embankment threatens lives on Nepali side of border

TILATHI, July 3: Sudden floods in the Khando and other rivers on Saturday inundated over a dozen villages in the northern... Read More...