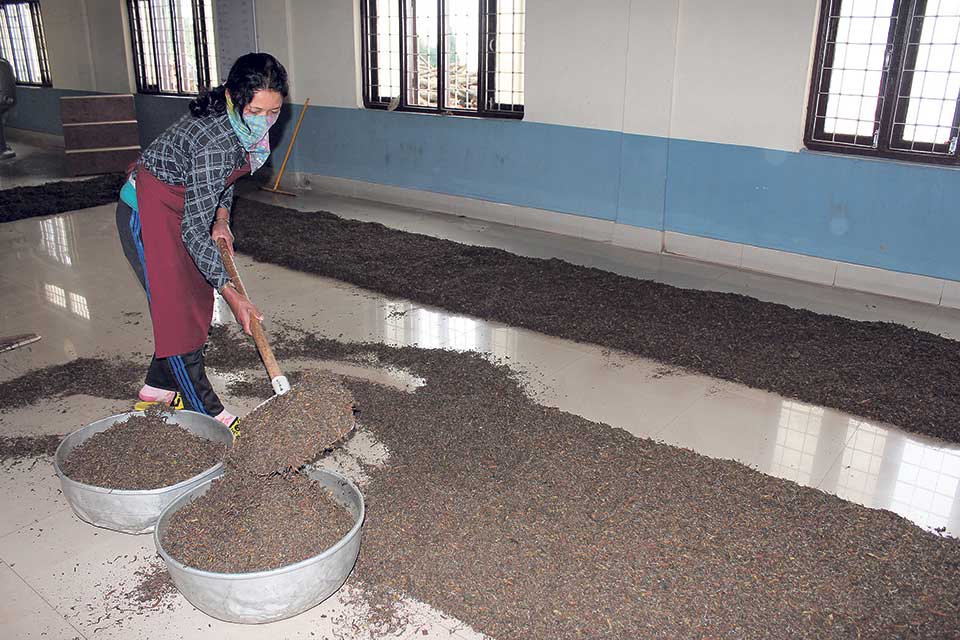 A worker arranges processed tea for packaging at Gorkha Tea State of Suryodaya Municipality of Ilam in this recent photo. Photo: Bhim Chapagain/Republica

ILAM, Jan 14: After a series of obstruction on the export of cardamom and ginger, Indian customs office at Panitanki is now obstructing the export of Nepal’s organic tea.

Traders have been complaining about hurdles created by officials of Indian customs on the export of organic tea, grown in the farms of Panchthar and Ilam districts and en route to the European and American markets via India.

According to the traders, Indian customs officials have been troubling them asking for guarantee from Indian banks and insurance from Indian companies.

Udaya Chapagain, a tea trader and vice president of Himalayan Orthodox Tea Producers’ Association (HOTPA), has said that the Indian customs office has been blocking the export, breaching the transit treaty between Nepal and India.

“We have been fulfilling all the procedures, including the insurance of tea, while exporting our organic tea,” said Chapagain. “But, the officials at Panitanki have been interrogating us about the export saying that it is not certain if we are really transporting them to Germany and America.”

Traders have been furnishing official documents regarding production, insurance, delivery details including the place of delivery, and quantity of organic tea being exported.

“We have been showing them all the required documents, but the Indian officials have been unnecessarily posing obstacles just for the sake of troubling our business,” said Chapagain. “We are compelled to export our tea from checkpoints other than the nearest checkpoint of Panitanki.”

Export via other checkpoints like Biratnagar-Jogbani has been smooth after showing necessary documents, according to the traders.  Tea estates of Darjeeling are near the Panitanki checkpoint. Traders have also said that Indian officials have been obstructing the export since the tea of Darjeeling is also exported via the same route, and Nepali tea has been challenging Darjeeling tea in terms of quality.

“The checkpoint might be troubling us since our organic tea under different labels are gaining market in Europe and America, and giving a competition to the organic tea of the nearby Darjeeling,” said a trader who did not wish to be named. “Indian authorities had been troubling Nepali traders on export of other agricultural products as well. Now they have started troubling the tea exporters.”

Germany is the main market for the organic tea produced at tea processing industries of Ilam, Panchthar, and Dhankuta. The demand for Nepali organic tea has been increasing in the US, Austria, New Zealand, Russia, and France.  Nepali traders have said that Nepali tea is better than Indian tea since tea bushes in Nepal are young.

“Tea from young bushes is of higher quality than the tea of older bushes,” said tea specialist Chandra Bhusan Subba. “Nepal’s bushes are younger than those of Darjeeling. Nepal’s better quality tea is replacing Darjeeling’s tea in international market.”

Traders have been demanding for solution of the problem saying that India is conspiring to obstruct the export of popular Nepali tea in the international market.

Nepali organic tea used to be exported to the third countries with the label of ‘Darjeeling Tea’ since Nepali tea did not have its own trademark in the past. But, Nepali tea traders have been exporting tea to the other countries on their own for half a decade and have gained a wider market than before.

ILAM, July 25: Tea producers in Ilam are facing difficulties in meeting the demand from international buyers Although the district is... Read More...