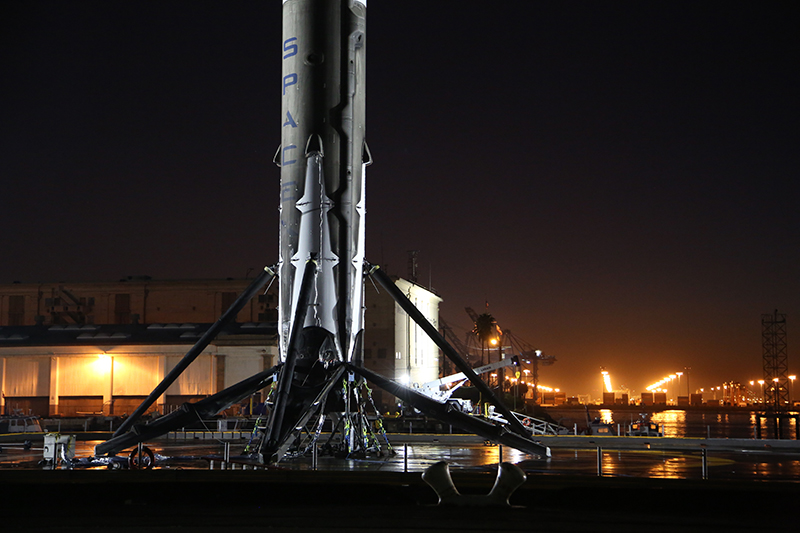 The SpaceX Falcon 9 rocket booster makes it's way into the port of Los Angeles Tuesday morning, Jan. 17, 2017. A SpaceX Falcon 9 rocket blasted off from California on Saturday, Jan. 14 and placed a constellation of satellites in orbit, marking the company's first launch since a fireball engulfed a similar rocket on a Florida launch pad more than four months ago. (AP)

The Indian Space Research Organization said the nano satellites — those weighing less than 10 kilograms (22 pounds) — were sent into orbit on board its polar satellite launch vehicle in southern India.

The agency said the launching of the 104 satellites was a record, overtaking Russia's feat of sending 37 satellites in a single launch in 2014.

The nano satellites belong to various companies in the United States, the United Arab Emirates, Israel, the Netherlands and Kazakhstan, according to the ISRO.

Prime Minister Narendra Modi tweeted that the "remarkable feat by ISRO is yet another proud moment for our space scientific community and the nation."

India has been striving to become a player in the multibillion-dollar space launch market, and has successfully placed light satellites into orbit in recent years. It hopes to eventually send astronauts into space.

In September 2014, India successfully guided a spacecraft into orbit around Mars. Only the United States, the former Soviet Union and the European Space Agency had been able to previously do that.

Travelers to India told to use banking system for more than `50,000

KATHMANDU, July 9: Travelers to India except for treatment should use electronic cards or other banking instruments for exchange of currency... Read More...

Doctor dies of COVID-19, first such case in Nepal
2 hours ago