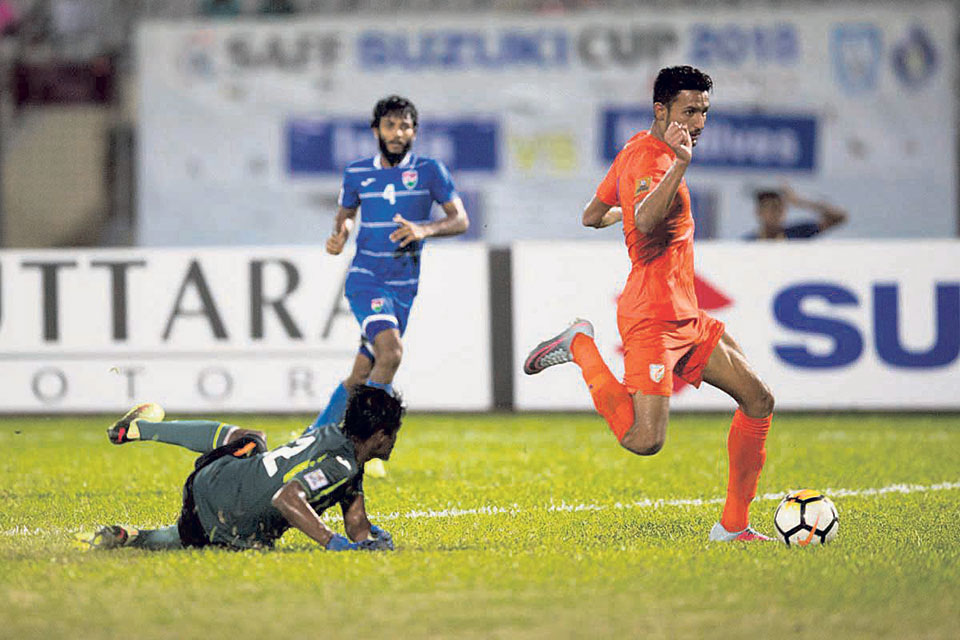 KATHMANDU, Sept 10: India and Maldives have advanced into the semifinals of the ongoing 2018 SAFF Suzuki Cup after India won the last Group B match 2-0 in Bangladesh on Sunday.

Following India’s win, the other Group B team Sri Lanka and Maldives were level on points, goal differences, goals against, and head-to-head, leaving the semifinal fate on a coin toss.

Maldives won the toss and advanced to the last four to book a clash against Nepal on Wednesday, who defeated the host Bangladesh 2-0 a day earlier to reach the semifinals as the group winner. Bangladesh, who had same points as Nepal and Pakistan, was knocked out on goal difference.

India will take on Pakistan in the other semifinal match later on the same day.

On Sunday’s game, despite creating more chances in the early stages of the game, Maldives failed to score any goal, and made defensive mistakes in the final third which allowed India to score two goals inside the first half at the Bangabandhu National Stadium in Dhaka.

Maldives looked the better side in the first 10 minutes of the game as it created a lot of chances, but failed to provide a telling ball in the final third. India, pressurized by quick attacking plays of Maldives, made several mistakes at the back. But, Maldives failed to control the possession in the final third.

India took the lead in the game through Nikhil Poojari in the 37th minute, while it doubled its lead through Manvir Singh in the 44th minute to double its tally before half time to take total control of the game.

Before the first goal was scored, Maldives looked pretty decent going forward and created several chances in front of the goal, but India was very close to scoring as a cross from Lallianzuala Chhangte was nearly headed by Mohamed Arif. The header hit the top woodwork in the eight minute of the match.

Akram Abdul Ghanee of Maldives had a chance to score early on for Maldives, but his shot from a long distance was nearly into the top Indian corner, but keeper Vishal Kaith made a fingertip save to deny him in the ninth minute. Chances were coming for India as well, and Nikhil’s cross in the 10th minute was headed over the bar by Poojari.

Maldives was under pressure after that as India had been attacking from the flanks prioritizing the crosses, but Maldives was spot on in defending despite giving ball away several times in the middle of the park.

India’s Farukh Choudhary got a chance in the 23rd minute, but his shot went far away.

Poojari then scored the first goal for India taking advantage of Maldives’ poor defending. India doubled its lead in the 44th minute as Singh dribbled past two defenders, rounded the goalkeeper to score into the empty net and made India’s chances stronger to advance into the semifinals as the group winner.

Maldives also got several chances after that as Ibrahim Mahudhee dribbled past three Indian defenders, created space to hit a shot, but his shot went just wide in the first minute of the three added on.

India looked more threatening in the second half, but never really controlled the middle area of the pitch, and prioritized the flanks with decent crosses from Poojari and Chhangte.

India nearly scored its third goal as Choudhary was through on goal, but the Maldives goalkeeper Mohamed Faisal came forward to grasp the ball. He got injured following the incident, but was soon on his feet after that.

Maldives created chances again, but substitute Naiz Hassan’s shot went just wide after he turned the ball around quite cleverly.

The Maldives is starting to believe it is best served by maintaining a safe distance from India and inching progressively... Read More...