Maldives ex-vice president detained on arrival by boat in India 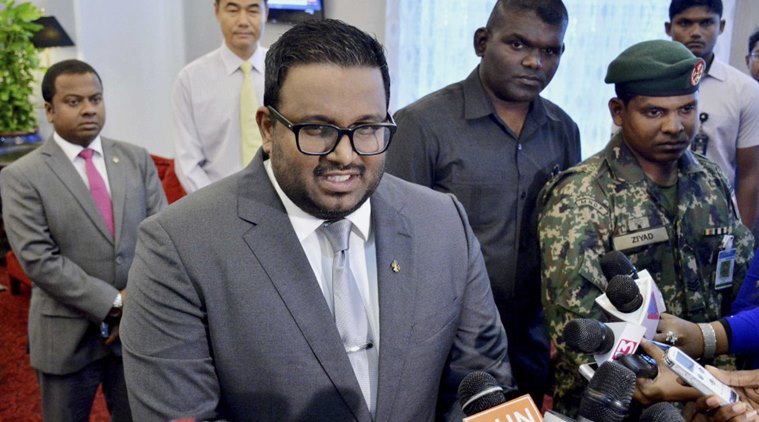 NEW DELHI/MALE, August 1: Indian authorities are questioning the former vice president of the Maldives, Ahmed Adeeb, for illegally entering the country after he arrived on a tugboat in the southern Indian port city of Thoothukudi, port and police officials said on Thursday.

Adeeb was sentenced to 15 years in jail in 2016 for allegedly plotting to assassinate the then-president Abdulla Yameen. He was also convicted of corruption and terrorism and faced a total of the sentence of 33 years.

A court in the South Asian archipelago subsequently ordered a fresh trial on the same charges this year after canceling his convictions, citing undue political interference.

Pro-China Yameen lost a presidential election in September and the new government of his successor, Ibrahim Mohamed Solih, has drawn the Maldives closer to India, investigating several infrastructure deals awarded to the Chinese.

The 37-year-old Adeeb, a key witness in a money laundering case against Yameen, was once seen as a future leader of the Indian Ocean island chain.

Yameen has pleaded not guilty in the case.

Indian authorities detained Adeeb early on Thursday after they were tipped off by the company which operated the Singapore-flagged tugboat carrying him, a port official in Thoothukudi told Reuters.

India’s foreign affairs ministry said Adeeb did not have a valid travel document and was hence not allowed to enter the country.

“Since he was not entering India through a designated entry point and did not possess the valid document, he has not been permitted entry into India,” the Ministry of External Affairs said in a statement.

It was not immediately clear whether Indian authorities planned to deport Adeeb back to the Maldives.

Maldives police said they were working to extradite Adeeb, who they say was summoned for questioning about embezzlement on Wednesday. “We will be taking legal action against individuals who helped and took part in the attempted abscondment,” Maldives police said in a statement.

Adeeb was under house arrest in June after returning from India, where he had gone for medical treatment but was subsequently freed earlier this month.

Adeeb said in a tweet on July 6 that he would never flee the country. “I will face your investigations and I will never run away from responsibilities. No matter what anyone says, I love you, Maldives,” he tweeted.

The tugboat, called Virgo 9, was carrying a nine-person crew including eight Indonesians and one Indian when it left Thoothukudi on July 11. It entered Male, capital of the Maldives, on July 13, Refinitiv ship tracking data showed.

The tugboat then left Male for Thoothukudi on July 27 with Adeeb on board, a port official said. When the tug arrived on Thursday, Indian authorities detained Adeeb after an Indian crew member on the vessel tipped off the company operating it.

Yadav elected as PP leader of JSP
18 hours ago

Study: Vaccinated people can carry as much virus as others
2 minutes ago