India does not have any plan to make Nepal unstable:BJP leader Vijay Chauthaiwale 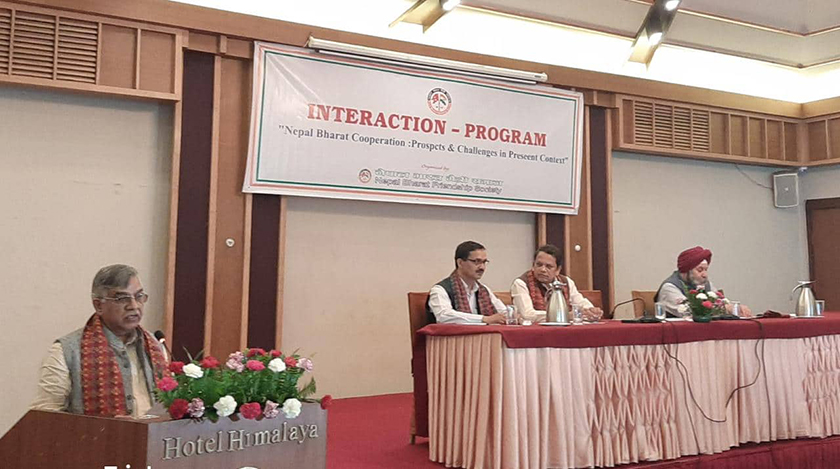 KATHMANDU, August 2: Chief of Foreign Affairs Department of Bharatiya Janata Party(BJP) Vijay Chauthaiwale on Friday has said that India does not have any plan to make Nepal unstable.

Speaking at the interaction program organized in the capital on Friday to discuss possibilities and challenges related to Nepal-India cooperation, Chauthaiwale has claimed that India will never intervene in the internal affairs of Nepal since it is a sovereign country.

“A group of people in Nepal say that India is pursuing its grand design to make it unstable. However, the reality is different,” said Chauthaiwale adding “India does not have any plan to make Nepal unstable”.

According to him, Nepal is capable of making its decision itself since it is a sovereign nation. Making a reference to the existence of differences between countries that are NATO members, he said that it is natural that Nepal and India sometimes experience ups and downs in the relation between them. “We want to promote a relation with Nepal on the basis of mutual trust,” said  Chauthaiwale adding “This relation should not be one-sided. It should benefit both countries”.

Speaking at the program, Indian ambassador to Nepal Manjeev Singh Puri highlighted the need for intensifying the age-old relation between the two countries. He said that India would continue its contribution to the development of Nepal.

Speaking at the program, former finance minister and Nepali Congress leader Ram Sharan Mahat said that economic development should constitute the main agenda of the relation between India and Nepal. He urged Indian government to help Nepal achieve its economic objective.

NEPALGUNJ, Aug 3: Nepalgunj Sub-metropolitan City office has been sealed off from Monday, hours after a local representative and some... Read More...

One more succumbs to COVID-19 in Morang

Worst times may be coming
17 hours ago

Curfew clamped in Banke after COVID-19 cases seen at community level
19 hours ago
Oli, Dahal to meet again on Tuesday as they differ whether to call Secretariat or Standing Committee meeting to resolve differences
14 hours ago