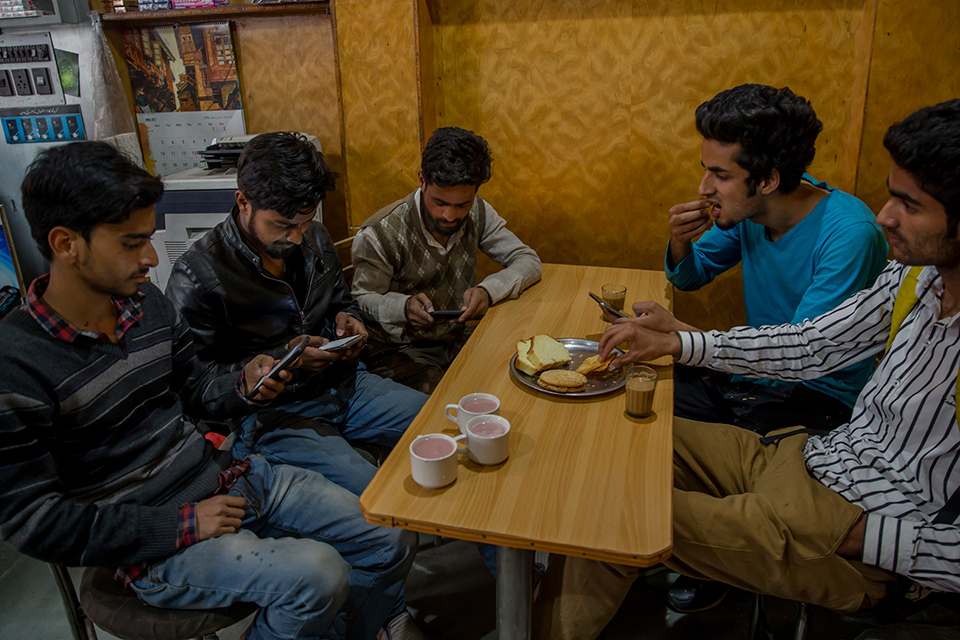 Kashmiri students browse internet on their mobile phones as they sit inside a restaurant in Srinagar, Indian controlled Kashmir, Wednesday, April 26, 2017. On Wednesday, authorities ordered internet service providers to block 16 social media sites, including Facebook and Twitter, and popular online chat applications for one month "in the interest of maintenance of public order." (AP)

SRINAGAR, India, April 27:  India's government has banned 22 social media sites in an effort to calm tensions in parts of the disputed region of Kashmir after viral videos depicting the alleged abuse of Kashmiris by Indian forces fueled protests. But the sites remained online Thursday morning as the local telecom company struggled to block them.

The government said Wednesday that the ban, to be in effect for one month, was necessary for public safety. "It's being felt that continued misuse of social networking sites and instant messaging services is likely to be detrimental to the interests of peace and tranquility in the state," the public order reads.

Pranesh Prakash, policy director for the Indian advocacy group the Center for Internet and Society, called the ban a "blow to freedom of speech" and "legally unprecedented in India."

An official with Kashmir's state-owned telecom company, Bharat Sanchar Nigam Ltd., said engineers were still working on shutting down the 22 sites, including Facebook and Twitter, but so far had been unable to do so without freezing the internet across the Himalayan region. The official spoke on condition of anonymity, because he was not authorized to give technical details of the effort to the media.

Meanwhile, 3G and 4G cellphone service has been suspended for more than a week, but slower 2G service was still running.

Residents of Srinagar, the region's main city, were busily downloading documents, software and applications onto their smartphones which would likely be able to circumvent the social media block once it goes into effect. Many expressed relief to still have internet access Thursday morning.

While the government has halted internet service in Kashmir in previous attempts to prevent anti-India demonstrations, this is the first time they have done so in response to the circulation of videos and photos showing alleged military abuse.

Others mocked the government. A Facebook post by Kashmiri writer Arif Ayaz Parrey said the ban showed "the Indian government has decided to take on the collective subversive wisdom of cyberspace humanity."

Kashmiris have been uploading videos and photos of alleged abuse for some years, but several recently posted clips, captured in the days surrounding a violence-plagued local election on April 9, have proven to be especially powerful and have helped to intensify anti-India protests.

One video shows a stone-throwing teenage boy being shot by a soldier from a few meters (yards) away. Another shows soldiers making a group of young men, held inside an armored vehicle, shout profanities against Pakistan while a soldier kicks and slaps them with a stick. The video pans to a young boy's bleeding face as he cries. Yet another clip shows three soldiers holding a teenage boy down with their boots and beating him on his back.

The video that drew the most outrage was of young shawl weaver Farooq Ahmed Dar tied to the hood of an army jeep as it patrolled villages on voting day. A soldier can be heard saying in Hindi over a loudspeaker, "Stone throwers will meet a similar fate," as residents look on aghast.