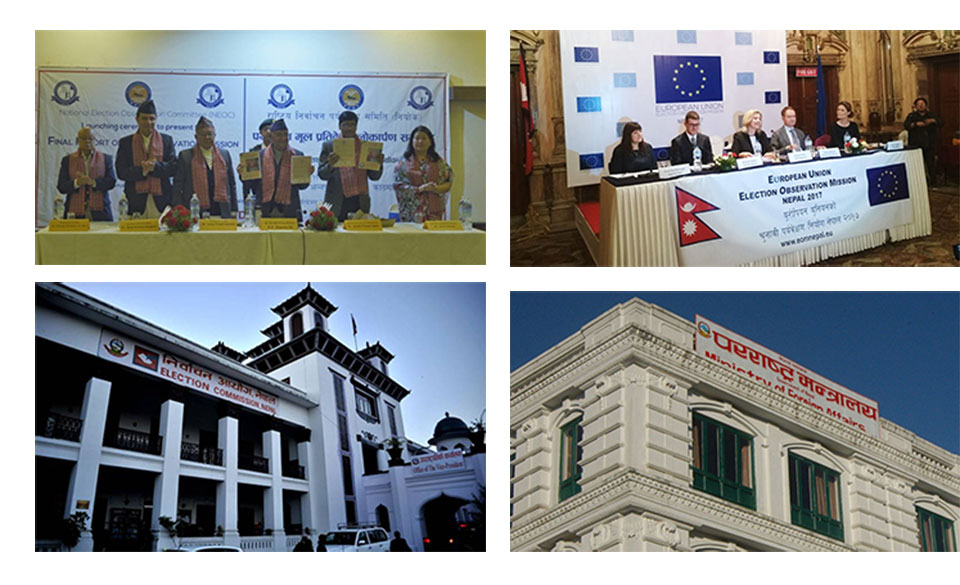 KATHMANDU, March 27: The report on the elections to the House of Representatives and Provincial Assemblies presented last week by the European Union Election Observation Mission (EUEOM) triggered hot discourse on the mainstream media and social networking sites.

The media and social networking sites were awash with the news related to EU EOM’s report what the Nepal government termed “a blatant intervention in the sovereignty of Nepal”.

The bitter discourse hit the headlines when a five-month-long EUEOM that spent around 3.5 Euro during the Federal and Provincial elections of Nepal (held between November 26 and December 7) presented its report on the Nepal elections.

The International Community and the Nepal government engaged in blame-games exchanging verbal barbs through media rather than finding out a solution to the problem through dialogues.

Press and Public Outreach Officer of the EU EOM Nepal Sarah Fradgley confirmed that the Nepal government boycotted a consultation meeting organized by the mission, further souring the ties. A country like Nepal that believes in democratic norms and values and a member of the United Nations should not refrain from engaging in dialogues to deal with such problems. Engaging in blame-games and refraining from dialogues will not yield any solution to the problems.

Of the total 29 recommendations contained in the report, the proposal to amend the Constitution of Nepal to remove the proportional inclusion provision provided to the group called ‘Khas-Arya’ is what irked the Nepal government and the ruling party CPN-UML most. The Nepal government took this proposal as something that directly intervenes in the domestic affairs of the country.

Meanwhile, CPN-UML took serious exception to the EU-EOM’s report. Issuing a statement on Sunday, UML concluded that EUEOM violated Article 3 and 4 of the Montevideo Convention by recommending the Government of Nepal to amend, inter alia, the Constitution of Nepal to remove the Khas-Arya community from the reservation quota under the proportional representation election category.

“Under Article 3 and 4 of the Montevideo Convention, Nepal is fully capable of determining or choosing its political, administrative, economic and legal and constitutional system independently. Under Article 8 of the Convention, any interference or attempt to interfere by any other state in such matters is against the international laws,” said the statement.

Lawmakers have, in the parliament, criticized the EU EOM for its controversial report and urged the international community to revise it. However, the western power remained adamant to its stance and said that it is up to the Nepal government to accept or reject the recommendations, further widening the rift between the two sides.

Similarly, Nepali Congress also touched upon this issue at the Central Working Committee meeting underway at the Central Party headquarters in Sanepa.

Talking to journalists after the meeting, Bishwo Prakash Sharma, spokesperson of the NC, said the party would come up with an official view on it.

While criticizing the statements made by top leaders of major political parties, Nepal Federation of Indigenous Nationalities (NEFIN) argued that the report of the EU Election Observation Mission correctly reflected the reality of Nepal.

Issuing a press statement on Thursday, NEFIN said the government demonstrated immaturity by issuing a statement, ignoring the positive aspects of the report. While terming the provision of reservation for Khas-Aarya in state structures ‘unscientific’, the body also asked the government to correct its statement.

EUEOM, in the report, commented that the Election Commission (EC) failed to provide sufficient information on voter turnout on polling centers and invalid votes.

On March 22, EU EOM had unveiled its report containing 29 recommendations on the elections to the House of Representatives and Provincial Assemblies.

Similarly, the report also criticized the EC for lacking transparency over voter-turnout on the polling centres and adequacy on the voter education.

Time will show which course the discourse will take and which side will be able to prove its claim. Adrian Blackledge, ‘In Discourse and Power in a Multilingual World’, puts powerful arguments travel along 'chains of discourse' until they gain the legitimacy of the state, and are inscribed in law.

Prime Minister KP Sharma Oli objected to the recommendations submitted by the EUEOM, urging the Mission to correct the report. Oli said so during a program organized to unveil the main report prepared by the National Election Observation Committee.

PM also commented that EUEOM’s report undermines the independence and sovereignty of Nepal that, according to him, seems to have been done as an act of revenge against the Nepal government after it sent back two election observers home for their involvement in promoting Christianity.

Similarly, National Assembly lawmakers were divided over the report. UML and NC lawmakers took exception to the report dubbing it as “a direct interference in the domestic affairs of Nepal while Federal Socialist Forum Nepal (FSFN) and Ratriya Janata Party Nepal (RJPN) expressed their views in favour of the report.

Sher Bahadur Kunwar, Lawmaker from UML, described the EU report as 'a direct intervention in the domestic affairs' rather than a recommendation. He said, “EU does not want peace and integration in Nepal, it wants to bring conflicts among the Nepali people.”

Brishes Chandra Lal, lawmaker from RJPN, stated that EUEOM report is suggestive, so we can’t take it as interference. Similarly, Pramila Kumari, a lawmaker from FSFN, expressed her views saying that the Nepal government should take the report positively. "It is nothing but a waste of time to make such a hue and cry over it."

Social media giants are exploiting children by hooking them on their sites in a ploy to generate more traffic, warns... Read More...

The number of foreign tourist arrivals in Nepal encouraging during off season: NTB
45 minutes ago