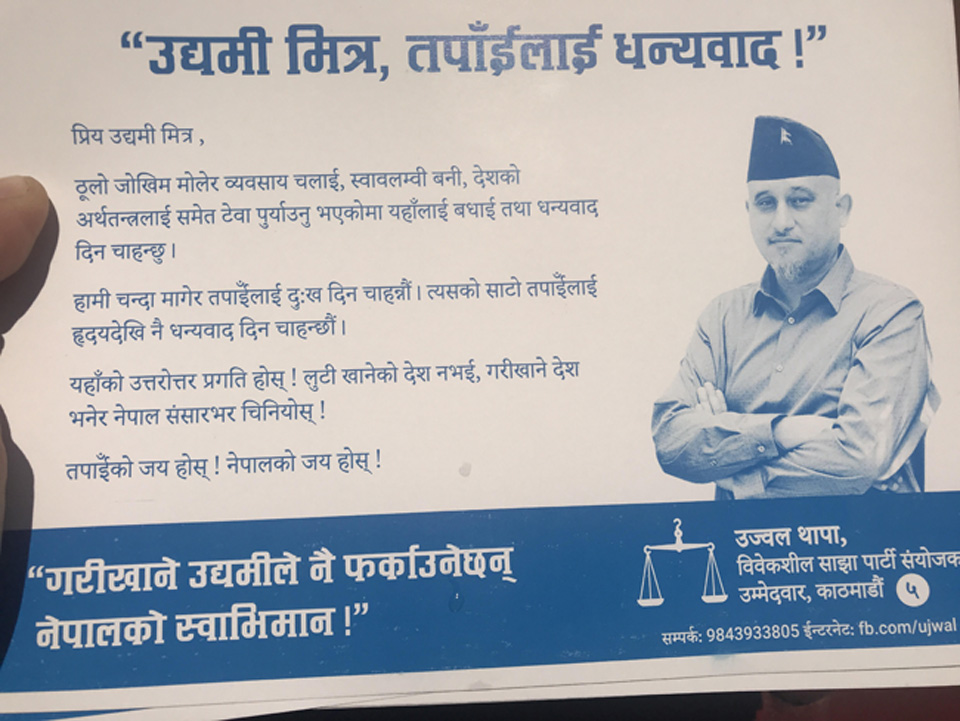 Pamphlet of Ujwal Thapa, the candidate of Bibeksheel Sajha Party from Kathmandu-9.

KATHMANDU, Nov 29: With the second round of elections to the House of Representatives and Provincial Assemblies nearly a week ahead, political parties have expedited their elections campaigns across the country.

The use of thanksgiving card, Posters, party flags is not any new modus operandi for publicity.

With the development of digital technology, social networking sites are nowadays playing a pivotal role in the poll campaigns organized by different parties.

Pamphlets dotted along alleys, roadways, posters on the street walls and flags of different political parties hung on street lamps depict the degree of fever of elections fever.

The publicity and advertisements are done in order to appeal to the voters and to garner a higher number of votes. The only the difference in publicity between the past and the present is the social networking sites.

The political parties have their own social networking sites these days that are basically used to publicize election rallies and messages about their political agendas. They have developed the knack for using new digital technologies to disseminate election-related activities and party agendas.

Major parties are found to be exploiting social networking sites and mainstream online news portals for the election campaigns of their candidates as an advertisement targeting the upcoming elections.

Likewise, Nepali Congress and CPN-UML‘s pop up add can be seen on the different online news portals.

The second phase of the elections to the House of Representatives and State Assemblies will be conducted in the remaining 45 districts on December 7.

KATHMANDU, Oct 31: Were you ever wondering why there is no election fever in your locality even though a week has... Read More...