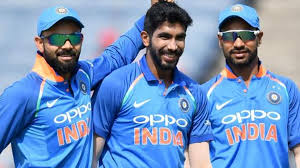 KATHMANDU, DEC 27: There were no major surprises as BCCI announced its squads for the Sri Lanka T20 series and the ODI series against the Aussies from Down Under. Indian Team Stalwarts Shikhar Dhawan and Jasprit Bumrah make their way into the team for both the series. The two are returning from injury that has seen them being left out of the team in recent times. Vice- Captain, Rohit Sharma, who had a humungous 2019, has been given a privileged and much needed rest, at the beginning of 2020, for the three T20’s against the Lankans, he does however, return to take his place in the ODI series against the hostile Aussies.

While Dhawan takes Rohit's spot in the T20I squad, Bumrah comes in for swing bowler, Bhuvneshwar Kumar, who missed the West Indies ODIs because of a groin injury and will be absent from the two upcoming series as well.

In the ODI squad to face Australia, Dhawan's return means Mayank Agawal - who came in as the left-hander's replacement against West Indies – unluckily misses out! Bumrah comes in for Deepak Chahar, the swing bowler, who has now been sidelined until April 2020 due to a stress fracture to his lower back.

Once again, as has been the case since the ICC CWC 2019 in England, MS Dhoni continues to be absent from the limited over’s squads.

Nepse inches up 3.33 points after falling continuously for four days
4 minutes ago