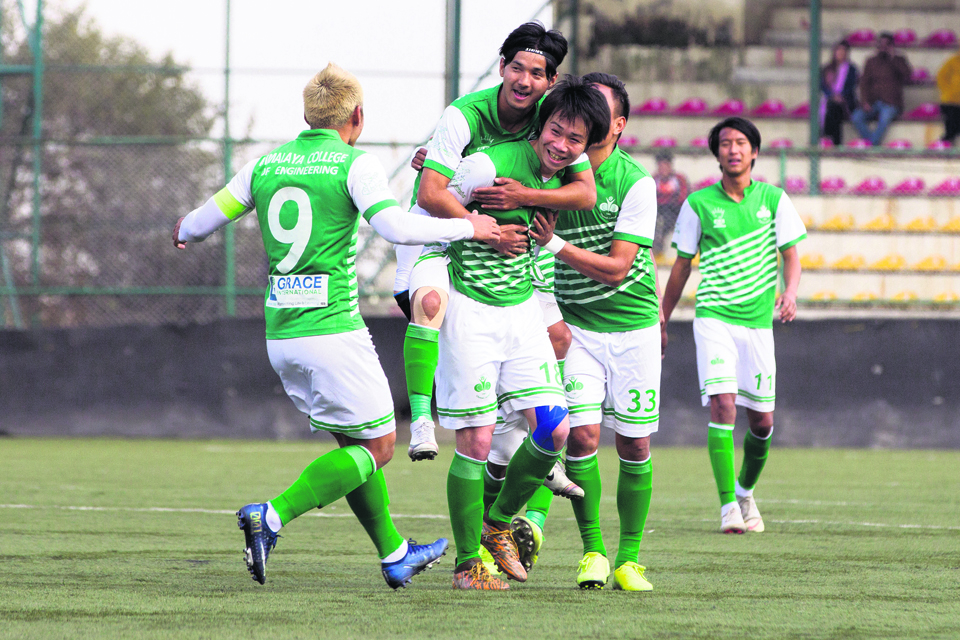 KATHMANDU, Feb 4: Manang Marshyangdi Club lost more ground in the title race after Chyasal Youth Club inflicted the first loss on the holder, 2-0, over a spell of two seasons in the ongoing Martyr’s Memorial A-Division League in Lalitpur on Monday.

After winning 12 matches and drawing one in last edition’s league, it became the champion in the no-relegation format league, but has been inconsistent this time around as it drew four of the nine matches prior to the Chyasal clash.

With the departure of start players like Bishal Rai, Sujal Shrestha and former captain Biraj Maharjan, the team has struggled to continue last season’s momentum and lost further ground in the title charge as it has gone four points adrift of leader Tribhuvan Army Club.

In the late kick-off at the All Nepal Football Association (ANFA) Complex in Satdobato, goals from Taigo Nakamura and captain Santosh Shahukhala secured the third win of the season for Chyasal.

Despite having most of the ball in the game, Manang was not clinical in front of goal as it missed a lot of chances, and was outmaneuvered by Chyasal with more shots and more shots on target in the game.

Chyasal got the first real chance of the game through Amir Shrestha, but the winger’s volleyed shot from inside the box went just off target in the third minute.

Manang got a few chances from the set-pieces, but was not able to convert them into goals as Kamal Shrestha’s product into the Chyasal box was not turned into goal by the Manang forwards.

Shahukhala got another chance for Chyasal in the 10th minute, but his long range shot from outside the box grazed over the crossbar.

The first half saw both the teams get minimal amount of chances and more through the set-pieces, but Chyasal converted it in the 20th minute for the first goal of the game.

Nakamura stood up to take the free-kick and his right-footed shot went straight into the post leaving Manang keeper Deep Karki stunned as Chyasal put its nose in front in the first half.

Manang began to adjust in the game and started creating chances after conceding the goal, but its final product let it down as the team’s finishing problems were largely evident.

Anjan Bista hit a shot from inside the box in the 26th minute, but Chyasal keeper Alan Neupane saved the ball brilliantly.

Shahukhala got another chance to double the score for Chyasal, but his shot from outside the box went over the bar again in the 27th minute.

Chyasal started creating pressure from the wings, more so from the left, with constant crosses inside the box, but the chances went in vain as Manang defended better and cleared the ball quickly.

Bista got another chance for Manang in the 36th minute, but his shot from just outside the box went wide off target.

Manang started the second half on attacking note as Nishan Limbu had the first chance of the half to score, but missed. He hit a right-footed shot from the opposition’s box in the 49th minute, but missed the target.

Chyasal then sat back to defend with good clearances which pressurized Manang to come at it, but as the holder failed to control and dictate the tempo of the game, the winning team’s tactics became spot on.

Hemant Thapa Magar got a real chance to double the score for Chyasal, but his left-footed shot from inside the box was off target after Shahukhala put him clean through in the 52nd minute.

Manang got a couple of chances in the second half, but Shahukhala’s strike in the fourth minute of the injury time stunned the team as it went two down with no hopes of coming back into the game.

Nakamura produced a good through ball to Shahukhala and the forward scored his seventh goal of the season placing the ball on the right side of the post.

With the loss, Manang sits on third with 19 points, three behind of Machhindra Club and four behind leader Army. It has won five games this season, drawing four and losing one. Likewise, Chyasal climbed up to the ninth place with 12 points including three wins, three draws and four losses. It is now only three points adrift of fifth-placed Sankata Club.

In the first match of the day, a first half strike from Sujit Budathoki sealed a crucial 1-0 win for Jawalakhel Youth Club as the team inflicted the sixth loss on Brigade Boys Club.

Budathoki gave Jawalakhel the only goal of the game in the 32nd minute as he took advantage of a poor handling from Brigade goalkeeper Bishal Sunar.

With the win, Jawalakhel has climbed up to the sixth place with 15 points including five wins, two draws and two losses, while Brigade sits in the 11th rank with two wins, two draws and six losses. It is now only four points adrift of bottom-placed Saraswati Youth Club.

On Tuesday, NRT will be looking to get back to the fourth place with a win over Friends Club.

Why was the University Bill introduced, leaving aside the Education Bill?
4 minutes ago

No decision on home ministry leadership until full text of SC’s verdict on Rabi Lamichhane is out: PM Dahal
57 minutes ago