In sync with nature

Although he is a student of management, Giri has been working as a naturalist for over four years now. He says that being around his father and accompanying him on a few trips got him interested in this line of work and even though Giri hasn’t undergone any formal training on the subject, he has picked up a lot of knowledge from his father and by observing nature and wildlife himself. He mentions that one of his uncles from Lumbini also taught him a lot about birds (including bird identification) when he was growing up.

Giri got his first job as a naturalist at Satpura National Park in Madhya Pradesh in India. He worked there for a year and, during this time, got an in-depth idea about this field of work and what responsibilities he has to shoulder as a naturalist and nature guide. Then, about three years ago, he was transferred to Barahi Jungle Lodge at Chitwan and is currently employed there. He reveals that he was pretty happy about the transfer because he felt pretty lonely while working at India and working closer to home meant he could keep in touch with his family and friends.

Although he thinks he has similar responsibilities now as a naturalist and nature guide as he did when he was working at India, Giri admits that he likes working in Chitwan a little bit more because of the lush green jungle. He further explains that India has thin and dry jungles but Nepal has dense and evergreen forests so it’s easier to spot more animals here as the jungle provides a suitable environment for them and more animals live here.

“My favorite aspect of working as a naturalist is getting to communicate with a lot of people from around the world who come to Chitwan to learn or see interesting animals found here. The connections I make happen on both professional and personal levels,” says Giri adding that he likes the cultural exchange aspect of it as well.

Among the many he has met so far, two people he finds himself thinking about very often were a bird watcher couple from New Zealand who had spotted over 10,000 different species of birds while traveling around the globe. While on safaris, they would identify and introduce birds quicker than Giri could and so he learnt a lot from them.

Because Giri’s job entails dealing with animals, he says that he has faced many shocking and unexpected moments. One such memorable incident that happened a few months ago was when he was on a jungle walk with a guest. During jungle walks, he has a routine of jumping over a fallen tree. But this one time, a rhino was sleeping at the other side—right where he usually landed after jumping. He saw the animal’s silhouette from the other side and changed his route that day.

As much as he likes teaching interested people about animals and nature, he admits that he sometimes gets annoyed with them when they disturb the animals. He reveals that some guests make loud noises or start screaming in excitement when they are in the jungle or when they see an animal and that frightens all the animals that are around. Giri manages the situation by either subtly getting the person away from the animal or requesting the person to be quiet and explaining that loud sounds startles the animals.

And over time, Giri has become quite good at steering people away when they disturb animals or escaping when he unexpectedly comes across an animal and feels that their lives are in danger. He recalls a scary incident from some time ago while he was returning from a jungle walk one misty morning. Giri was with a client when the two of them came across a pair of mother and baby rhino. The rhinos as well as Giri and his client went still at the unexpected encounter, each anticipating the other’s next move. After a while, Giri asked the client to follow him swiftly, and they turned back around, changed the route and escaped.

As a jungle guide, Giri has a lot of responsibilities. He accompanies people during most of their adventurous activities including jungle walks, safaris, visiting nearby villages, etc. Among all these, he says boating is his favorite activity. He explains that even though generally, very few animals can be sighted during this activity, whatever you see—be it a Gharial or a migratory bird—you get to see it very clearly.

For now, Giri plans to continue doing what he is doing. After completing his bachelor’s degree this year, he says he will have more time to explore the jungles near him and learn about the habitat there. The only thing that worries him is how our government is neglecting and putting in zero effort to preserve and promote wildlife. “If this sector were to be promoted properly, it could significantly aid the tourism industry during the Visit Nepal 2020 campaign,” he concludes. 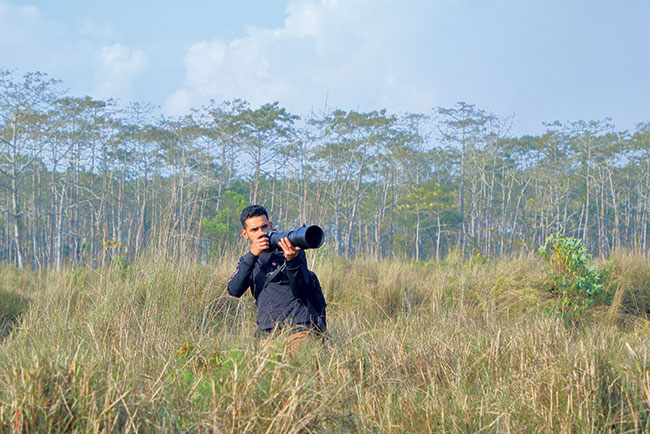 Call of the wild

Every human being has a responsibility toward nature as we exist only due to the gifts that nature has bestowed... Read More...

Over 3,000 benefitted by drinking water in Beshishahar
23 hours ago

Those involved in Lalita Niwas land scam will be brought to book in few days: Minister Aryal
21 hours ago

Nepali students in Wuhan in a fix as city stays in lockdown
8 hours ago
Kalaiya Sub-metropolis moves against pavement encroachment
7 hours ago
MCC should be approved soon, says NC Prez Deuba (with video)
26 minutes ago

CIT not for earning profit: Finance Minister
20 hours ago