In Switzerland migrant women bear a bigger brunt of inequality 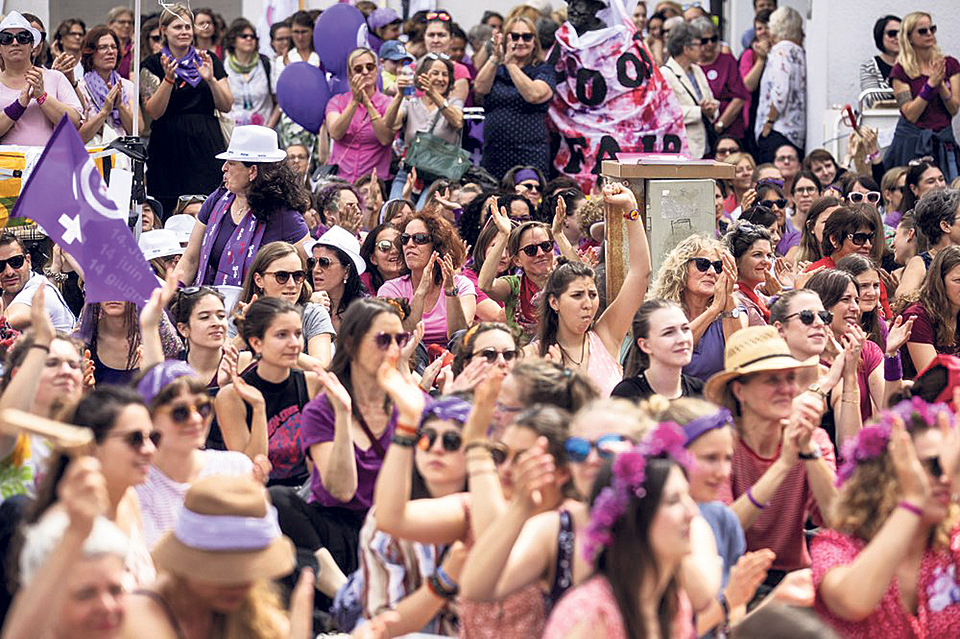 Women protest during a nationwide women’s strike in Lucerne, Switzerland on June 14. There was list of several reasons motivating people to take part in the strike. These range from unequal wages to pressures on part-time employees, the burden of household work and sexual violence. Photo Courtesy: AP

KATHMANDU, Sept 3: On June 14, Switzerland saw one of the biggest strikes in the recent years, something that the otherwise quiet country had not seen in a long time. Nearly half a million women alongside men, many of them donned in purple shirts, hit the streets displaying placards and chanting slogans demanding end to inequalities.

The protest, held four months before the general elections scheduled for October, was a stark reminder of how little has changed for women in Switzerland since June 14, 1991 when a record number of protesters had taken to the street with a similar set of demands.

A long way to go
For a country where women in one of the cantons were struggling for voting rights as late as 1991 (rest of the province voted in 1971), Switzerland has made a marked progress toward addressing gender gaps. Women are becoming more visible in social, economic and political spheres of Swiss life. If records are anything to go by, there are more women in politics, government, business, academia and media.

Yet the situation is not as rosy as the statistics portray. Despite constitutional guarantee of equality between men and women, there are practical difficulties, said Laurence Difélix, a journalist with Radio Television Suisse, a public broadcasting service based in Geneva. During motherhood, women unlike their male counterparts are forced to either quit jobs or take on positions with slim prospect of career advancement. Many especially those working in the private sector are paid less. Difélix herself had to experience such discrimination at the workplace.

“In Switzerland, wages are a private matter. It is therefore difficult to know how much my male colleagues earn! But my husband works in the same company as me and we have been able to watch our wages up after the birth of our daughters. Before being parents, we had the same wages. Five years after the birth of our first daughter, my husband earned 1/6 more than me,” she said.

“Despite the introduction of the constitutional article on equality between men and women in 1981 and the equality law, which is still non-binding, women’s salaries are still about 20% lower than men’s in the private sector and 16% lower in the public sector,” Swissinfo.ch, a news website, quoted Catherine Friedli, secretary of the VPOD/SSP union, one of the organizations behind the protest, as saying before the general strikes.

Pay gap is not the only problem. The corporate world remains largely a men’s world as women are seldom trusted for management positions. Despite changes in laws, women still face arrays of problems including violence in and outside the household confines. A study by Amnesty International found that 59% of Swiss women have experienced sexual harassment.

This year’s protest was significant in a sense it also brought to the fore the issues previously less heard of -- including that of migrant women, domestic workers and the LGBTQ community. In its manifesto, the Women’s Strike Geneva Committee, one of the co-organizer of the protest, stressed that their aim was to end a situation wherein women workers are discriminated on basis of their gender, nationalities, work and sexual orientation.

In cities like Geneva and Lausanne, members of migrants groups and organization like Decouvrir, an organization which works for migrants, had taken part in the protest.

The invisible workforce
In comparison to others, the situation looks particularly grim for migrant women. It’s hard to find jobs, harder to find one matching one’s qualifications. Most migrant women work in a handful of sectors like care and service industry, areas discarded by others groups, and are usually paid less.

It’s been more than a year since Rita Sharma (name changed), who hails from Kathmandu, started looking for job in Geneva, the city where she lives with her family. But she has not been able to find one despite spending months on learning French language, training and shooting resumes at available vacancies in a regular interval.

“If you are a foreigner, especially a woman, then chances are that you will have to wait for years to get the job despite having right skills and experience,” said Sharma.

A report by the Federal Commission on Migration (FCM) validates those claims. According to the report, migrant women are the least preferred group in the job market with employment rate of 68.8%, far too low compared migrant men (78%), Swiss women (83%) percent and Swiss men (85 %).

Low desirability in job market, according to Sharma, force foreign women like her increasingly rely on personal networks to find a job.

Given that migrants from Europe and America have bigger presence and better networks, they are better placed for work opportunities. Around 83 percent of women migrants in Switzerland come from Europe.

“There are hardly 500 Nepalis in Switzerland and the social fabric is not as good as those of westerners,” said Sharma. Without a job, Sharma, despite having skills and education, have to rely on her husband’s earning from UN related works to run family and pay for costly education of their kid.

Sarah Gamblin, who heads the communication department of Decouvrir, an organization that is offering hundreds of migrants like Sharma, said several other factors, besides individual network, including language and cultural issues make integration harder for foreigners, both men and women. Founded by a Colombian migrant woman, her organization offers coaching and training programs for migrants and helps connect them with the placement agencies.

“It’s tough for women as they also have to take care of their children and family,” said Gamblin.

Scarcity of jobs is the most common of many problems that migrant women face. There are problems of racism with official statistics suggesting that almost 60 percent of the country’s population see it as an important social problem. There are also issues of workplace transparency as it’s considered a taboo to talk about money and wealth.

For migrants, no issue appears as pertinent as the issue of integration given that the Swiss society’s largely skeptical attitude toward migrant workforce. Immigration, like elsewhere in the West, is a divisive topic in Switzerland and many Swiss fear that the influx of foreigners could push their own identity in danger.

Integration is a pressing issue for migrants from countries like Nepal who are alien to the country’s language, culture and religion.

Guari Gubaju, who migrated from Kathmandu to Switzerland more than two decades ago, feels that there is no visible discrimination toward migrants on the surface although she thinks that that integration remains a big issue.

She said that Switzerland’s diverse and complex culture and language make integration difficult. Switzerland has four national languages—German, French, Italian and Romansh—and, having command over just language greatly limit one’s chance of getting job and socialize.

“It could take years acquainting yourself with the language and culture if you come from completely different heritage. Once you overcome these barriers, life gets much easier,” said Gubaju, a care worker.

Silver lining
Despite its small size, Switzerland is a leader in many respects. It has a stellar record on global human rights campaign. It’s a leader in innovation and technology, let alone the banking and hospitality industry. It’s also known for its inclusion and federalism through practice of direct democracy. But many Swiss are unhappy with the country’s poor record on gender equality and want their government lead by example in areas of gender equality by ensuring more time, respect and money for women. It was the reason tens of thousands of men hit the stress in support of women. Has the protest marked a new dawn on areas of gender equality in Switzerland?

Difélix, the journalist, said that it was still too early to see benefits of the movement, but she thinks that things were already changing and changing for good.

“In my company (Radio Television Suisse), we asked the management to sign a charter in which it undertakes to ensure the progress of the careers of women and mothers, and to prohibit sexism internally. The signature should (I hope) have arrived before the end of the year,” said Difélix.

(This report was produced as a part of En quête d’Ailleurs (eqda) fellowship program 2019.)

IN PICS: Medical supplies from Switzerland worth USD 8 million arrive in Nepal

KATHMANDU, May 22:  A special cargo flight from Switzerland carrying medical supplies worth USD 8 million arrived at the Tribhuvan... Read More...