In BIMSTEC, push for SAARC 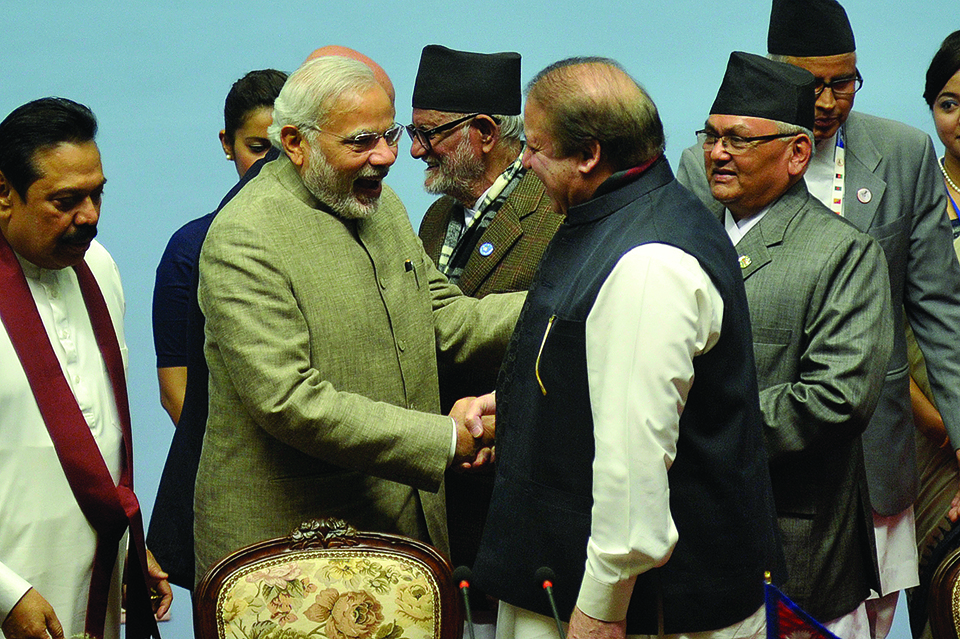 Gyan P Neupane is with Republica’s Political Bureau. He covers bureaucracy, governance, earthquake reconstruction, culture, archaeology, among others. He has been in journalism since 2011 being based in Kathmandu, Nepal.
gyan.neupane@myrepublica.com

It marked a terrific moment in history when Indian Prime Minister Narendra Modi and his Pakistani counterpart of the time Nawaz Sharif shook hands during the 18th South Asian Association for Regional Cooperation (SAARC) Summit in Kathmandu. It raised the hope for better relations between two nuclear rivals. Nepal had mediated this handshake and it was covered widely by the media at home, across the region and beyond.

November 27, 2014, was a special day for the region as it had paved a way to hold the talks between two major giants. The same evening, both leaders had a ‘personal chat’ in a reception hosted by Nepal’s Prime Minister Sushil Koirala in honor of visiting SAARC heads of states and governments.

Following this historic handshake, it was thought the two countries would reopen the substantive talks and resolve all the differences. But soon the momentum fell. The effort Nepal had taken made no differences. The regional cooperation fell into stagnation, and the 19th SAARC Summit, scheduled for November 2016 in Islamabad, remains deferred indefinitely. India boycotted the summit alleging Pakistan’s hand in Uri terrorist attack. When Afghanistan, Bangladesh and Bhutan stood by India’s side, the possibility of Islamabad summit formally ended. The fate of the 19th summit hangs in balance now.

Modi and Sharif had held several rounds of meetings after the Kathmandu handshake—on the sidelines of Shanghai Cooperation (SCO) summit in Russia in 2015, at the 21st UN Climate Change Conference in Paris in November, 2015, during Modi’s surprise visit to Lahore in December 2015 and SCO Summit in Kazakhstan in June 2017.

The relation between the two leaders was expected to improve after Sharif attended Modi’s oath-taking in 2014, in what was the first ever visit by a Pakistani leader to India in such event. All in vain. None of the meetings between the two resulted in a favorable environment for regional integration.

SAARC has not met for the last four years. This is the longest gap since its establishment in 1985.  SAARC must be made a regular functioning institution but how do we get there?

During its formation, India and Pakistan were reluctant to join the initiative. India thought that its neighbors would gang up against it and Pakistan was worried that India would work against it by using SAARC as a tool. Yet, eventually they came together.

Nepal as a mediator

Nepal, the current chair of SAARC, has cordial relations with both India and Pakistan. Thus the country has an opportunity to work as a mediator to make Pakistan and India stand for SAARC. Here is an opportunity for KP Sharma Oli’s government to showcase its diplomatic ability by helping reduce tensions between the two South Asian heavyweights. But for that both India and Pakistan should trust Nepal as a mediator.  Nepal can use BIMSTEC forum to hold the talks with India to rescue SAARC from coma.

Lately, India has shown no interest in SAARC. It has shifted its focus to groupings like BIMSTEC and Bangladesh, Bhutan, India, Nepal (BBIN) initiative. Critics interpret this as India’s goal of creating ‘SAARC minus Pakistan.’

In an interview with this newspaper during his Nepal visit last March, then Pakistani Prime Minister Shahid Khaqan Abbasi had said that Nepal could facilitate talks between India and Pakistan. He had also expressed commitment to convene SAARC Summit as soon as possible. This is the proof of how Pakistan also thinks Nepal can play the role of a mediator.

Cricketer-turned-politician Imran Khan—all set to become the next Prime Minister of Pakistan—has made it clear that he is looking forward to improving relations with India. “If they (India) take one step toward us, we will take two, but we at least need a start,” he had said in his victory speech. Modi congratulated him over the phone and sought for a new era of relations with Pakistan.

Many have seen this as two rivals resuming talks. They might improve the relation but it won’t be lasting if they cannot work collectively on common agenda. Khan’s vision of ‘Naya Pakistan’ cannot be realized without creating a new avenue in Indo-Pak cooperation.

Reportedly, Khan is inviting the heads of states and governments of SAARC countries at his oath-taking ceremony. If Modi accepts the invitation and goes to Pakistan, it will leave a very positive message. It will mark a major breakthrough to rebegin the talks between two neighbors which can eventually create environment for SAARC summit.  As a matter of fact, if heads of governments and states of SAARC countries actually go to Pakistan, it will be a mini SAARC summit in itself—laying the foundation for holding 19th SAARC Summit.

We don’t need to restructure SAARC. We need to reboot Indo-Pakistan relation. Nepal should not let 2018 go without having the summit in Islamabad. During this BIMSTEC summit in Kathmandu, Nepal has got a lot to do for SAARC.