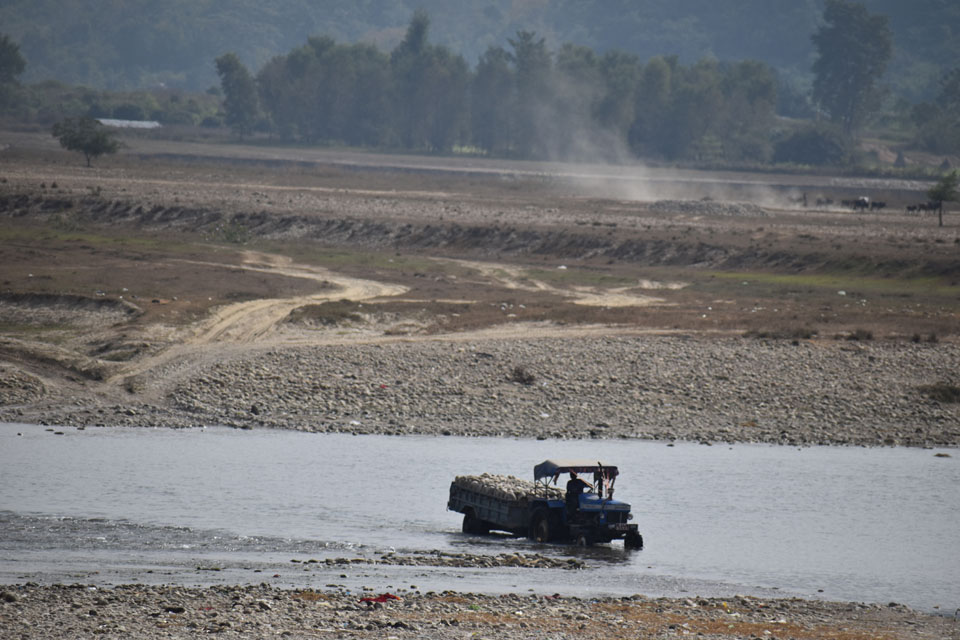 A tractor loaded with boulders mined illegally from Chure crosses Kamala River that flows between Siraha and Dhanusha districts.

SIRAHA, Dec 17: Contractor and representatives of local units have colluded to illegally extract river products from Kamala River that originates in Chure hills.

The contractor, which is permitted by to extract river products from Kamala River in Karjanha Municipality of Siraha and Ganeshman Charnath Municipality of Dhanusha, have been found extracting boulders from the Chure hills as well.

The government has permitted any form of extractions from Chure hills.

Ram Babu Yadav, the mayor of Ganeshman Charnath Municipality, said that the municipality was aware that the contractor was illegally extracting Chure hills for boulders by producing slips to extract river materials from the Kamala River issued by local units. "We have found that the contractor has been using slips issued by local units to extract materials from Kamala River to illegally mine boulder from Chure hills," he said, adding that the municipality some days ago seized six tractors carrying river materials.

But instead of taking any action against the wrong-doer, the municipality released the tractors after emptying the materials on the riverbank.

The two municipalities have jointly awarded the contract to extract river materials from Kamala River which flows between Dhanusha and Siraha districts. The contract has been awarded to Mirchaiya-based Bikas Nirman Sewa Pvt Ltd at the price tag of Rs 6 million a year.

Though the contract allows Bikas Nirman Sewa Pvt Ltd to extract river materials only from Kamala River, it has been extracting boulders and other resources from the Chure hills.

About 100 tractors supply river materials to a crusher plant and Bandipur every day, a tractor driver told Republica.

"This has been going on for the past three months. Local administration is not doing anything to stop this as police and local units are working hand in glove," a local told Republica, requesting anonymity.

Though there is a traffic police post at Bandipur, the overloaded tractors ferry river materials without any hindrance.

Mohan KC, chairperson of Ward 1 of Ganeshman Charnath Municipality, said he was aware of the extraction of resources from Chure. "I alone can do nothing to control this. Such illegal mining could lead to floods and landslides during monsoon," he said, adding: "Even locals have complained to us stating that illegal extraction of resources in Chure could have dire consequences."

KC is worried that floods could affect East-West Highway as well.

Locals complained that elected representatives were joining hands with contractors to exploit Chure going against their commitment of promoting natural resources. Mayor Yadav said contractor won't be able to pay revenue to the municipality if it cannot extract resources. "I am working in coordination with Chief District Officer of Siraha, Rudra Prasad Pandit, to extract more resources from Kamala River," Yadav said, adding: "The CDO is positive about using earthmovers in the river to extract more materials."

KATHMANDU, July 19: The date for opening financial proposal of five firms to award the task of rebuilding Dharahara, which was... Read More...

Two killed in separate accidents in Sunsari
45 minutes ago