How today's Barca fares vs. Guardiola's best? Not too well 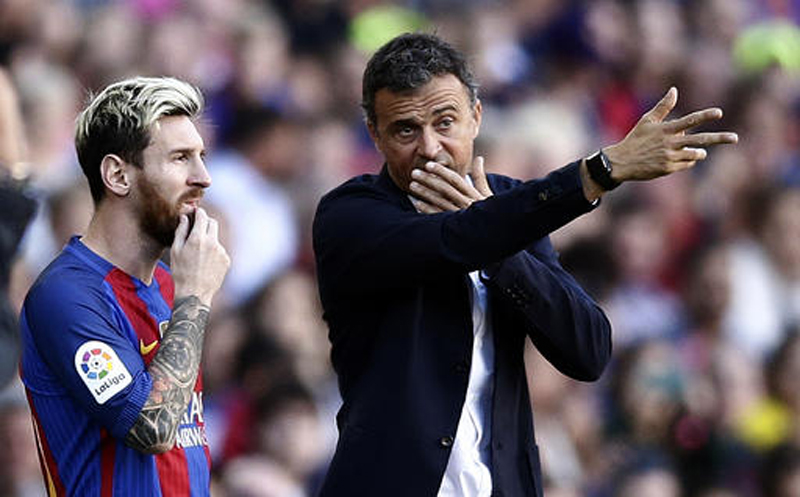 BARCELONA, Oct 17: Pep Guardiola, the managerial mastermind who led Barcelona to 14 of 19 possible titles in four seasons, is returning to Camp Nou.

This time he will be at the helm of Manchester City as he faces his boyhood club in the Champions League on Wednesday.

But how does the best of the teams Guardiola coached from 2008-2012 stack up against the current Barcelona side?

Here is a comparison of Barcelona's current players with those led by Guardiola in 2008-09, the team that started the club's winning era by becoming the first Spanish club to win the Champions League, Spanish league and Copa del Rey in the same season.

Barcelona repeated that rare feat of winning the treble of titles two seasons ago under present coach Luis Enrique.

The Argentina star won his first of a record five Ballon d'Or awards in 2009, after having scored important goals such as his double in a historic 6-2 win at Real Madrid and the second goal in a 2-0 win to beat Manchester United in the Champions League final.

Guardiola got one more superb season from striker Samuel Eto'o, and squeezed out some of the last vintage goals that Thierry Henry had to offer.

Hard to top that, right?

With Messi moving away from a pure scorer to becoming both scorer and playmaker, Luis Suarez and Neymar have proven to be perfect fits up front. Suarez is the voracious goal-taker that Messi needed to focus on orchestrating, while Neymar's dribbling skills and speed are almost unstoppable. The trio broke scoring records in each of the last two seasons.

Both teams enjoy the devilry of Andres Iniesta, but the 2008-09 side had both Yaya Toure and an upstart Sergio Busquets sharing time in front of the defense, as opposed to the current team's reliance on Busquets as a holding midfielder.

The major difference, however, is the downgrade from Xavi Hernandez to Ivan Rakitic.

Rakitic is more athletic and a better tackler than Xavi, but that cannot trump Xavi's vision, poise and control of the match. The World Cup winner was Guardiola's on-pitch general of a possession-based passing attack that bewildered opponents.

In other words, it's a no-brainer.

Always at the service of Messi, Xavi and Iniesta, Barcelona's defense under Guardiola was easy to overlook.

But that 2008-09 team enjoyed Dani Alves and Eric Adibal in their prime, a fully fit Carles Puyol before he was diminished by injuries, and a Gerard Pique hungry to come into his own.

Pique now anchors a back line that is under transition.

Jordi Alba offers blistering pace on the left flank, but its other two positions are in flux.

Sergi Roberto, a converted midfielder, has impressed as Dani Alves' replacement so far, while the other central defender position is in dispute between an aging Javier Mascherano and newcomer Samuel Umtiti.

Marc-Andre Ter Stegen has just inherited the full-time goalkeeping responsibilities from Claudio Bravo. Despite his passing skills and ability to make spectacular saves, the German needs to improve his decision making to reach the level of Victor Valdes from 2008-09.

Even though this Barcelona side should be favored over City, it has a way to go to equal the overall excellence of Guardiola's first Barcelona squad.

BARCELONA, April 1: Lionel Messi’s late heroics against Sevilla to snatch a 2-2 draw for Barcelona on Saturday showed it is... Read More...

Due to a somewhat busy schedule (and mostly because of my slothful behavior), I rarely get time to squat in... Read More...