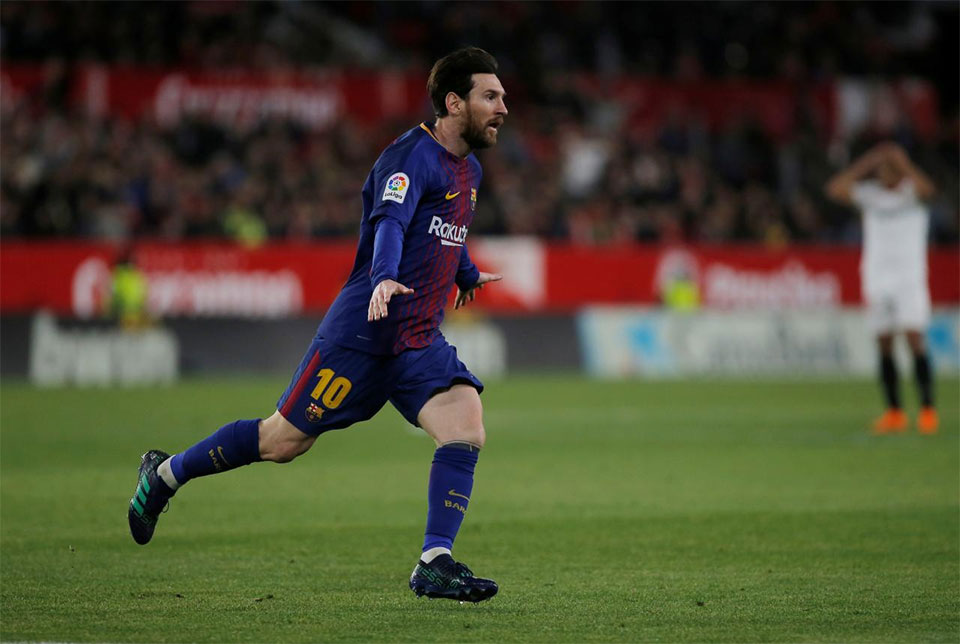 BARCELONA, April 1: Lionel Messi’s late heroics against Sevilla to snatch a 2-2 draw for Barcelona on Saturday showed it is not just Argentina who have an unhealthy over-reliance on the brilliance of the five-times world player of the year.

Messi was forced to watch his country’s humiliating 6-1 defeat by Spain on Tuesday from the stands due to continued muscle discomfort and as he sat in the dugout seeing Barca fall two goals behind to sixth-placed Sevilla, he might have reflected how much his club also seem to rely on him.

Messi’s 89th-minute leveller means Barca are still unbeaten in the league and Champions League but they looked glaringly vulnerable when their leader was not on the pitch.

Defender Samuel Umtiti made it easy for Franco Vazquez to give Sevilla the lead as he left the midfielder unmarked in the area, and the Frenchman was also slow to react in the lead-up to the second goal, scored by Luis Muriel on the rebound.

The damage could have been far greater had the home side not been so wasteful in attack, while Barca rarely looked like striking down the other end until Messi came off the bench to replace Ousmane Demebele in the 58th minute.

“Every time he touches the ball he is decisive, but we all knew that already,” said Barca coach Ernesto Valverde, who could not help but bring up what happened to Argentina against Spain while Messi was absent.

“Every team would be different with or without Messi, and I won’t mention what happened a few days ago,” Valverde added.

“We had planned for him to play even though he still has a bit of discomfort. He had gone a bit of time without playing and he needed to play.”

Barca were immediately lifted by the mere presence of their all-time top scorer and moments after he entered the fray as a substitute Luis Suarez hit the post before Rakitic struck the same post.

Suarez pulled a goal back in the 88th minute and 57 seconds later Messi met a cutback from Philippe Coutinho first time, smashing the ball under the grasp of Sevilla goalkeeper Sergio Rico and salvaging Barca’s long unbeaten league run, which was stretched to 37 games, one shy of a La Liga record.

“That is what Leo is all about as he keeps on showing us again and again,” Suarez said of his irrepressible strike partner.

“The team just kept on working and didn’t give up and it was down to him to score the equaliser.”

TEL AVIV, Nov 19: Argentina’s Lionel Messi scored an added-time penalty to salvage a 2-2 draw with Uruguay as they... Read More...

Barcelona says the Argentine Football Association has apologized for comments made by its national team coach Edgardo Bauza about Lionel... Read More...

50,000 metric tons of wheat required to address shortage
7 minutes ago