How they failed Nepal 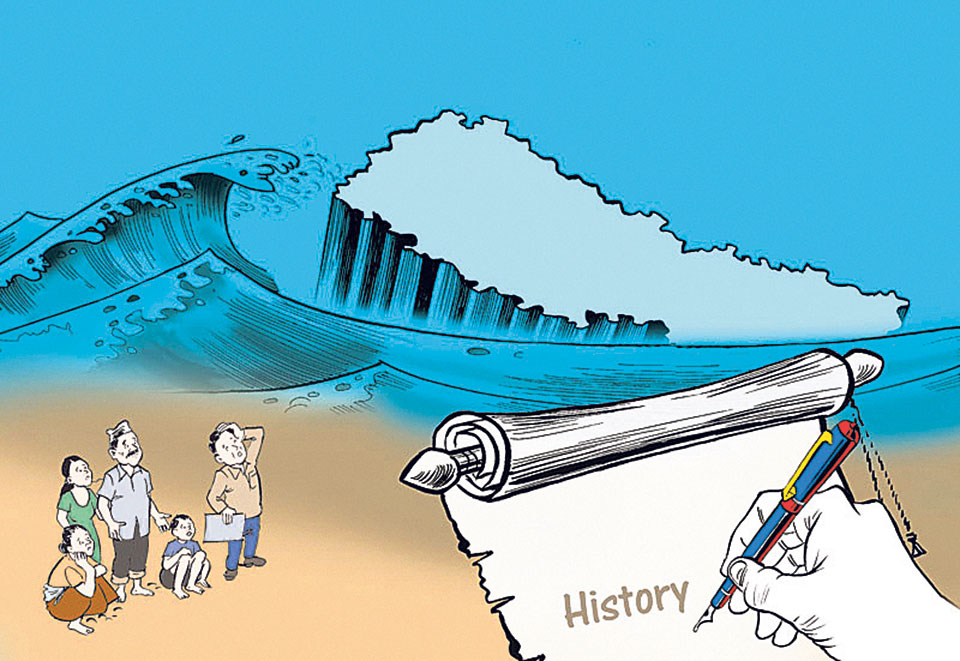 All we had to do was to protect a country that our ancestors had created by making great sacrifices but this is where we failed.

Don’t worry, fellow Nepalis, for the country is safe in the hands of crooks.

Yours truly thinks most of you guys, regardless of the very many stations of life that you may be in, worry a lot about this country, if the vibes he gets at every imaginable platform—social media, conversations in public places, social gatherings, the Press, among others—are anything to go by.

Despite your worries, this parcel of land spread in 1,47,181sq km (at least on paper), this slice of the Asian pancake sliced repeatedly to feed colonial-imperial ambitions seems to be going to the dogs and this causes you further worry.

At a time of yet another crisis in the life of this country, when the state seems to have failed yet again to take decisive steps for ensuring the inviolability of its borders and asserting national sovereignty, you may seek solace in the fact that our ancestors too used to worry a lot about this fatherland (pitribhoomi), this motherland (matribhoomi), this landmass consisting of the Tarai, the Hills and the Himalayas that is above high heavens for us.

Why worry?
This inter-generational worry about the existence of a country is quite natural, given that different nations located in the immediate neighborhood have vanished just like that, as if they were some thin, easily erasable pencil lines drawn on a piece of paper called the political map, as if some ambitious emperor had let loose a bunch of Shyamkarna horses like in the hoary past to make neighboring states either surrender or get ready for a war and those states opted for the former.

By the way, those Shyamkarna horses are not behind the violent shuddering of our embassy at Barhakhamba Road. Rather, it is the passing of the metro train through the railway line laid underneath the embassy. I leave it to the government and experts par excellence to explain whether this is not in contravention of international diplomatic practices. You see, our embassy—and our state—has such weak footing that it shakes at each passing of the train, while the dear neighbor’s embassy in Lainchaur does not even notice when we protest right in front against blatant encroachment upon Nepal’s sovereignty, territorial or otherwise.

If the modern history of this ancient country is any guide, successive generations of Nepalis who did not have to give blood, sweat, toil and tears for the unification of this country have spent a lot of energy worrying for this country. Apparently, our ill-equipped but courageous ancestors were too busy fighting their formidable enemies equipped with relatively modern weapons and did not have too much time to spend their energies worrying.

Enlightened readers, yours truly does not need to remind you all that failure of an ordinary individual primarily affects himself/herself. It surely affects the family and may affect the society a little bit. But when an authority figure fails, when a leader performs well below par, when a ‘savior’ turns out to be myopic and puts petty interests above national interest, the whole country suffers, generations of countrywomen and men suffer.

Who knows this better than the Nepalis?

Story of failures
Let yours truly recount some of the historical failures on the part of our rulers post-1945 with apologies in advance to those, who consider some of them to be no less than superhuman.

When the winds of change were blowing against Ranarchy in this land after our dear neighbor got independence from the British Empire, the Rana ruler struck the Treaty of Peace and Friendship in a last-ditch effort to save the dying autocratic regime after the royals fled (rather made to flee from their virtual detention) to land in the dear neighbor’s confinement. Ironically, this dash to ‘freedom’ would, later on, prove to be some sort of hijacking of the national sovereignty that was to be transferred from the autocratic regime to the Nepali people.

Thus, this treaty managed to kill two birds with a stone: Consign the Rana regime to history and weaken Nepal’s national sovereignty.

The follies of our rulers would not end there and then.

After the collapse of the Rana regime, a popularly-elected government came to power. The first democratically elected government of Nepal enjoying two-thirds majority in the Parliament may have done quite well on many counts, but two of its moves proved very harmful to the country.

The first was the signing of the Gandak Agreement that ended up severely weakening Nepal’s sovereignty over the Saptagandaki river system.  The second was the move to allow the establishment of Indian military posts on the northern parts of Nepal (Look at the irony of history: It would take an autocratic government to remove those posts!). Only a ‘democratic government’ can get away with such treasonous steps. Only in Nepal can the leader behind such steps earn the status of a Mahamanav (a superhero of sorts).

The Nepalis would realize soon that they had bid one dynastic rule adieu, only to see the advent of another dynasty of sorts in the democratic setup.

In a coup, the king removed the two-thirds majority government from power and appointed the elder brother of the former prime minister as prime minister.

One of the first things that this government did was to sign the Koshi Agreement with the dear neighbor (one would perhaps be naïve to think that this was done without a go-ahead from the king). This treasonous step would, as the Nepalis were to realize sooner than later, turn the mighty river called the sorrow of Bihar into the sorrow of Nepal by controlling floods in Indian territories, providing irrigational and navigational benefits, through localization of most of the disastrous impacts of the mighty river by means of a massive barrage built on our land. What a masterstroke from the dear neighbor and what a fatal blow to Nepal!

Fast forward to the Panchayat regime: The referendum that the regime under Surya Bahadur Thapa conducted to allow Nepali voters to choose between Bahudal and Nirdal was not that fair, to say the least. The regime is said to have brought in a sizeable number of ‘new voters’ from across the border to ensure its victory. Over time, this practice would gain currency in democratic elections.

After a 30-year stay in power, it was time up for the Panchayat regime. The pro-democratic and anti-communist winds of change blowing in Eastern Europe gave Nepal’s democratic-progressive front a boost, fuelling a mass movement in the 90s that led to the end of the autocratic regime and gave birth to a multiparty polity with constitutional monarchy.

Guess what one of the most important steps of the democratically-elected democratic government of the 90s would be? That would be entering into the Mahakali Agreement with the dear neighbor in a very opaque, conspiratorial and hasty manner, and selling the country down the river by compromising on national sovereignty, including water sovereignty, perhaps as a mark of gratitude to the dear neighbor for its support to the struggle against the Panchayat regime.

At that time, the largest party in power, sections of the communist party and a very prominent leader of the party of former Panchas had reasoned that this deal would lead to the new dawn of national prosperity from the backwaters of the West (the Far-West). More than two decades have passed since then but the promised dawn has not come as yet. While writing this piece on the wintry morning of December 8, a feeble sun is reminding yours truly of many such false dawns.

Back to the 90s. The new regime of kitchen cabinet members, riven by corruption—the Lauda Air scam, Dhamija scam, China South-West scam and the LC scam to name a few—was stewing in its own juice. As if internal anomalies were not enough, the Maoists were waging a war. Every movement, every rebellion is like a river system consisting of tributaries big and small and this was no different. Over time, the dear neighbor provided safe havens to the Maoist leadership, training to the guerrillas and their attacks got more vicious.

Anything can happen
The royal massacre that occurred on June 1, 2001 at the Narayanhiti Palace proved that anything could happen in this country without the state, including the government of the day and the security apparatus in charge, knowing anything about it. More importantly, this killing would mark the end of the monarchy with the royal family member, who was not trained to be the king, leaving the palace at the height of another movement after a short stint in power and a popularly-elected Constituent Assembly declaring Nepal a secular federal republic.

Despite ‘big changes’, there are things that remain constant here. Neighborly and international interests in Nepal’s internal affairs are a constant. That’s why we keep seeing diplomats enjoying unhindered access to corridors of power. That’s why we continue to see gifting of our lifelines, our rivers (the Arun River is the latest), a tributary of the Koshi river system.

What options do you have when all you get to do in periodic elections is choose from among crooks of all sorts? What can you do amid all this chaos except believe that the country is safe in their hands?

NEPALGUNJ, June 2: Nine people including some policemen were injured in a clash between police and members of a monarchist... Read More...

21 years since the royal massacre

KATHMANDU, June 2: Today marks 21 years since the Narayanhiti royal massacre. The true story of the massacre that took... Read More...